Measuring changes in the speed of electrical signals along nerves connecting the eyes to the brain may accurately reflect recovery from myelin loss in multiple sclerosis (MS), according to researchers at the University of Wisconsin–Madison, and could be used to evaluate new treatments for the disease.

Most MS patients develop a relapsing-remitting disease, in which bouts of numbness, weakness and vision problems come and go. Over time, many of those MS patients develop progressive MS, which just keeps getting worse as it eats away myelin — the insulating coating on axons, the connections between nerve cells — and subsequently, the axons are damaged.

“There are many treatments for people with relapsing-remitting disease which are quite successful in a lot of patients,” says Ian Duncan, a neuroscientist at the University of Wisconsin–Madison’s School of Veterinary Medicine. “And then there are the unlucky people who start out with primary progressive disease, or whose relapsing-remitting MS becomes what’s called secondary progressive MS. There are no effective treatments for them.”

In the normal nerve (a) all axons in the optic nerve are surrounded by thick, dark sheaths of myelin in contrast to the completely demyelinated nerve (b) during active disease (when VEP latency lengthens). After recovery (in c) axons have been remyelinated — and though the sheaths are thin compared to normal, the VEP latency has shortened. Image courtesy of Ian Duncan

At least, there are not yet effective treatments. Progressive types of MS are drawing the attention of pharmaceutical companies working to find drugs that help restore lost myelin, re-growing the insulation that supports proper nerve signaling and protects axons.

Unfortunately, confirming the presence of myelin in the central nervous system has required cutting into nerve tissue to take samples. That sort of destructive method confounds attempts to assess the effectiveness of new treatments in human patients.

Doctors often monitor their MS patients with a noninvasive test called the visual evoked potential, or VEP. Flashing a series of lights into the eye prompts a recognizable electrical signal that travels down the optic nerve from the retina. The signal is recorded in brain activity measured with electrodes on the scalp. 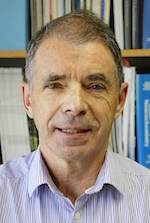 “There’s a time lag between the flashes of light and the brain activity. That’s called the latency,” says Duncan. “When that latency increases, it’s taking longer for the signal from the lights to get from the retina down the optic nerve to the brain. As MS progresses and demyelination of axons in the optic nerve worsens, the latency grows because the axons are not conducting the signal as well as healthy nerves.”

However, what if the latency was decreasing?

“If we could prove that a decrease in latency in the VEP truly reflected remyelination of nerve axons, then you’d have it,” Duncan says. “You’ve got a way to tell if there’s improvement in a patient, an outcome measure that can show whether the drug you are testing is successfully promoting myelin repair.”

Today (Dec. 16, 2019), Duncan and UW–Madison collaborators in ophthalmology, radiology, statistics, surgery and microscopy published in the Proceedings of the National Academy of Sciences a study that shows changes in VEP latency tracking demyelination and myelination in a feline model.

Cats fed irradiated food for several months develop severe myelin loss throughout their nervous systems — especially along their optic nerves. When the cats return to regular diets, nerve function is restored because of extensive myelin repair.

The researchers fed cats irradiated food, measuring VEP latency before the diet had demyelinated the cats’ nerves, during the cat’s neurologic symptoms, and after their recovery.

“The normal latency of the VEP in the cats is between 50 to 60 milliseconds. At the height of disease, it goes up to 90 to 110 milliseconds,” Duncan says. “And then, at recovery, it comes back down to around 60 to 70 milliseconds.”

Tissue samples confirmed the return of myelin along the nerve axons as the latency times decreased.

“Latency doesn’t fully recover because the myelin sheath in remyelination remains thinner than the original myelin,” says Duncan, whose work is supported by the National Multiple Sclerosis Society. “But we know from previous studies that thin myelin is enough to restore function and sufficient to protect nerve fibers in the long run.”

And now it’s clear that visual evoked potential is a true measure of remyelination.

“If you’ve got a drug to promote myelin repair in MS patients, we now have a proven outcome measure,” says Duncan. “VEP can accurately quantify the drug’s remyelinating effect in the optic nerve — likely reflecting remyelination throughout the central nervous system — and can help begin to sort the wheat from the chaff in potential remyelinating therapies for people with progressive MS.”