Using a new approach to target genetic mutations, eye researchers at the University of Wisconsin–Madison and University of Iowa are developing and testing a new therapy for restoring vision in children and adults with severe visual impairment or blindness due to certain kinds of retinal disorders. 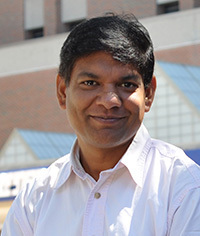 “For pediatric populations, this new therapy will be tested to treat inherited retinal disorders like Leber congenital amaurosis, Best disease, or more frequent congenital stationary night blindness,” says Bikash Pattnaik, UW–Madison professor of pediatrics and ophthalmology and visual sciences at the McPherson Eye Research Institute and the School of Medicine and Public Health.

The project, funded by a five-year, $7.7 million award from the National Institutes of Health National Eye Institute, will rely on an approach aimed at correcting nonsense mutations in DNA. These mutations improperly tell cells to stop reading the genetic instructions to create proteins, leading to proteins that are too short or otherwise dysfunctional.

Nonsense mutations are responsible for about 15 percent of inherited retinopathies and other inherited human diseases. In the eye, these mutations can cause severe disease and, if left untreated, can result in significant visual impairment and blindness.

The researchers will use something called anticodon edited transfer RNA to swap the correct instructions, or amino acids, in place of the nonsense mutations. There are very few human clinical trials at present exploring therapies for nonsense mutations, but the researchers say that newer technologies, such as the nucleic-acid therapy they are exploring, offer the potential to be both safe and effective. There are no approved drugs currently aimed at treating these kinds of defects.

“Targeting a therapy early on for most genetic disease is extremely important, but this therapy could be used for people of all ages based on clinical evidence,” says Pattnaik.

He and his UW–Madison colleagues — biomedical engineering professor Shaoqin (Sarah) Gong in the College of Engineering and the Wisconsin Institutes for Discovery, and David Gamm, professor of ophthalmology and visual sciences and director of the McPherson Eye Research Institute — are partnering with Christopher Ahern, a UW–Madison alumnus and professor of molecular physiology and biophysics at the Iowa Neuroscience Institute. They will focus on nonsense mutations in two cell types involved in converting light into visual images, and their initial studies will entail cellular and animal models.