Fast Plants Program’s new varieties are tailored for classroom use

A UW–Madison program built around plants that mature quickly enough to engage the scientific curiosity of elementary through college students is releasing two new varieties that make the popular plants even better suited to classrooms.

The Wisconsin Fast Plants are relatives of cabbage and broccoli that progress from seed to plant to flower in just 14 days, then on to seed by 40 days. Introduced by plant pathologist Paul Williams in 1987, the plants allow students to explore the effects of cross-breeding. In a single semester, students can emulate the experiments that Gregor Mendel used to set out the elementary principles of inheritance.

One of the new varieties clearly shows the successful transfer of pollen, which fertilizes the egg to start breeding and reproduction. The second variety shows, within a week, whether genes have moved, allowing quick interpretation of the effects of breeding different plants. 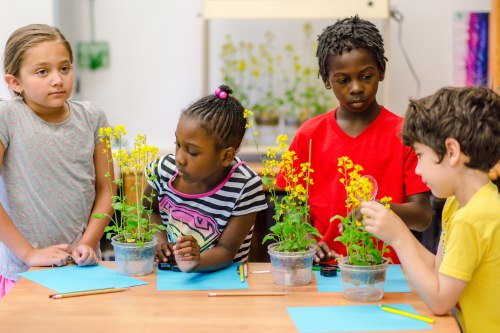 Students at Hawthorne Elementary School in Madison work with plants that grow fast enough to captivate their attention and allow a range of new classroom experiments. Jenna Stoughtenger/Sunshine Marigold Photography

These speedsters help teachers satisfy new science standards related to inheritance, and the growth and development of organisms, but the roots of Fast Plants are much deeper than that.

Williams, who was hired at UW–Madison in 1962 as a cabbage specialist to support Wisconsin’s vibrant sauerkraut industry, began collecting and cross-breeding thousands of Brassica varieties from around the world. Brassica is a broad genus that includes mustard, cabbage, rutabaga, broccoli and rapeseed, the source of canola oil. Members of the genus are also called crucifers, after the shape of the flower.

“One February morning in the early 1970s,” Williams recalls, “snow was on the ground outside the greenhouse that was built for me by the National Sauerkraut Packers. I was looking at several hundred Brassicas, and there was this one that was flowering — the descendant of a seed collected in North India.”

Williams started breeding that plant in a way that eliminated some genes unrelated to early flowering while favoring a short, stocky stature suited to the classroom and research laboratory. The eventual result was a plant that would flower within 14 days of planting, and yield a crop of seeds within 40 days. 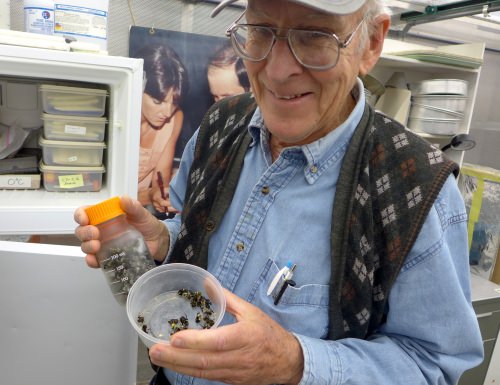 Paul Williams, founder of the Fast Plant program at UW–Madison, holds bumblebees that are used to pollenate the rapid-cycling Brassica plants. David Tenenbaum

With support from the National Science Foundation, Williams tapped science teachers to develop a curriculum based on the fast Brassica, and in 1987 initiated the Wisconsin Fast Plants Program to spread the word — and the seeds.

Fast Plants are licensed to Carolina Biological Supply, based on seed that is still cultured at UW–Madison. Dan Lauffer, Williams’ successor, estimates the plants are being used in at least 20,000 classrooms to teach genetics, biological development and evolution.

At one of those classrooms, in the Downtown Montessori Academy in Milwaukee, Jenny Aicher teaches a combined class of 1st, 2nd and 3rd graders. “Every year, we use Fast Plants to study the life cycle of plants,” she says. “We do environmental experiments: no light, no water, growing in sand or watering with salt water.”

Since kids are in the class for three years, “I was apprehensive about doing the same thing each year, but in the second year, I laid out the material, and the older kids started jumping up and down and cheering. That was pretty magical, and I thought, ‘I guess I’ll be doing this every year.'”

The Rapid-Cycling Brassica Collection is a component of the Fast Plants Program that makes about 190 strains of Brassicas available to researchers. The original patent on the fast-cycling Brassica, held by the Wisconsin Alumni Research Foundation, has expired, but WARF maintains the Wisconsin Fast Plants trademark, so it continues to earn money on Williams’ discoveries and leadership.

Williams, who retired 18 years ago, and Lauffer continue to breed Brassicas at the Biotron building on campus and in Williams’ basement, working to keep Fast Plants relevant.

Lauffer is anticipating how changes in classrooms will affect the plants. “Dan’s had the brains to wonder, ‘What is going to be the classroom lighting 10 to 20 years from now,’” says Williams, “and so he’s embarked on a program to breed plants and develop light boxes for the LED future.” 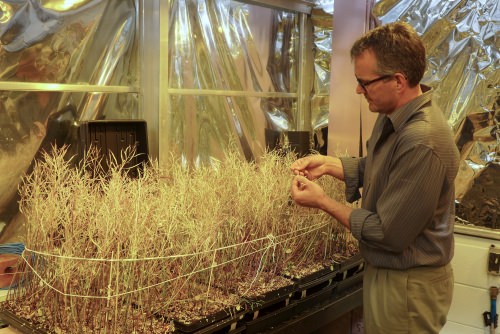 Meanwhile, Williams has focused on new, improved plants for the classroom. “Teachers tell us that when students deliberately pollenate the plants, they sometimes don’t make a connection between the movement of pollen and the genetic changes, because they can’t observe the yellow pollen on the yellow pistil. But yellow pollen is obvious on the new variety, with the red pistil, which clarifies how genes carried on the pollen alter the next generation of plants.”

In this digital era, “next generation” is much on Williams’ mind, as he persists at producing and promoting plants that portray some of the wonders of biology. All it takes is a cup, soil, water and light — and some amazing seeds.