Lakeshore researchers learn to fight weeds by studying them 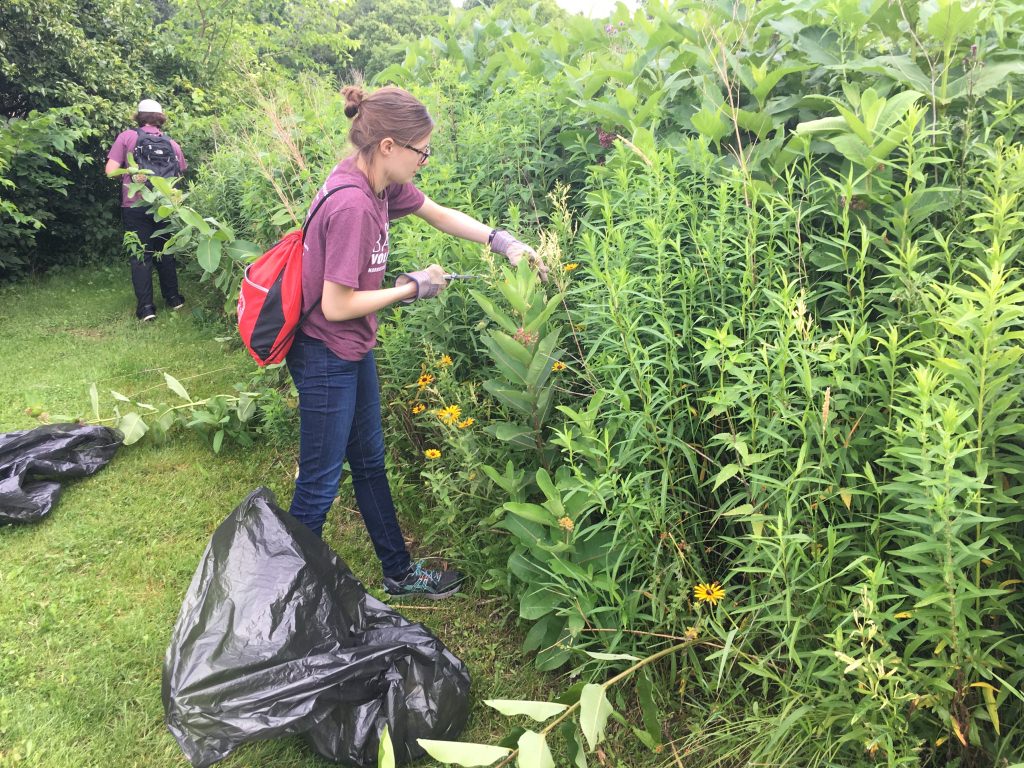 UW–Madison junior Meghan Collins, a member of Badger Volunteers, clips Canada thistle flowers in the Class of 1918 Marsh to help control the spread of the invasive plant. Eric Hamilton

On a humid late-June morning, University of Wisconsin–Madison junior Mel Jemiola reaches her clippers into the marsh and snips off the top of a Canada thistle, decorated with tufts of lavender flowers, and drops it in a trash bag.

One down. Hundreds more to go.

Jemiola is one of six students, part of the Badger Volunteers program, out on this day to help pare back invasive weeds in the Class of 1918 Marsh. They’ve come to help a collaboration between the Lakeshore Nature Preserve and weed scientist Mark Renz that is researching how to best control invasive species in disturbed environments in the preserve.

The Lakeshore Nature Preserve, which includes the Howard M. Temin Lakeshore Path, Picnic Point, and more than 300 acres of research space and natural areas, sees thousands of visitors each year. Weeds like Canada thistle and garlic mustard thrive in these disturbed environments, where bare soil and heavy traffic helps them overtake native plants. Many weed management techniques are designed for more wild environments, or for farms, but little is known about how to handle invasive species in these border areas. 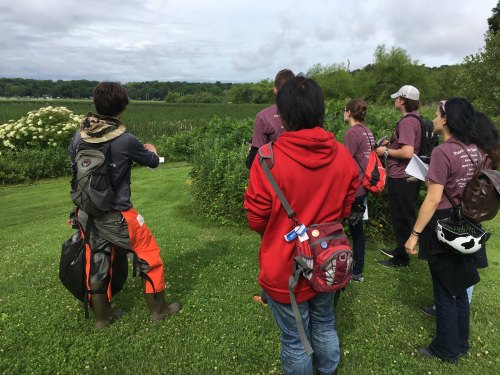 Last year, Wyatt reached out to Renz after an anonymous alum provided a gift for controlling invasive species in the preserve. Renz and Wyatt realized an opportunity not only to control weeds, but also to study which techniques were most effective. Together, they designed a three-year-long research project that would survey the invasive plant populations before, during, and after removal efforts. Their goal is to help the preserve manage invasive plants more effectively and to share their findings as widely as possible to help other land management organizations that face similar issues.

They are in the second of three years of the project, which is aided by student and other volunteers.

Anne Pearce graduated from UW–Madison in 2016 with her masters in water resources management before joining the weed management program in its first year. Now the coordinator of the invasive species monitoring program the Wisconsin First Detector Network, Pearce helps this year’s staff member, Leo Roth, survey the weed populations along several sites within the preserve. 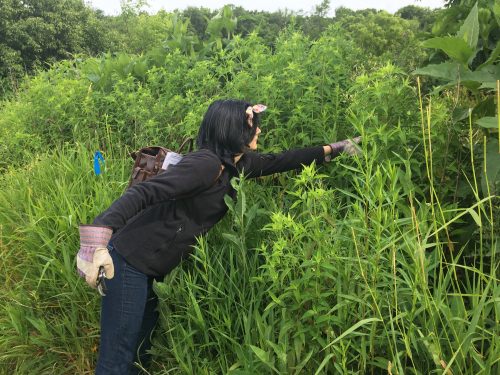 UW–Madison junior Mel Jemiola, a member of Badger Volunteers, clips Canada thistle flowers in the Class of 1918 Marsh to help control the spread of the invasive plant. Eric Hamilton

“The trails and roads are really good vectors to spread invasive species,” says Pearce. “So when you have lots of people that are coming from lots of different places and they’re all using this one trail in the Lakeshore Preserve, if they have seeds stuck on their shoes or pants from somewhere else, it’s just going to keep spreading along that trail.”

Roth, who recently graduated with degrees in geography and environmental studies from UW–Madison, oversees 12 student volunteers who help for two-and-a-half hour shifts once a week. As Jemiola and the other students gathered around the Class of 1918 Marsh for their second week of volunteering, Roth walked them through aerial photos of the preserve over the decades, which showed abandoned farms quickly being overtaken by woods. Together, they discussed plant identification and weed management techniques.

Then they headed into the marsh to begin tackling the Canada thistles, trying to clip their flowers before the invasive plants set seed and spread even further.

Jemiola and the other students were drawn to the project by the chance to work outside and to give back to the preserve. Whether by living in the Lakeshore Residence Halls, or by going on runs along the Lakeshore Path, they each had some connection to the preserve and wanted to learn more about its care.

“There’s a sign by the entrance to Picnic Point saying ‘Thank you volunteers’ and I thought maybe I could volunteer, and I found this project,” says Jemiola of discovering the weed management project. “It’s nice because it’s a couple hours I get to be outside.”

The Badger Volunteers’ eight-week program means the students can participate in increasingly complex and independent management techniques as the summer goes on, says Roth. The Lakeshore Nature Preserve has also recruited committed volunteers from the Madison community who can work with little supervision.

As part of their research, Renz and Pearce are developing the Invasive Species Management Tracking System to assist in monitoring. This suite of resources, which includes a smartphone app, allow volunteers to snap pictures of invasive plants, mark their GPS location, and add in detailed information about time spent pulling weeds. This information will make future surveys more accurate and help the researchers determine which management techniques best use limited volunteer time. They are rolling the app out to researchers in Wisconsin and Minnesota.

“Now we’re coming back one year later to see if after one year of application, has anything changed,” says Renz. “Now is the real exciting time.” 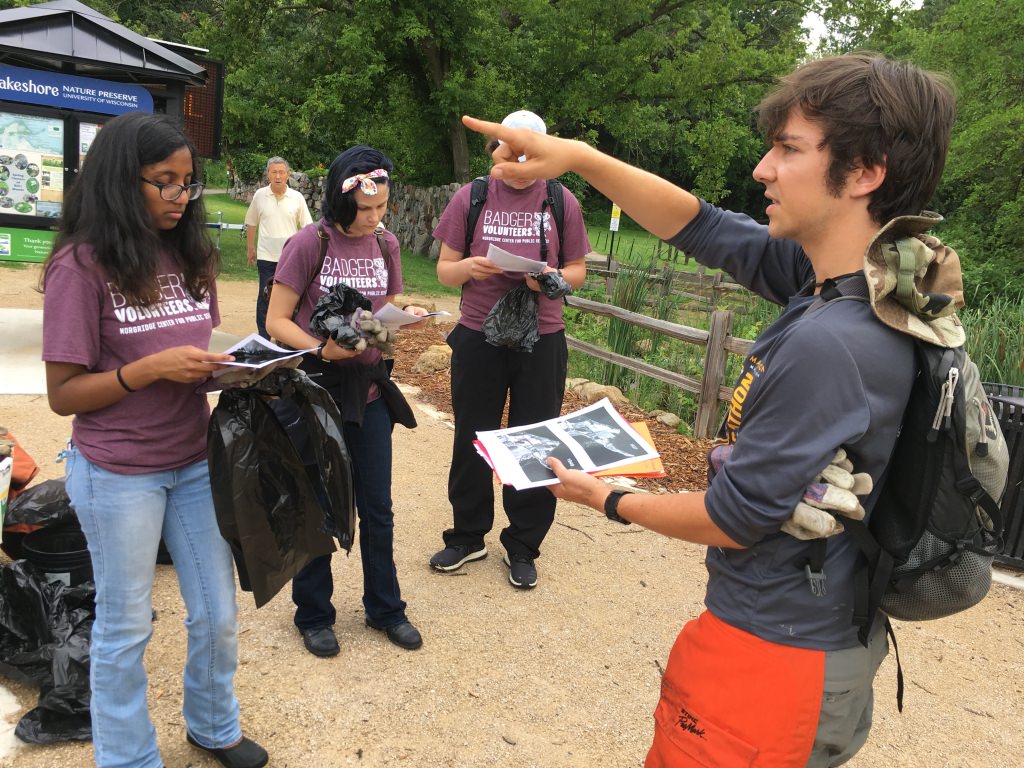 Lakeshore Nature Preserve weed manager Leo Roth (right) uses aerial photographs to discuss changes to the preserve over the decades with Badger Volunteer members during a work party at the Class of 1918 Marsh. Eric Hamilton