A groundbreaking atmospheric scientist, a brilliant U.S. diplomat and an esteemed businessman and philanthropist will be awarded honorary doctoral degrees at the University of Wisconsin–Madison in May.

The recipients are David Fahey, whose research has helped protect the Earth’s ozone layer and climate; Linda Thomas-Greenfield, a former ambassador to Liberia lauded for her international humanitarian work; and Jerome Chazen, a co-founder and former chairman of Liz Claiborne Inc.

The honorary degrees, as well as doctoral, MFA and medical professional degrees, will be conferred at the 5:30 p.m. commencement ceremony on Friday, May 11, at the Kohl Center. 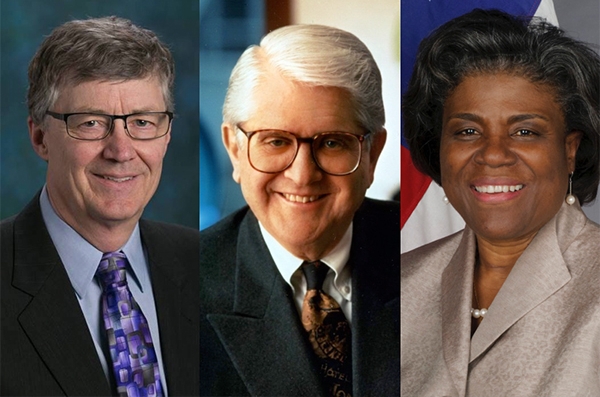 Honorary doctorates from UW–Madison recognize individuals with careers of extraordinary accomplishment. The Committee on Honorary Degrees considers sustained and uncommonly meritorious activity exhibiting values that are esteemed by a great university. Preference is given to people connected in some significant way to the state or university, though that is not a prerequisite.  All three of this year’s honorees are UW–Madison graduates.

David Fahey conducts leading-edge research on atmospheric trace gases and aerosols. He’s considered one of the world’s top climate scientists, credited with helping prevent great harm to humanity through his contributions to an international treaty known as the Montreal Protocol. The protocol, agreed to in 1987, has led to the global phase-out of the most harmful ozone-depleting substances.

Fahey was jointly nominated for the honor by the UW–Madison departments of Physics, Chemistry, and Atmospheric and Oceanic Sciences.

“Dr. Fahey’s research contributions in the area of ozone depletion have significantly enriched scholarship on the ozone layer and made a notable contribution to ongoing global efforts towards the protection of the ozone layer and mitigation of climate change,” writes Tina Birmpili, executive secretary of the Ozone Secretariat, United Nations Environment Programme, in a letter supporting Fahey’s nomination. “His work has been of immense value to the 197 parties to the Montreal Protocol, which is widely recognized as the most successful international environmental agreement.”

Fahey is considered one of the world’s top climate scientists, credited with helping prevent great harm to humanity through his contributions to the Montreal Protocol.

Fahey was born and raised in Madison and graduated from Edgewood High School in Madison. After graduating from UW–Madison in 1975 with a bachelor’s degree in physics, Fahey earned a Ph.D. in physics from Missouri University of Science and Technology in Rolla. He has worked for more than 35 years for the National Oceanic and Atmospheric Administration. He currently directs its Chemical Sciences Division at the Earth System Research Laboratory in Boulder, Colorado.

In his early scientific work, Fahey developed instrumentation for high-altitude research aircraft to study the gas-phase and aerosol composition of the lower stratosphere and upper troposphere. Later studies have focused on the presence of black carbon in the atmosphere and its effect on global warming. He was a lead author of the 2017 Climate Science Special Report of the U.S. National Climate Assessment.

Ambassador Linda Thomas-Greenfield has been heralded as one of the most dynamic and effective diplomats of her time and one of the most respected leaders at the State Department. Her career in the U.S. foreign service spanned 35 years, most recently as assistant secretary for African affairs in the Obama administration.

Thomas-Greenfield was nominated jointly by the Department of Political Science and the African Studies Program.

“She began her career as a scholar of Africa at the UW Department of Political Science and carried that passion and expertise into her long, distinguished diplomatic career, where she broke racial and gender barriers, excelled in diverse key areas and oversaw several major foreign policy initiatives, while ascending to several senior leadership positions at the Department of State,” writes J. Stephen Morrison, senior vice president at the Center for Strategic and International Studies in Washington, D.C., in a letter supporting her nomination.

Thomas-Greenfield earned a master’s degree in public administration in 1975 from UW–Madison, where she also did work toward a doctorate.

Beyond her Africa career specialization, Thomas-Greenfield played an important role in humanitarian and refugee affairs, earning praise for her work in Pakistan, Kenya and Geneva. She served as director general of the foreign service, a position that also includes the title of director of human resources. She led a team of approximately 400 employees who handled the full range of personnel functions for the State Department’s workforce of 70,000 employees. Thomas-Greenfield was ambassador to Liberia from 2008 to 2012, a critical period of reconstruction in the country after nearly 15 years of conflict.

She is now a distinguished resident fellow in African studies at the Institute for the Study of Diplomacy at Georgetown University. She also is senior counselor at Albright Stonebridge Group, a global strategic advisory and commercial diplomacy firm in Washington, D.C.

Jerome Chazen rose to the top tier of business retailers as one of four founders in 1975 of Liz Claiborne Inc. By 1989, Fortune magazine recognized it as the largest women’s apparel company in the country.

“Attuned to the social changes of the times, the company focused on providing quality clothing at reasonable prices for women who, for the first time, were entering the workforce in significant numbers,” writes nominator John Karl Scholz, dean of the College of Letters & Science at UW–Madison. “Discarding traditional ways of doing business, Mr. Chazen was largely responsible for the innovative sales, marketing, distribution and licensing programs that were an integral part of Liz Claiborne Inc.’s success.”

He is now chairman of Chazen Capital Partners, a private investment firm he founded. While succeeding in business, Chazen has been driven, along with his wife, Simona, to better the world through philanthropy. He has given his time and financial resources to improve the lives of abused women, enable U.S. students to gain a global education and promote the importance and accessibility of the visual and musical arts.

While succeeding in business, Chazen has been driven, along with his wife, Simona, to better the world through philanthropy.

Chazen earned a bachelor’s degree in economics from UW–Madison in 1948 and credits an undergraduate art history course with awakening his interest in the visual arts. In 2011, the new Chazen Museum of Art opened at UW–Madison. The Chazens provided the lead gift and have made a promised gift of much of their art collection.

Other examples of the couple’s generosity abound, including the gift to establish the Jerome A. Chazen Institute for Global Business at Columbia University. He is a major supporter of the Museum of Art and Design in New York City, where he is chairman emeritus. The Chazens also are involved in many other civic and cultural organizations in the New York area and nationally.

He was jointly nominated for the honor by the Chazen Museum of Art, the Art Department, the Art History Department and the College of Letters & Science.

For more information on UW–Madison’s spring commencement, including a list of degrees that will be conferred at the May 11 ceremony, visit commencement.wisc.edu.