Sarah Mangelsdorf still tells the story of her first day on campus, Aug. 4, 2014 — a large portrait photo of her was posted to the university’s home page to accompany a welcome interview.

Later that same day, a WiscAlert was posted to wisc.edu warning campus of an armed and dangerous woman sought by police. Because of the way the photo and alert were juxtaposed on some browsers and mobile phones, it appeared that Mangelsdorf was actually the person being sought by police, as opposed to the one being welcomed.

Although she was the focus of attention that week, for much of the past five years, the departing provost and vice chancellor for academic affairs has provided strong leadership and driven core initiatives while largely staying out of the limelight. 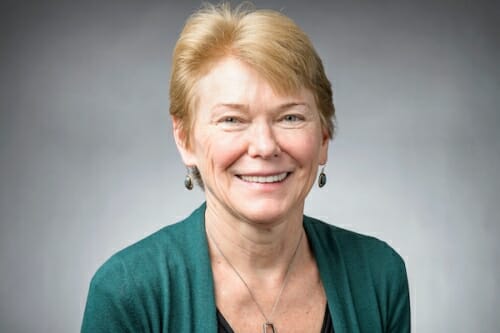 Sarah Mangelsdorf, provost at the University of Wisconsin–Madison, is pictured on Jan. 19, 2018. Photo: Bryce Richter

In that time, she has overseen teaching, undergraduate education and the faculty, along with a range of important services. Along the way, she made important changes to the way the academic side of the university operated and realized gains in student success, fundraising and rankings.

Her last official day was Monday, June 3, and she’ll arrive in Rochester, New York, to begin her new role as president of the University of Rochester on July 1. Mangelsdorf will be replaced on an interim basis this summer by former UW System Vice President Jim Henderson, before Letters & Science Dean Karl Scholz formally succeeds her in August.

Her time on campus began with formidable challenges around UW’s relationship with the legislature, budget cuts, changes to the UW mission statement and removal of tenure from state statute. Through hard work, it ended with a Wisconsin rebound: The successful retention of many faculty, new resources from initiatives like Summer Term, undergraduate enrollment growth and improved relations with the state have allowed the university to do innovative programs like cluster hires and the Target of Opportunity Program.

Before departing, Mangelsdorf took time to reflect on her UW years. The following interview was edited for space and clarity.

Inside UW: What are you most proud of?

Sarah Mangelsdorf: I feel that we’ve accomplished a lot and that I’m leaving the place better than I found it. I say this not because of things that I personally did, but because we all worked together as a team on a number of key strategies and we got a lot accomplished.

My first year, there was anticipation we would get a budget cut, so instead of being able to be inspirational/aspirational and think, “Where are we going next?”, our focus was, “How do we hunker down and protect the core and the quality of education?”

I also remember the surprise that came when tenure was removed from state statute. It did terrible psychic damage to campus, even though we ended up in a good place with a tenure policy very similar to other institutions around higher education. … [It resulted in] more of our faculty being recruited by other institutions that year than any other year in the history of the university. But we did a great job of retaining them.

So, I think that the budget cut and removal of tenure from state statues affected morale, but we rallied and came together to think about things that could work better than they were.

iUW: What were some examples of those initiatives?

SM: For example, when I arrived, I noticed that our summer school enrollments and revenues were smaller than any of the other places where I had worked. I thought, “If I were an undergraduate, would I rather be in Champaign-Urbana where I was on the faculty at the University of Illinois for 16 years or in the summer here in Madison?”

We had to revise the budget model to incentivize people to teach courses that students wanted and need to take during summer. Over the last four years, including this summer, enrollments and revenues have grown by about 10 percent each year.

Summer school has been a real success and it has also in helped with another project that the team has worked on — time to degree. We as a country are very concerned about student debt, and we should be.

The longer it takes students to get through college the more it costs, so we worked to identify the variables that are associated with students taking longer to graduate and we have worked on fixing as many of them as we could. Offering key general education courses in summer school is a real help. We have significantly brought time to degree down and our graduation rates have gone up.

Also, the way the deans have rallied around fundraising — and the ($129 million) Morgridge Match, which was an amazing success and came at a perfect time for our campus. It helped us envision an improved future — the most recent statistics show that UW–Madison now has the second-largest numbers of endowed chairs of any of the public universities in the Big Ten, and that is really because of the Morgridge Match. It was a transformational gift. The deans were really entrepreneurial the way they just got out there and approached people about giving, the donors rose to the occasion and the Morgridges, of course, were and are wonderful.

iUW: Are there other efforts that you’re especially proud of?

SM: I’ve been an advocate for the Target of Opportunity program and the cluster hire program and putting more money in for faculty startups and retentions, and really working on faculty and staff salaries and graduate student stipends. I know graduate students don’t feel that we’ve done much for them, and that makes me sad. I’ve been such an advocate for raising their stipend levels. I believe we have increased their stipend levels by 40 percent since I have been here. In all those areas, we’ve come together and done great things. I’m also proud that we did as good of a job of retaining as many faculty as we did [when they were being heavily recruited].

iUW: Is there anyone you want to acknowledge?

SM: I have worked with so many great people here — what a great team we have in Bascom! I feel like the Chancellor’s Executive Team and the people in the Provost’s Office have been amazing. And I have worked with a great group of deans. Even in the worst of times, we were all trying to row in the same direction. We all wanted what was best for the university.