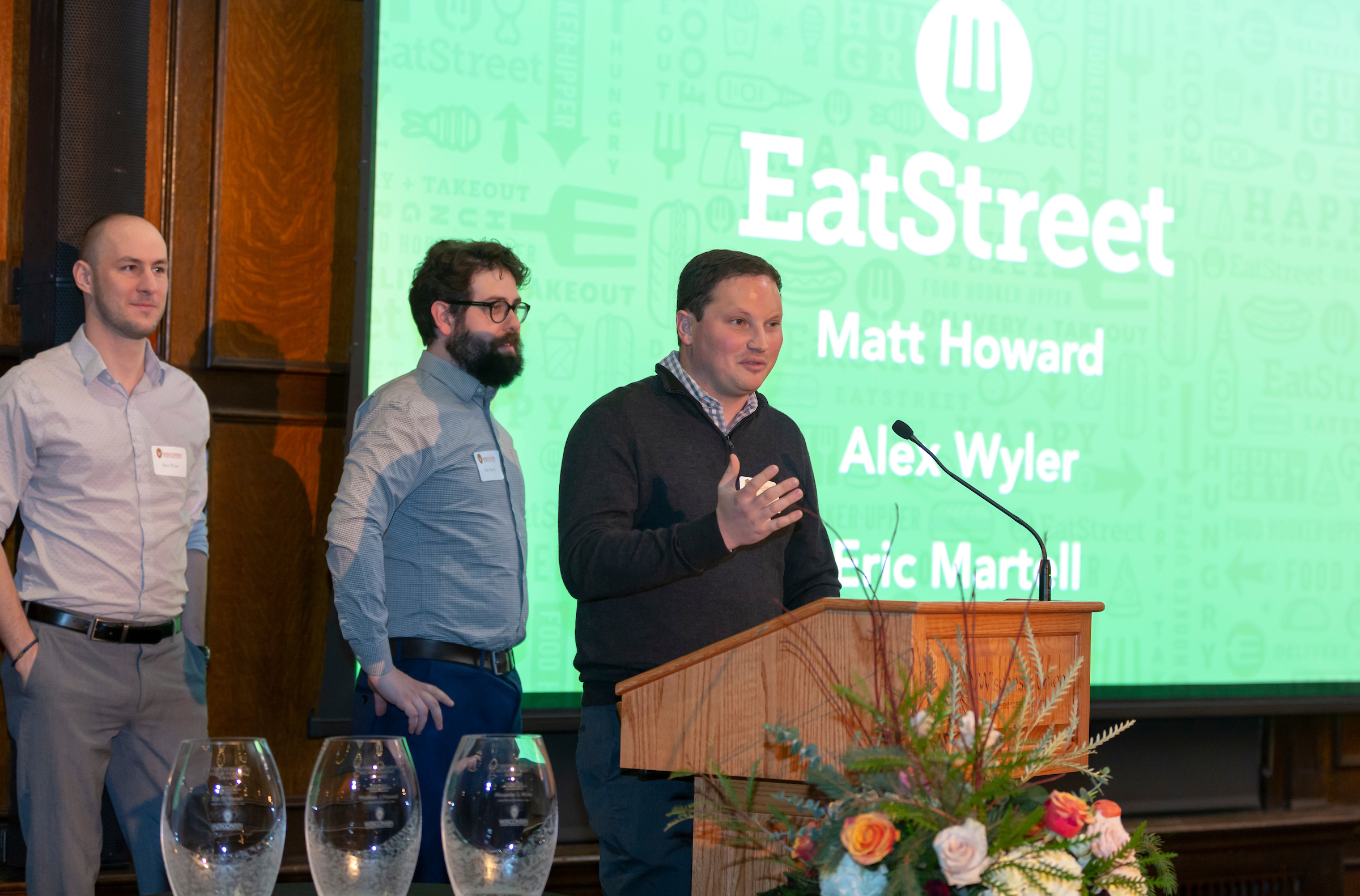 The founders of EatStreet, a national food ordering and delivery company, were honored Nov. 14 with the UW–Madison 2018 Entrepreneurial Achievement Award.

EatStreet is rooted in Madison, where in 2010 three UW–Madison undergraduates grew frustrated with a clunky restaurant takeout ordering process. In response, Matt Howard, Eric Martell and Alex Wyler “cooked up” an improved, online ordering technology, and began systematically selling it to restaurants nationwide.

“To be able to come back and accept this award validates that we made the right decision to pursue this opportunity after college,” says Howard, the company’s chief executive officer. “We are very fortunate for the support Madison and the University of Wisconsin have shown, and continue to show, over the years.”

EatStreet now serves more than 15,000 restaurants in more than 275 cities. It has 175 employees at its headquarters, just off the Capitol Square in Madison, and more than 1,200 drivers.

While presenting the award, Chancellor Rebecca Blank said, “Matt Howard, Alex Wyler, and Eric Martell have not only changed the way millions of people around the country order food, they have also inspired the students who came after them.  They are role models, showing what is possible, and inspiring current students to try out new ideas.”

The award, Blank said, “was created eight years ago to honor our talented alumni and faculty who have achieved success as entrepreneurs, built successful companies that create jobs and contribute to economic growth, and have stayed connected to UW – as role models, advisors, contest judges, guest lecturers, and much more.”

UW-Madison has become a hotbed of university spinoffs, she said. “Pitchbook Data, which tracks where private equity investors are putting their money, just named UW–Madison 15th among all universities in the world for producing entrepreneurs backed by venture capital.  UW–Madison is number one in the Big Ten (and number eight worldwide) in U.S. patents issued to universities.”

Howard, who returns to teach classes and mentor students, says UW–Madison continues to expand the resources offered to its student entrepreneurs. “This dedication to helping our entrepreneurs succeed will be a driving force to make Madison a tech hub and put it on the map for venture capital investments.”

“Every year we get about 6,000 of the country’s smartest 18-year-olds,” says Allen Dines, executive advisor with the Madison investment firm WISC Partners, “and what do they want? They want to learn … they want to make the world a better place… That is to me the perfect recipe for how you can take your own incentives and build something, and the community here and the university, is a great place for that.”