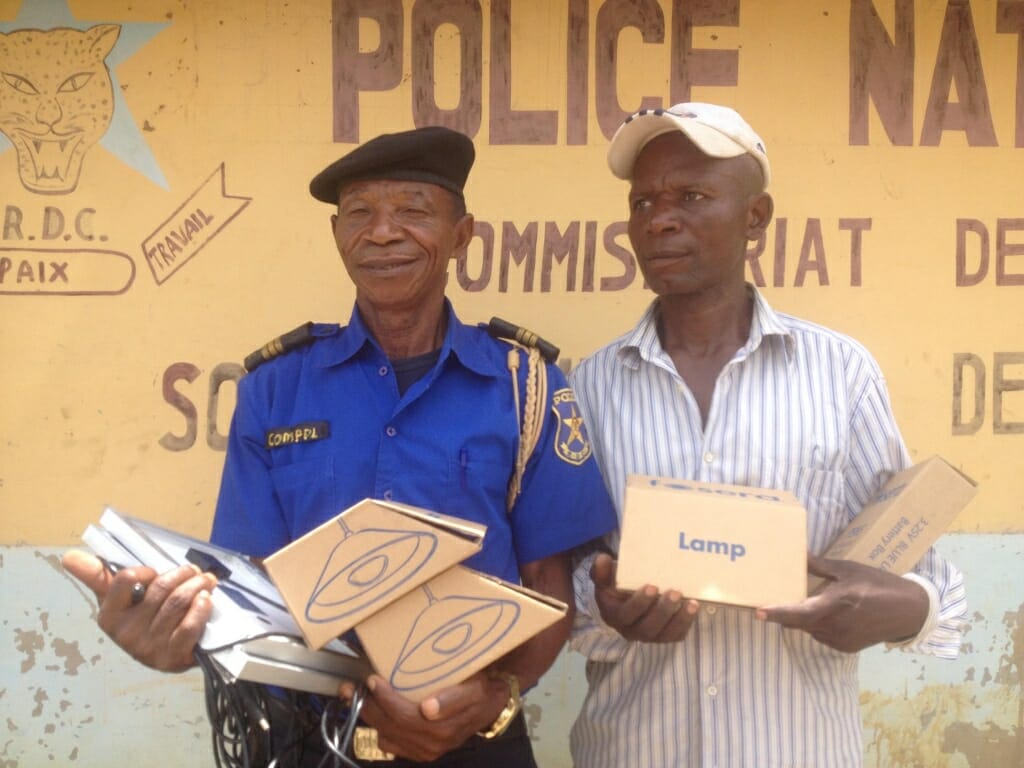 Some NovoMoto customers in the Congo. Photo courtesy of NovoMoto

NovoMoto, a spinoff from the University of Wisconsin–Madison, is finishing its first 100 solar lighting installations in the Democratic Republic of Congo.

NovoMoto LLC distributes the systems on a rent-to-own basis on a plateau about 80 kilometers from the capital, Kinshasa. After a $10 down payment and three years of paying $2.15 a week, the customer owns the system.

If you take electric lighting for granted, you have not lived in the Democratic Republic of Congo, says company co-founder Aaron Olson. In rural villages, he says, lighting options come down to kerosene (dim and dangerous), candles (dim and short-lived) or flashlights with single-use batteries (dim, short-lived and expensive).

Lighting in rural Congo comes down to kerosene, candles and flashlights.

None of these sources are adequate, he says, yet they cost about one-third of the average family’s income.

Olson and his fellow co-founder, Mehrdad Arjmand, have a better idea: small electric systems equipped with a solar panel, battery and controller.

The company’s secret sauce is a digital code that unlocks the system, sent via text message after it receives each weekly payment. After the last payment, the final code unlocks it permanently.

Another 100 NovoMoto systems will reach the capital, Kinshasa, within three weeks or so, says Olson. NovoMoto has obtained financing for another 450 systems to be assembled and shipped later this year.

NovoMoto would not exist without UW–Madison, says Olson, who is completing a Ph.D. in engineering mechanics at UW–Madison.  Arjmand recently earned a Ph.D. in the field.

The germ of the idea arose in 2015 as Olson and Arjmand prepared for the Weinert Applied Venture in Entrepreneurship class in the school of business. Talking with Selam Zewdie, a native of Ethiopia, they narrowed their focus to a business involving solar electricity for underserved third world locations.

“As we started the class, we were thinking about Sub-Saharan Africa and India, where people were starting to sell pay-as-you-go solar electricity kits,” Olson says. 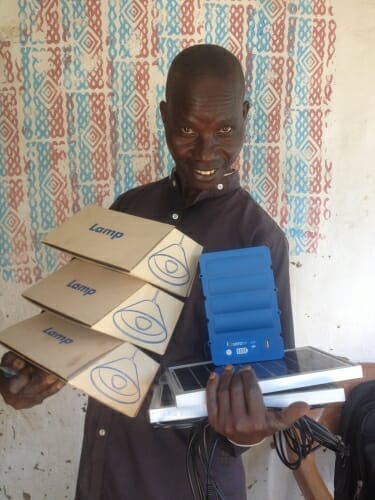 The rent-to-own solar lighting system was greeted with a smile recently in the Democratic Republic of Congo. Photo courtesy of NovoMoto

Congo was a natural focus, he adds, since he was born there and a cousin of his was trained in solar installation in Kinshasa. Rural parts of the nation of about 80 million were also severely underserved with electricity.

Olson left Congo with his parents shortly after his second birthday and returned to his father’s native Wisconsin. In January, 2015, Olson made his first visit as an adult. His father, a UW–Madison alum who had been in Congo in the Peace Corps and then worked in international agriculture, had passed away by then, so Aaron traveled for several weeks with his mother, Agnes, and brothers Amisi and Alvin.

“Visiting gave me a different perspective,” he says, and lighting seemed a particularly acute need – and business opportunity. “I knew that people were succeeding in the rent-to-own model for solar lighting in other places, and I had just seen a place that could benefit, a place where I had family ties. All of this molded how I thought about what we’d been talking about in class, and made it seem much more realistic.”

The original idea, designing their own equipment, was quickly pushed aside when they looked at existing equipment. “Do we spend money on product development at this point or work with an established solar kit supplier?” Olson says. “It was a matter of funds and time.”

Raising money is always difficult for startups, but by mid- 2016 NovoMoto had raised $110,000 from two U.S. Department of Energy grants, and an investment from the Clean Energy Trust of Chicago.

By May 17, 2017, NovoMoto was serving eight pilot customers in Mboka Paul, a village northeast of Kinshasa. Building on lessons from the pilot, they began planning the first 100 installations.

The company’s entry-level package can store 20 watt-hours even on a cloudy day. That is enough to charge a mobile phone, and power six hours each on two indoor lamps, plus 12 hours for one outdoor lamp.

Combined, these three bulbs emit as much light as a 40-watt incandescent bulb.  “This may not sound like much to those in a developed country, who get electricity from a utility, but it’s a stellar improvement over candles, batteries or kerosene. The response in Mboka Paul confirms this,” says Olson.

The larger package adds several hours of television usage to the mix. 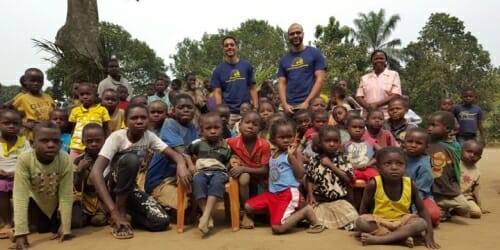 This school for orphans in Mboka Paul now has a solar lighting system, donated by NovoMoto LLC. In blue shirts are founder Aaron Olson (center-left) and his brother, Alex Olson. Photo courtesy of NovoMoto

Although homeowners are the primary market, NovoMoto has done free installations in a school and a clinic in each village it serves, Olson says. NovoMoto is also developing packages tailored to larger business needs like refrigeration and electric bike charging.

The young spinoff has made an auspicious start, says Dan Olszewski, director of the Weinert Center for Entrepreneurship in the School of Business. “They went there for two reasons. Aaron is a Badger, a Wisconsin guy, but he has family there, and they are involved in the business. And though it’s a tough environment, they have opportunities as well. The fact is that many villages are off the grid and don’t have any power coming in, and don’t even have a real plan to get it. With entire cities off the grid, there is a large opportunity.”

NovoMoto is prepared for rapid growth, and is aiming for 2,000 customers at the end 2018 and 20,000 by the end of 2019. That expansion includes a gradual transition – already under way — to a “mobile money payment system that can eliminate the problem of having to go out and collect cash,” Olson says.