A changing climate is altering the ability of Rocky Mountain forests to recover from wildfire, according to a new study published in the journal Global Ecology and Biogeography.

When warm, dry conditions lead to drought in the years following fires, it impedes the growth and establishment of vulnerable new post-fire seedlings. The study also shows that forest recovery has been negatively affected by increased distances between burned areas and the sources of seeds that typically replace trees lost to fire.

“Fires that are followed by warm, dry conditions offer us a window into the future,” says Brian Harvey, lead author of the study and a former University of Wisconsin–Madison graduate student in the laboratory of Monica Turner, E.P. Odum Professor of Ecology and Vilas Research Professor of Zoology. Harvey is now a postdoctoral Smith Fellow at the University of Colorado Boulder. 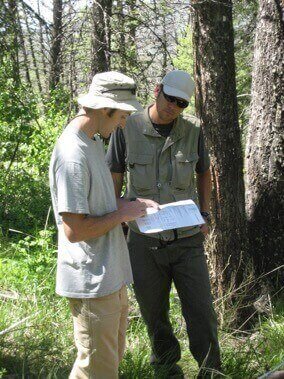 “From all the best available data and modeling, and expectations about future climate, these are the kinds of fires and post-fire climates that we’re going to see more of in the future,” he says.

The new data positions researchers to better understand how forests could change in coming decades and may yield valuable information for the development of robust simulation models. Turner says the dataset — which is the first to comprehensively demonstrate the impact of drought on forest recovery in the context of a changing climate — “provides unambiguous evidence that the climate conditions following fires are really going to matter.”

The forests of the Rocky Mountains are well-adapted to fire. For instance, lodgepole pines, a dominant species in the Mountain West, possess seed cones that are opened by fire, with each tree releasing thousands of seeds when burned. However, how the forests will adapt to a changing climate is still unknown.

“Fires that are followed by drought — which we are very likely going to see more of with climate change — really do set a new context in which these forests are not recovering as quickly,” says Harvey. “It’s a double whammy because even if seeds can get to a burned patch, they still need to survive once they get there. That may be much harder to do in a warmer, drier climate.”

The Turner lab’s interest in how forest recovery after fire may change in the future began in the summer of 2000, when large wildfires raged across the southern portion of Yellowstone National Park in Wyoming. Thousands of acres of forest burned.

Turner had previously studied the massive 1988 Yellowstone Fires and in the summers following the 2000 Glade Fire, she and collaborators visited the forest to collect as much data as possible. They were surprised to see that tree density in the years after the 2000 fire was 10 times lower than comparable forests recovering from the fires of 1988.

A plausible explanation? The year following the Glade Fire was unusually hot and dry, with just 30 percent of normal summer precipitation. But one fire followed by a dry summer could not provide the data to rigorously test the theory. 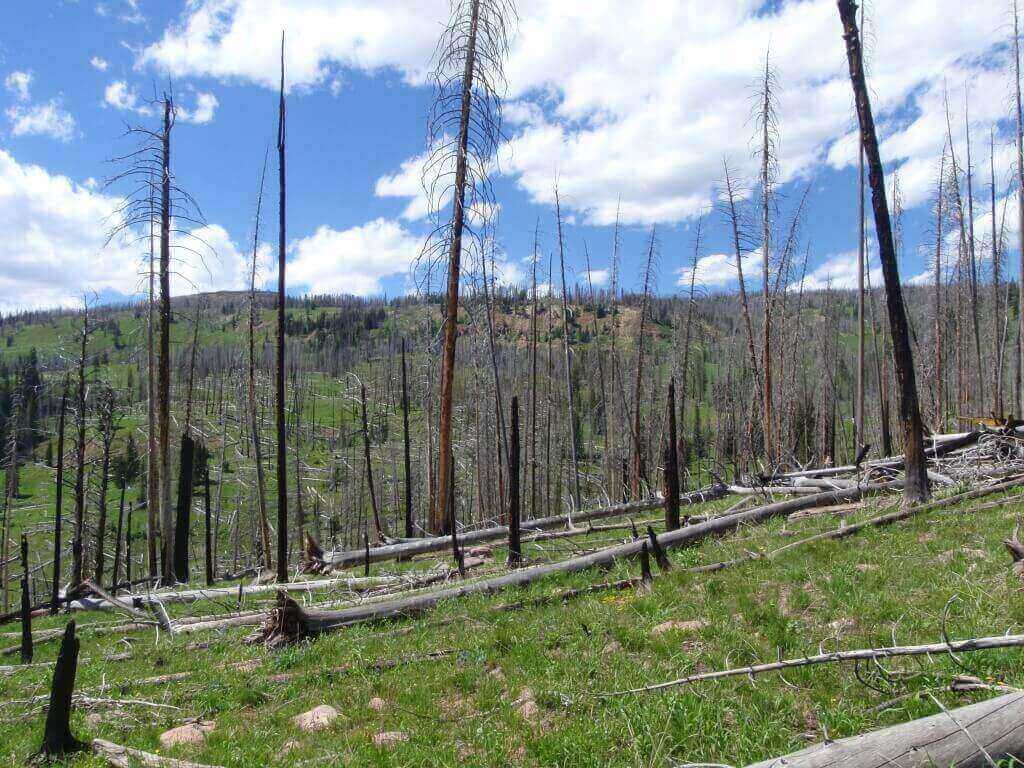 Very sparse post-fire tree regeneration following the Beaver Creek Fire (near Yellowstone National Park in 2000), which was followed by three years of severe drought. This photo was taken far from the edge of a stand-replacing burn patch – away from surviving seed sources. Photo Courtesy of Brian Harvey

By 2013, however, multiple well-documented fires had burned throughout the Rockies and that summer, Harvey conducted field studies in Yellowstone and Glacier national parks.

He and the research team visited 184 sites where 11 wildfires burned between 1994 and 2003. The work was exhilarating, but also grueling, he says, as most sites were well off trail in the backcountry of some of America’s wildest places and the research team was on its hands and knees examining nearly 10,000 individual tree seedlings.

The team collected data on the overall character of the forest before fire and the number, species, size and age of trees after fire; the ground cover on the forest floor (for example, the presence of shrubs or grasses) following fire; and other qualities of the site, such as whether the forest stands were on cooler/moister north-facing slopes or warmer/drier south-facing slopes.

The researchers also turned to existing climate records to assess the drought severity of each location in the three years immediately following each fire and examined the distance from each plot to the nearest source of seeds — other still-living trees typically outside the burn patch.

“By going into areas that had burned at least 10 years ago — enough time for many post-fire tree seedlings to establish — we were able to characterize how these forests will likely look for some time in the future,” says Harvey. 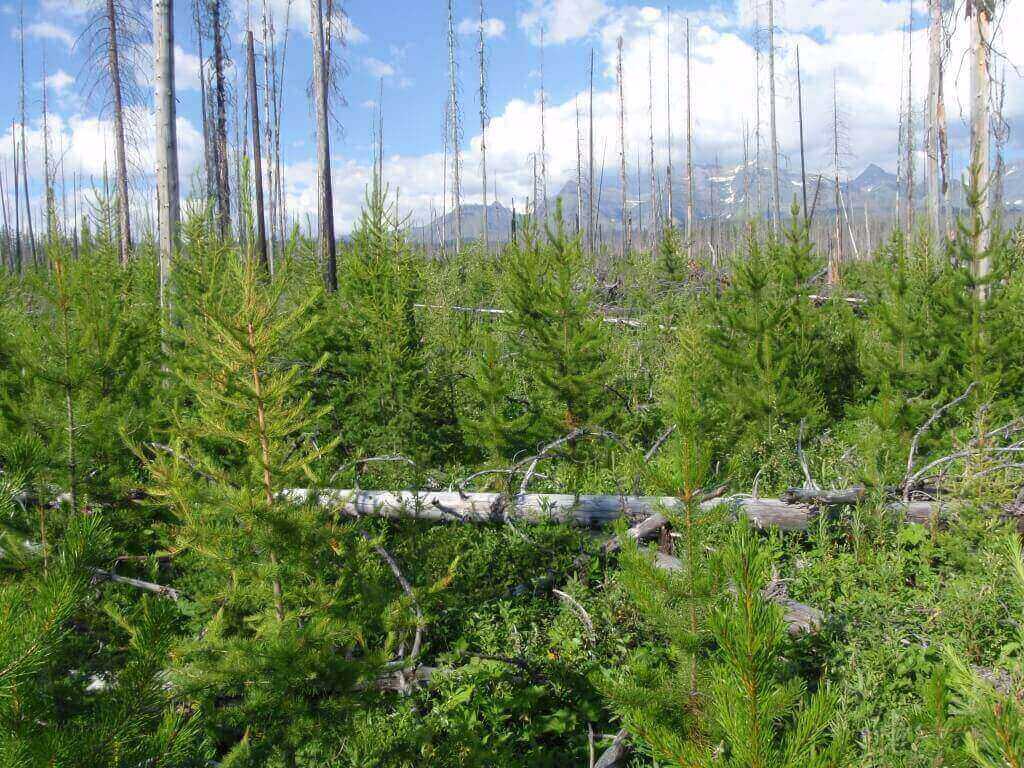 Dense post-fire tree regeneration following the Wedge Canyon Fire (Glacier National Park, 2003), which was followed by three years of cooler/wetter conditions. This photo was taken from near the edge of a stand-replacing burn patch – close to surviving seed sources. Photo courtesy of Brian Harvey

They found that overall, fewer post-fire tree seedlings established in years when fire was followed by severe drought and when seed sources were farther away, compared with cooler, wetter years and when burned areas were closer to seed sources.

Subalpine tree species, including Engelmann spruce and subalpine fir, were more negatively affected by drought after fire than species that grow at warmer, drier low elevations — Douglas-fir and quaking aspen, for instance — and those at the upper tree line, such as whitebark pine.

One exception, however, was the lodgepole pine, which was less impacted by drought or seed source distance. However, these and the other species from lower elevations have not moved quickly enough into higher-elevation burned areas to replace the more sensitive subalpine tree species.

This means that in addition to shifts in the composition of post-burned forests in the Northern Rockies, forest densities will also likely be lower in areas where fires are followed by drought, Harvey says — at least in the near and medium term.

“Fires that are followed by drought — which we are very likely going to see more of with climate change — really do set a new context in which these forests are not recovering as quickly.”

Turner hopes the findings are valuable to land managers who routinely work with wildfires, which often leave behind a mosaic of burned and unburned trees. These islands of live, unburned trees in a burnt desert may serve as valuable seed sources for forest recovery and should likely be left intact, she says.

Harvey and Turner’s larger goals are to understand the conditions under which forests can or cannot recover after fire and to anticipate what the forest landscape might look like over the next few decades or centuries.

With the study data, Turner and her collaborators will try to create models to predict future change. She is also involved in experimental efforts to understand the moisture thresholds various tree species require to germinate and become successfully rooted. She hopes to better understand forest recovery in the context of climate projections through mid-century.

“We want to tease this apart so we can anticipate what the ecosystem services (like carbon storage and wildlife habitat) will be in the future, what the landscape will look like, what it means for people’s ability to recreate and where their communities are,” she says. “There are a lot of human dimensions that come from the character and distribution of these forests.”

Daniel Donato, a former member of Turner’s lab now with the Washington Department of Natural Resources, is a co-author on the study, which was funded by the U.S. Joint Fire Science Program and the National Park Service.