At Camp Randall, a jubilant, emotional (and dry!) 2018 commencement 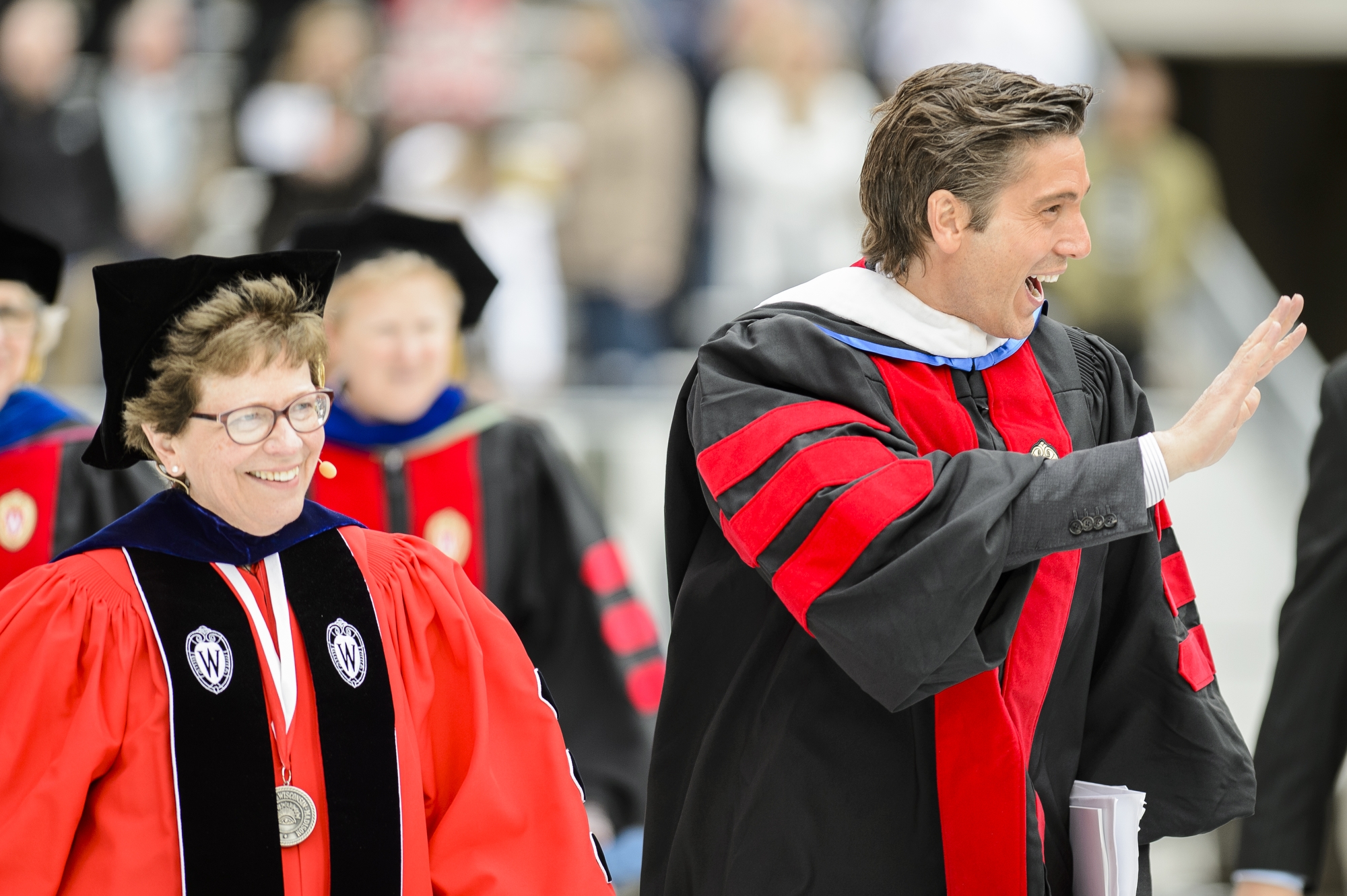 Given the soggy forecast, Maryan Mohamud feared her makeup would be streaming down her face at commencement Saturday.

The raindrops graciously held off; the tears of joy arrived as expected.

“I’m so emotional because I look back now and see how far I’ve come,” said Mohamud, a first-generation college student born in Somalia and raised in Kenya. A nursing major, she was the first among 13 siblings in her family to earn a four-year degree.

View the weekend in photos

Saturday’s total crowd, including graduates, was estimated by university officials to be 41,986.

The forecast, especially in the days leading up to the outdoor ceremony, appeared dicey. Parent Jenny Wolfe of Verona, Wisconsin, brought ponchos to wear and sleeping bags to sit on.

“We probably over-prepared,” she said. She put in a plug for Camp Randall, which began hosting the Saturday ceremony again in 2014 after more than two decades at indoor venues.

“I just love the idea of it being here,” she said. “This is such a beautiful, positive thing in our lives, I don’t care what the weather does.”

Steve and Ellen Blum of Sharon, Massachusetts, got choked up even before the ceremony started. For years, Ellen Blum said she jokingly urged her daughter, Hannah, a business major, to hold up a “Hi Mom!” sign at Badgers games in case she got on TV. She never did. Saturday, the top of Hannah’s mortarboard read: “Thanks Mom and Dad for giving me the world.” 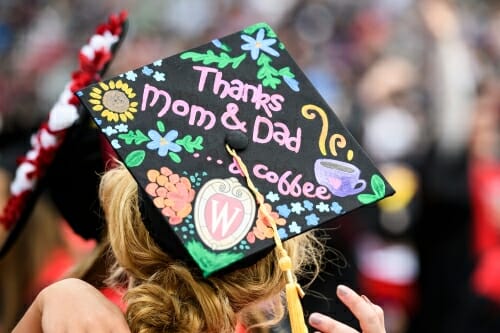 This graduate gives thanks for the three most important things. Photo: Jeff Miller

Tanja Skiljevic, who earned a bachelor’s degree in psychology, honored her parents, too. She was four when they brought her to the U.S. from Bosnia for a chance at the American Dream.

“They migrated, so I graduated,” she put atop her mortarboard. She intends to become a lawyer to help other immigrants.

Chancellor Rebecca Blank told graduates they’ve been educated in the proud tradition of the Wisconsin Idea — the commitment to public service. She urged graduates to focus on the question, “What am I doing for others?”

“If you keep asking that question, you will keep finding ways to use your knowledge and skills to make the real world a little better,” she said.

During his remarks, David Muir, anchor of “ABC World News Tonight,” emphasized two themes: our shared humanity and the need to overcome fear.

He recounted his reporting from the Syrian border, where child refugees, some of them orphaned, reached up to him, their arms out wide, craving love.

“And so I say to you today, Remember the boys and girls, those child refugees who reached up to me with their arms hoping someone would lift them up. Remember how much we truly have in common — our hopes and dreams — instead of what sets up apart.”

There will be many moments in life when the sense of fear may be overwhelming, Muir said. He shared one such moment early in his life — not wanting to go to kindergarten — as well as a later one.

“On my first night anchoring the national news, my heart was pounding louder than the words coming out of my mouth,” he said. “But I kept going. And I promise you, you will too.”

During his remarks, Muir briefly went live on Instagram with a crowd shot on his phone. The audience roared. “That’s the sound of Badgers about to change the world,” Muir said. 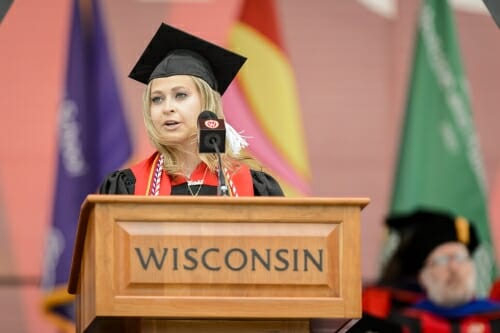 Ariela Rivkin, senior class president, spoke of the importance of “first encounters” and of stretching beyond one’s comfort zone. When she arrived on campus, she was the first Jewish person some students had ever met, she said. She, in turn, met for the first time a Native American, now a dear friend.

“If being a Badger is about the endless process of sifting and winnowing, then encountering different people with different ideas must be a part of that process,” she said.

The coveted task of introducing “Jump Around” fell to Rivkin, with Bucky leading the exuberant dance party.

Julie Gretenstein, who earned a bachelor’s degree in social work, summed it up on her mortarboard: “We came, we jumped, we graduated.”