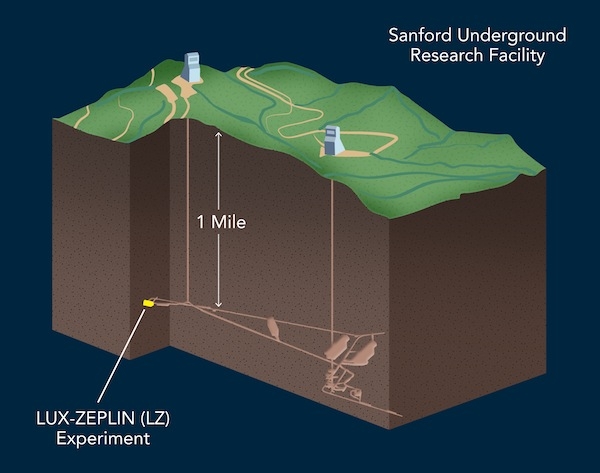 The LUX-ZEPLIN dark matter experiment will be located one mile underground at the Sanford Underground Research Facility in South Dakota, in a cavern within the former Homestake gold mine. Illustration: SLAC National Accelerator Laboratory

In an abandoned gold m­­­ine one mile beneath Lead, South Dakota, the cosmos quiets down enough to potentially hear the faint whispers of the universe’s most elusive material — dark matter.

Shielded from the deluge of cosmic rays constantly showering the Earth’s surface, and scrubbed of noisy radioactive metals and gasses, the mine, scientists think, will be the ideal setting for the most sensitive dark matter experiment to date. Known as LUX-ZEPLIN, the experiment will launch in 2020 and will listen for a rare collision between a dark matter particle with 10 tons of liquid xenon.

Ten University of Wisconsin–Madison scientists are involved in designing and testing the detector, and are part of a team of more than 200 researchers from 38 institutions in five countries working on the project. This month, the Department of Energy approved proceeding with the final stages of assembly and construction of LZ at the Sanford Underground Research Facility in South Dakota, with a total project cost of $55 million. Additional support comes from international collaborators in the United Kingdom, South Korea and Portugal, as well as the South Dakota Science and Technology Authority. The researchers’ goal is to take the experiment online as quickly as possible to compete in a global race to be the first to detect dark matter. 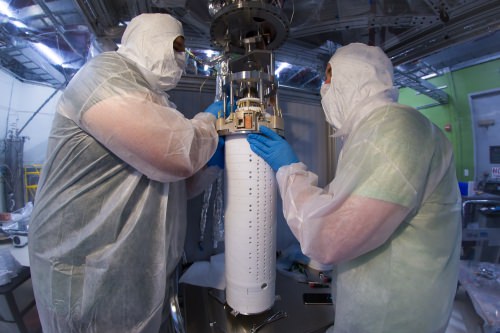 Scientists install a miniversion of the future LUX-ZEPLIN dark matter detector at a test stand. The white container is a prototype of the detector’s core. SLAC National Acceleratory Laboratory

In the 1930s, as astronomers studied the rotation of distant galaxies, they noticed that there wasn’t enough matter — stars, planets, hot gas — to hold the galaxies together through gravity. There had to be some extra mass that helped bind all the visible material together, but it was invisible, missing.

Dark matter, scientists believe, comprises that missing mass, contributing a powerful gravitational counterbalance that keeps galaxies from flying apart.  Although dark matter has so far proven to be undetectable, there may be a lot of it — about five times more than regular matter.

“Dark matter particles could be right here in the room streaming through your head, perhaps occasionally running into one of your atoms,” says Duncan Carlsmith, a professor of physics at UW–Madison.

One proposed explanation for dark matter is weakly interacting massive particles, or WIMPs, particles that usually pass undetected through normal matter but which may, on occasion, bump into it. The LZ experiment, and similar projects in Italy and China, are designed to detect — or rule out — WIMPs in the search to explain this ghostly material. 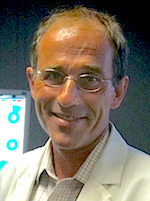 The detector is set up like an enormous bell capable of ringing in response to the lightest tap from a dark matter particle. Nestled within two outer chambers designed to detect and remove contaminating particles lies a chamber filled with 10 tons of liquid xenon. If a piece of dark matter runs into a xenon atom, the xenon will collide with its neighbors, producing a burst of ultraviolet light and releasing electrons.

Moments later, the free electrons will excite the xenon gas at the top of the chamber and release a second, brighter burst of light. More than 500 photomultiplier tubes will watch for these signals, which together can discriminate between a contaminating particle and true dark matter collisions.

Kimberly Palladino, an assistant professor of physics at UW–Madison, and graduate student Shaun Alsum were part of the research team for LUX, the predecessor to LZ, which set records searching for WIMPs. Building on their experience from the previous experiment, Palladino, Alsum, graduate student Jonathan Nikoleyczik and undergraduate researchers are conducting simulations of dark matter collisions and prototyping the particle detector to increase the sensitivity of LZ and more stringently discard signals produced by ordinary matter. 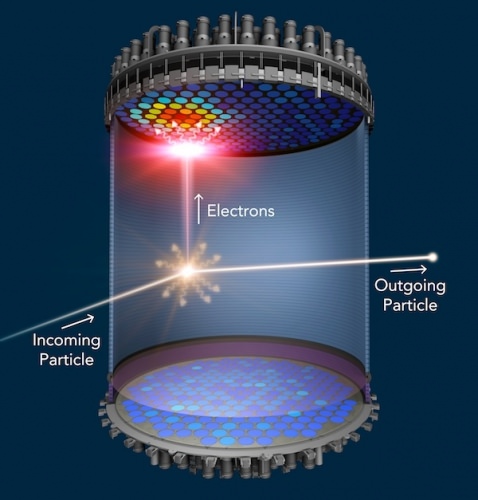 The heart of the LZ detector will be a 5-foot-tall chamber filled with 10 tons of liquid xenon. Hopes are that hypothetical dark matter particles will produce flashes of light as they traverse the detector. Illustration: SLAC National Accelerator Laboratory

The LZ project is “doing science the way you want to do science,” says Palladino, explaining how the collaboration provides the time, funding and expertise needed to address fundamental questions about the nature of the universe.

The success of LZ depends in part on excluding contaminating materials, including reactive chemicals and trace amounts of radioactive elements, from the xenon, which relies on engineering prowess provided by UW–Madison’s Physical Sciences Laboratory.  Jeff Cherwinka, chief engineer of the LZ project and a PSL mechanical engineer, is overseeing assembly of the dark matter detector in a special facility scrubbed of radioactive radon and is designing a system to continuously remove gas that leaches out of the xenon chamber lining. Together with PSL engineer Terry Benson, Cherwinka is also designing the xenon storage system to prevent any radioactive elements from leaking in during transport and installation.

“It’s one of the strengths of the university that we have the engineering and manufacturing expertise to contribute to these big-scale projects,” says Cherwinka. “It helps UW gain more stake in these projects.”

Meanwhile, Carlsmith and Sridhara Dasu, also a UW–Madison professor of physics, are designing computational systems to manage and analyze the data coming out of the detector in order to be ready to listen for dark matter collisions as soon as LZ is turned on in 2020. Once operational, LZ will quickly approach the fundamental limit of its detection capacity, the background noise of particles streaming out of the sun. 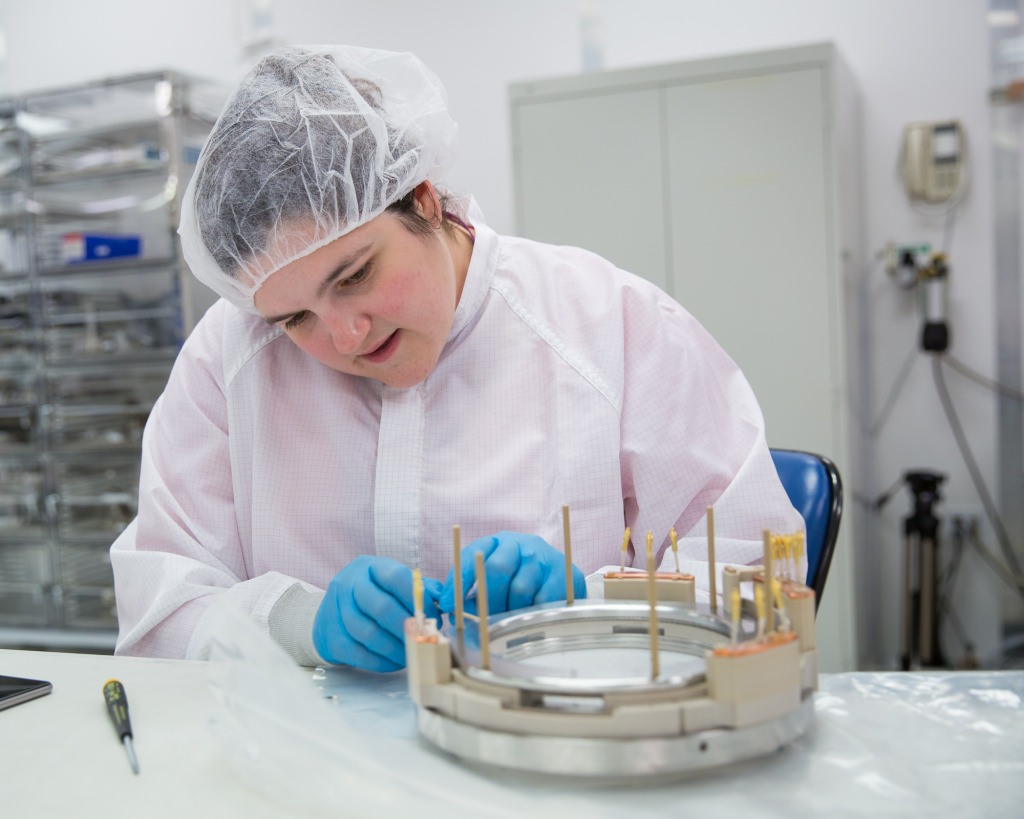 “In a year, if there are no WIMPs, or if they interact too weakly, we’ll see nothing,” says Carlsmith. The experiment is expected to operate for at least five years to confirm any initial observations and set new limits on potential interactions between WIMPs and ordinary matter.

Other experiments, including Wisconsin IceCube Particle Astrophysics Center projects IceCube, HAWC, and CTA, are searching for the signatures of dark matter annihilation events as independent and indirect methods to investigate the nature of dark matter. In addition, UW–Madison scientists are working at the Large Hadron Collider, searching for evidence that dark matter is produced during high energy particle collisions. This combination of efforts provides the best opportunity yet for uncovering more about the nature of dark matter, and with it the evolution and structure of our universe.