A chemical commonly used in consumer and agricultural products to boost the effectiveness of insecticides has been linked to a rare birth defect in mice.

The chemical, piperonyl butoxide or PBO for short, is widely used as a “synergist” in household and agricultural insecticides to make the toxic effects of the insecticide longer lasting and to reduce the amount of actual insecticide in a product.

Despite its widespread and growing use, as well as its ubiquity in the environment, the chemical has been little studied. Now, a team led by Robert Lipinski, a professor of comparative biosciences in the University of Wisconsin–Madison’s School of Veterinary Medicine, reports that PBO interferes with the critical signaling pathway dubbed by scientists as sonic hedgehog, resulting in stunted forebrain development and signature facial abnormalities. The study is published this week (Oct. 23, 2019) in the journal Environmental Health Perspectives. 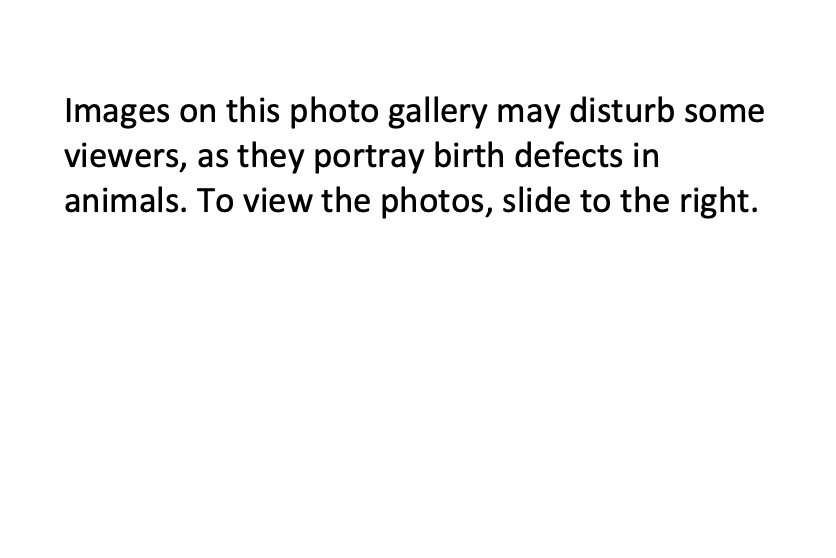 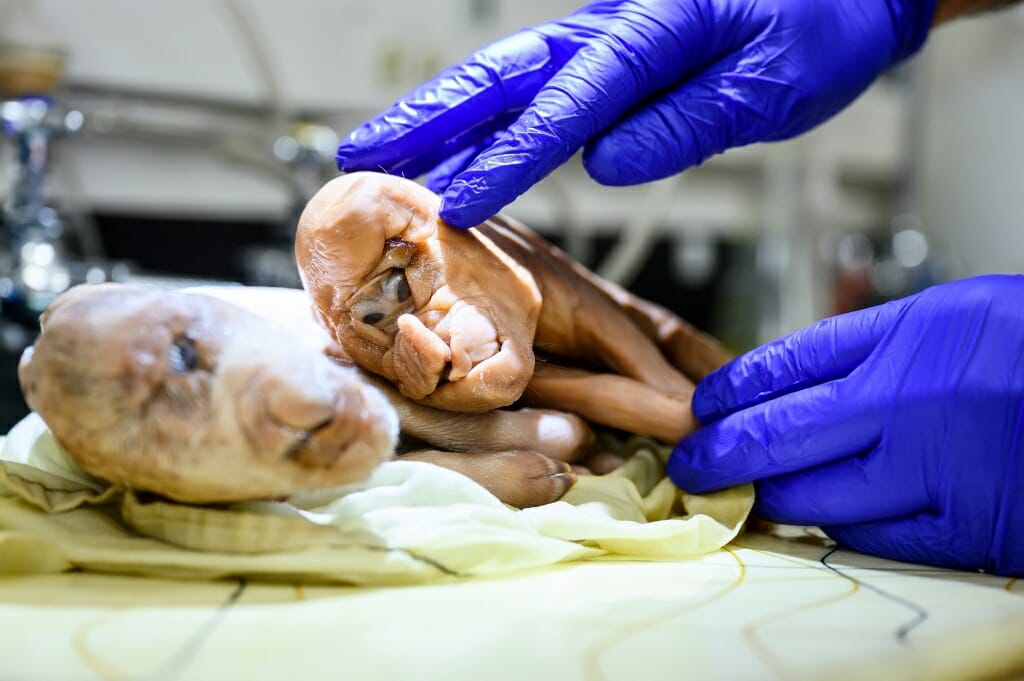 A pair of fetal pig specimens with an abnormal proboscis structure and double-globe cyclopia, both more extreme forms of a birth defect known as holoprosenchephaly. Photo by: Jeff Miller 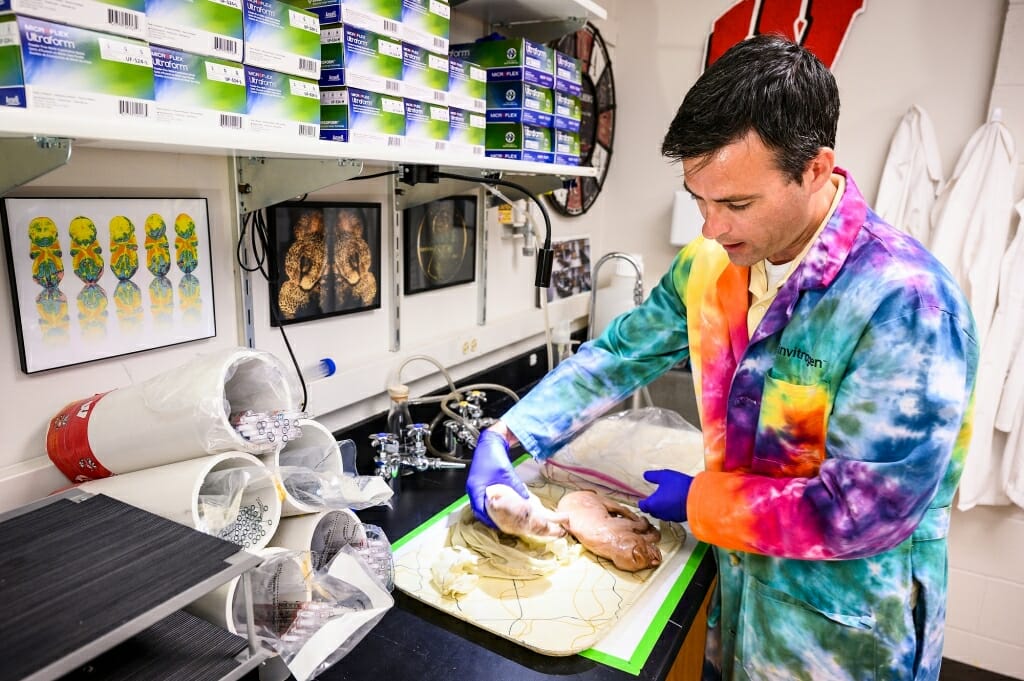 Robert Lipinski, professor of comparative biosciences in the University of Wisconsin–Madison's School of Veterinary Medicine, looks at specimens. Photo by: Jeff Miller 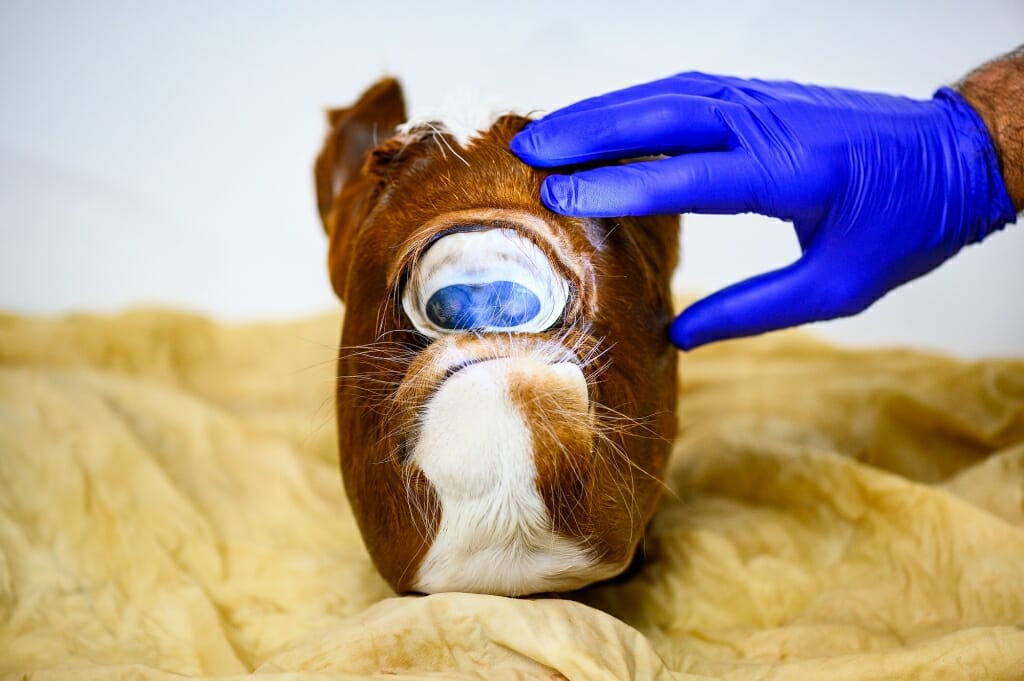 This is a specimen of a calf's head with cyclopia, the more extreme form of a birth defect known as holoprosenchephaly. Photo by: Jeff Miller

First synthesized in the 1940s, PBO was identified in 2012 as an inhibitor of the sonic hedgehog signaling pathway, a genetic pathway especially important in early development. The pathway is highly conserved, present in animals ranging from fruit flies to mice to humans.

Lipinski and his colleagues build on the discovery of PBO’s role in interfering with sonic hedgehog and show how that interference plays out in early development in mice. The signaling pathway is involved in multiple aspects of embryonic development, including the forebrain and face.

In the new study, Lipinski and his team exposed pregnant mice to PBO at a critical stage of development analogous to the period of human development when a condition known as holoprosencephaly arises.

Holoprosencephaly is exhibited in a range of developmental abnormalities, ranging from cleft lip and palate, to far more serious malformations. A dramatic manifestation of holoprosencephaly, known as cyclopia — where the median forebrain and face fail to develop, leaving a single central eye — was first linked in sheep to maternal consumption of a plant, a corn lily, that harbors the chemical cyclopamine. That chemical is also known to inhibit the sonic hedgehog developmental pathway.

“This is all about timing,” says Lipinski. “The critical period is very early in development.”

A previous study of household dust found PBO to be a common chemical contaminant, indicating the agent is ubiquitous in the environment. According to the Environmental Protection Agency, it is an ingredient in at least 1500 commercial products, including sprays and shampoos.

“It’s been said that birth defects like holoprosencephaly are caused by ‘a little bit of this and a little bit of that,'” says Lipinski, who is also the associate director of the UW–Madison Molecular and Environmental Toxicology Center. “We don’t know if PBO is contributing to birth defects in the human population, but our study suggests that more rigorous examination of PBO’s potential human health effects is warranted.”

In humans, live births with holoprosencephaly are very rare, occurring in roughly one in 10,000 newborns. However, it is believed to affect as many as one in 250 human embryos, most of which never make it to term.

PBO’s influence on human health has been the subject of relatively little scientific scrutiny, with only a handful of published studies. In humans, it can be found in “personal air samples,” and, in one study, was found in 75 percent of air samples provided by pregnant women. At present, labels of products containing PBO provide no cautionary information for exposure during pregnancy.

“Environmental PBO exposure comes from many different sources,” Lipinski says, “and human serum concentrations have not been measured. Part of our funded grant is to measure PBO concentrations in serum samples of women of childbearing age and to relate observed concentrations to those that are associated with developmental outcomes in mice.”

There is very likely a genetic component as well, says Lipinski, noting that at least 12 genes are known to be associated with holoprosencephaly, the most common being sonic hedgehog.