Twenty years after the University of Wisconsin–Madison’s James Thomson derived the first human embryonic stem cell lines (ESC), his revolutionary discovery is just beginning to emerge on the clinical landscape. To date, a handful of clinical trials of ESC-derived therapies have been completed, with approximately 16 more now underway worldwide.

From a patient’s perspective, 20 years may seem like a frustratingly long time for an important discovery to get from bench to bedside. For physicians and researchers, however, the strong desire to give hope to patients is balanced with realism about the path forward. Responsible science is almost always a slow, grueling process. But experts in the field of stem cell and regenerative medicine feel more optimistic than ever, due to a critical mass of small successes. 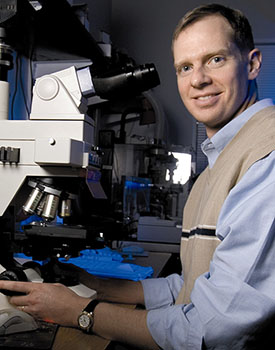 David Gamm, associate professor of ophthalmology and visual sciences. Perhaps no field of medicine has as much reason to be hopeful about stem cell therapy as ophthalmology. Photo courtesy of Waisman Center

Perhaps no field of medicine has as much reason to be hopeful about stem cell therapy as ophthalmology. Of the human trials underway, all but two involve therapies for eye disorders. David Gamm, associate professor of ophthalmology and visual sciences at the UW School of Medicine and Public Health, attributes this to three factors: practicality, safety and cost.

“Most new stem cell therapies require new surgical techniques and devices, but not always for the eye,” Gamm explains. “That reduces the cost of development and quickens the pace of getting new therapies through the FDA and into patients.”

“If the Wright brothers claimed they could build a plane that would fly across the Atlantic, they would have been laughed at,” Gamm says. “What they were really trying to do was glide off a hill safely, with the hope of greater things to come. And that’s where this field is right now.” 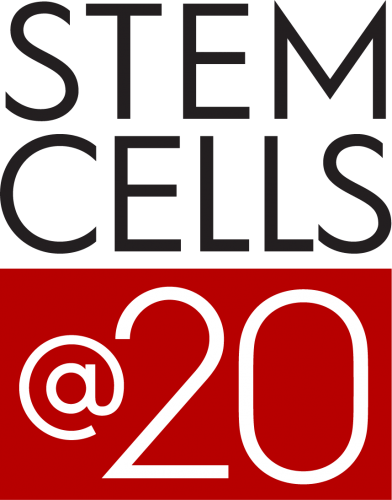 Most of the advances in the field to date have involved the development of human ESC-derived retinal pigment epithelium (RPE). The RPE is a single layer of cells that regulates the transport of nutrients and waste products to and from the retina and is considered to be the part of the eye where macular degeneration begins. In 2012, 18 adults with severe eye disease received transplants created from human embryonic stem cells and continue to have no apparent complications. Thirteen of those patients had an increase in pigmentation, suggesting that the transplanted cells were still alive. The results of the study, reported by researchers at Advanced Cell Technology in Massachusetts, provided the first evidence of the medium- to long-term safety and graft survival, and possible biological activity of pluripotent stem cells in individuals with any disease.

“If the Wright brothers claimed they could build a plane that would fly across the Atlantic, they would have been laughed at,” Gamm says. “What they were really trying to do was glide off a hill safely, with the hope of greater things to come. And that’s where this field is right now.”

Gamm says the numerous stem cell experts at UW–Madison work together, often across disparate disciplines — from cell biology to engineering to ethics.

“This is where Jamie Thomson and UW have led the way. We have a very strong sense of integrity and ethics here, and because we have this multidisciplinary approach to stem cells we also have a sense of realism,” Gamm says. “So, while we may not have flown that far yet, what we have done has allowed us to land safely. And that has allowed us to dust ourselves off, re-evaluate, climb back up that hill and try again.”

Gamm’s own company, Opsis Therapeutics, is currently working with Cellular Dynamics International, founded by Thomson and now owned by Fujifilm, toward clinical trials for retinitis pigmentosa, a group of genetic diseases that lead to blindness at an early age. Currently, there are no treatments for these debilitating diseases. 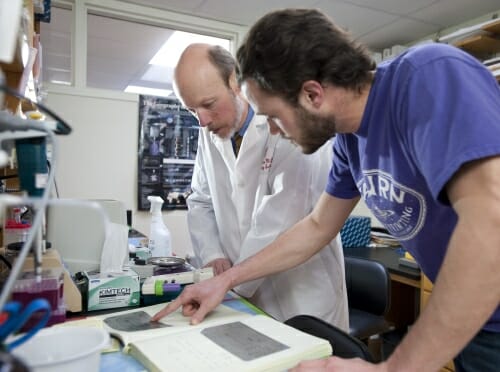 Cardiologist Tim Kamp (left), a professor of medicine and director of the UW Stem Cell and Regenerative Medicine Center, hopes his preclinical work one day will lead to treatments for patients who lose heart muscle after a heart attack. Photo: Jeff Miller

“Stem cell biology is a dynamic landscape; things are constantly evolving,” Kamp says. “With every new legitimate effort, though, it’ll get easier for the rest of us to get approval from the FDA and our therapies into patients.”

Kamp cites Geron — the first company to get a stem cell trial approved by the FDA — as an example of how each success helps accelerate progress.

“Geron’s final FDA application was more than 20,000 pages,” Kamp explains. “It took them many years and millions of dollars, but that initial process educated the FDA and provided answers to some previously unanswered questions. And that was great news for the rest of us.”

Kamp is currently conducting preclinical work with colleagues from Duke University and the University of Alabama on a patch made of contracting heart muscle derived from induced pluripotent stem cells. He and his collaborators hope one day these cells can be used to treat patients who lose heart muscle after a heart attack. Another of Kamp’s collaborators, French researcher Philippe Menasché, recently completed a phase 1 trial that transplanted embryonic stem cell-derived cardiac progenitor cells into patients with severe heart failure. That therapy seems to be safe, but it’s too early to tell how effective it was in re-muscularizing damaged parts of the heart. 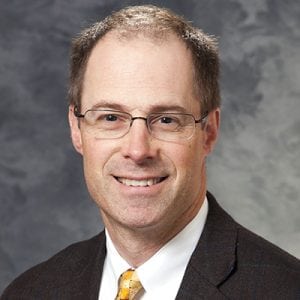 Professor of Surgery Jon Odorico hopes to have a product in clinical trials for adult patients with type 1 diabetes within the next few years.

Diabetes is another cell-based disease in the crosshairs of UW School of Medicine and Public Health researchers. Earlier this year, results of the first human trial of a stem cell-derived beta cell replacement therapy were published. Professor of Surgery Jon Odorico, who organized the conference at which the results of the trial were presented, says while the findings were not a home run, the trial helped blaze an important trail through the FDA. Conducted by the company Viacyte, the trial was the first involving stem cells and a macroencapsulation device designed to protect the transplanted cells from a patient’s immune system. A second trial is underway in the same patient population (adult patients with type 1 diabetes and hypoglycemia unawareness) and a handful of others are planned, including one through Odorico’s own company Regenerative Medical Solutions. He hopes to have a product in clinical trials within the next few years.

“There is now a critical mass of experts involved in this field and things are moving a lot faster, with more money and more industry involvement,” Odorico says. “Wisconsin has played a leading role in getting the field to this point and we are poised to take an even more prominent role, both nationally and internationally.”

As for Gamm and his patients, the conversation has begun to shift from one of resignation to one that allows for guarded optimism. He recalls a time when there wasn’t much he could offer patients, and while there are still no approved and proven stem cell therapies on the market, his message in the clinic has changed dramatically:

“It’s great to be able to tell my patients that they are not forgotten,” Gamm says. “I can finally tell them that the hope is real.”