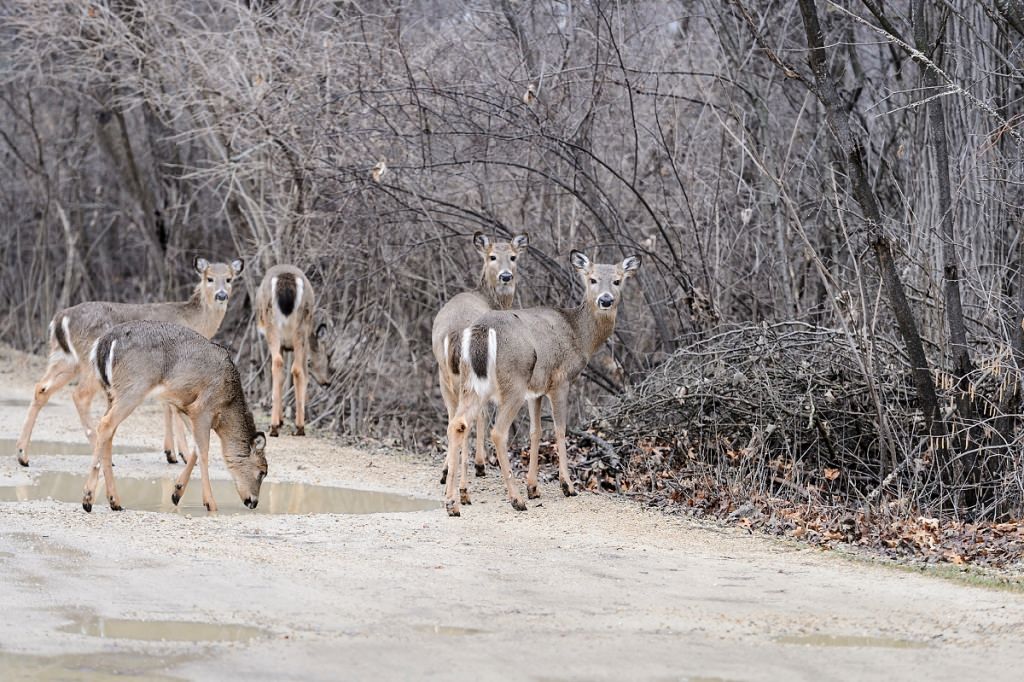 A group of grazing white-tail deer cross a trail and head into the woods at the University of Wisconsin–Madison Arboretum on Feb. 24. The signs of spring increase each month in the first part of the year. Photo: Jeff Miller

Lately, Madison residents are taking advantage of record-setting high temperatures to bike, run, and lounge outside, well before the anticipated end of the long Wisconsin winter. It’s clear that we humans are changing our behavior with the warm winter, but is the Wisconsin natural world also anticipating an early spring?

According to naturalists at the University of Wisconsin–Madison Arboretum, the answer is yes — to a degree. Our understanding of the annual rhythms of nature comes from the field of phenology (not to be confused with the discredited study of bumps on your head, phrenology), and Arboretum staff keep detailed records to note changes in these behaviors and phenomena from year to year.

Both official and unofficial observations curated by Arboretum staff suggest that the mild winter of 2017 is leading to earlier spring activity in some plants and animals.

Christy Lowney, the Arboretum’s ranger, says that the hermit thrush was sighted two full months earlier this year than in 2016, while both red-winged blackbirds and sandhill cranes were first spotted on Feb. 19th in 2017, 9 days earlier than last year. These bird migrations are noted in official Arboretum records and are corroborated by informal observations from hundreds of Arboretum visitors.

“The months of the year, from January up to June, are a geometric progression in the abundance of distractions.”

Arboretum naturalist Kathy Miner oversees the gathering of what she calls “folk phenology” records during the weekly Winter Enrichment lectures at the Arboretum. On Thursdays starting in early January, more than 150 nature enthusiasts pack the lecture hall at the Visitor’s Center to learn about beetle diversity or ancient river systems, and during intermission call out what seasonal firsts they observed in the past week. House finches singing, woolly bear caterpillars stirring, or tulips emerging from their winter bulbs — each note is written on a large poster, an informal record of the natural passage of time in the new year.

In A Sand County Almanac, former UW–Madison professor and prominent conservationist Aldo Leopold wrote: “The months of the year, from January up to June, are a geometric progression in the abundance of distractions.”

This growth in the “abundance of distractions” is demonstrated by the increasing tightness of the handwriting required to fit all the folk phenology observations on the poster at the Arboretum as the season progresses. A handful of eagle and beaver sightings in early January explodes into tightly packed insect and mammal activity, bird calls, and flower blooms by the end of February. According to these crowd-sourced notes, witch hazel is blooming, and tulips are emerging, earlier than usual.

“This is people keeping in touch with the natural rhythms where they live,” says Miner, noting that while folk phenology may not create a scientific record, it keeps people connected to their environment.

Leopold’s own phenological observations, collected during his visits to the Leopold Shack from 1936 to 1947, together with records taken by his daughter, Nina Leopold Bradley, up until 1998, created a 61-year account of seasonal behaviors at the property in Sauk County. In a paper published in the Proceedings of the National Academy of Sciences in 1999, Bradley and others showed that about one-third of bird migrations and flower blooms at the Shack were occurring earlier as the climate warmed during the 20th century. The researchers used the annual ice-melt of nearby Lake Mendota as a measure of seasonal temperature changes; the lake thawed on average seven days earlier by the end of the study period compared to the beginning.

These rigorous records are valuable because amateur observations may be influenced by factors other than the true timing of natural behaviors. For example, unseasonably warm weather gets people outdoors, where they are more likely to see things or observe certain behaviors earlier than they did in cold years when they were stuck inside.

Whether earlier spring activity is premature or advantageous depends on many competing factors. Plants emerging early may outcompete rivals — or miss out on important insect pollinators. Migrating birds could find the best nest sites if they return sooner, but if food sources are covered by a late snowfall they might starve.

So, if you’re curious whether skunks, crocuses, or cranes are as excited about spring as you are, Miner suggests getting outside and performing your own folk phenology in your backyard, on your daily walks, or on trips to the Arboretum.