Prolific biofuels researcher James Dumesic has been named the winner of the 2019 Eni Energy Transition Award.

The internationally renowned Eni Awards were established in 2007 to recognize excellence in energy and environmental research. The Energy Transition Award honors recent research and technological innovation that promote the transition toward low-carbon energy systems. Dumesic, a chemical engineering professor at the University of Wisconsin–Madison, was selected for his pioneering work on novel catalytic processes for converting plant material into advanced fuels, biodegradable plastics, and other renewable chemicals. 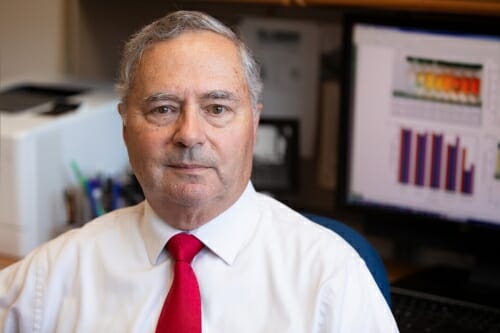 James Dumesic poses for a headshot after receiving the ENI Award for 2019, Wednesday, July 10, 2019.

“Jim combines novel chemical, catalytic, and engineering approaches in creative ways that set him apart from his peers,” says Tim Donohue, director of the Great Lakes Bioenergy Research Center and interim director of the Wisconsin Energy Institute. “His accomplishments are central to the Center’s progress in producing liquid transportation fuels and chemicals from plants. I believe his work, especially in solvent-enabled biomass processing, may serve as the core of a new, sustainable, biorefining industry.”

Dumesic, who is the Ernest Micek Distinguished Chair and Michel Boudart Professor of Chemical and Biological Engineering, has focused on creating technologies to make fuels and chemicals vital to today’s economy from plant biomass rather than from fossil fuels. His career is marked by a string of successes in devising new ways to break down biomass into chemical components that can feed high-demand industrial processes. His work at UW­–Madison has led to hundreds of academic publications, numerous patents and two spin-off companies, Virent and Glucan Biorenewables.

In early work, his research group identified energy-efficient ways to turn biomass into common products, such as a diesel fuel compatible with existing engines and a plant-based version of the ubiquitous plastic called polyethylene terephthalate, or PET.

For example, his team created an industry-ready process that can convert the plant sugar fructose into 5-hydroxymethylfurfural (HMF), a commodity chemical that can in turn be used to make a variety of chemicals, plastics and fuels.Large beverage companies, including Danone and Coca-Cola, have already invested in the production of an HMF-derived chemical to produce fully plant-derived plastic drink bottles.

In recent years, Dumesic has made numerous advances in developing a valuable industrial solvent called gamma-valerolactone, or GVL. After designing a method to make GVL from biomass, his group went on to show that GVL is useful for breaking down additional biomass, making it a renewable, reusable and inexpensive solvent for converting plant sugars into biofuels and other bioproducts.

“Word that UW–Madison’s James Dumesic has again been cited for his critical work to advance renewable energy from biomass and help society transition from less sustainable resources is fantastic news,” says UW–Madison Chancellor Rebecca Blank. “Professor Dumesic is a creative and prolific researcher and innovator. His work will help make the world better and more sustainable as we seek to capitalize on the vast but latent potential of biomass. This recognition is well deserved.”

Dumesic will receive a gold medal and a cash prize, awarded by the president of Italy, in a ceremony on Oct. 10.