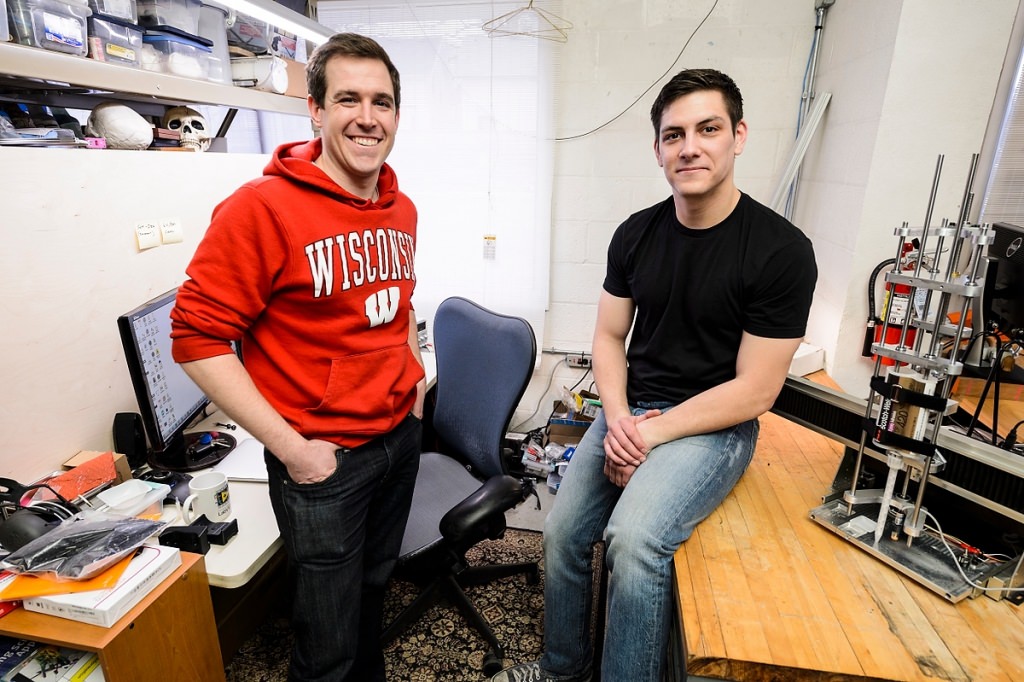 Brian Pekron, left, and Eric Ronning, CEO of Re Mixers Inc., are both 2015 engineering graduates of the University of Wisconsin–Madison. They turned their idea for a better epoxy nozzle into a business plan while participating in a Discover to Product (D2P) program at UW–Madison. Photo: Jeff Miller

An idea hatched during an engineering class at the University of Wisconsin–Madison promises to reduce waste in a common industrial mixing process. Epoxy and hardener, which must be mixed just before application, are used in a broad range of industries, including construction, manufacturing — even dentistry.

These epoxies are blended in a “static mixing” nozzle — so named because it has no moving parts, says Eric Ronning, CEO of Re Mixers Inc., which was incorporated Dec. 27, 2016.

Upwards of 70 million static mixing nozzles are sold in the United States every year because epoxy quickly sets inside the nozzle and plugs it. The nozzle technology has changed little since the 1970s, Ronning says.

Ronning had his “eureka” moment while listening to Professor Tim Osswald discuss the shortcomings of static mixers in a class on plastics at UW–Madison. 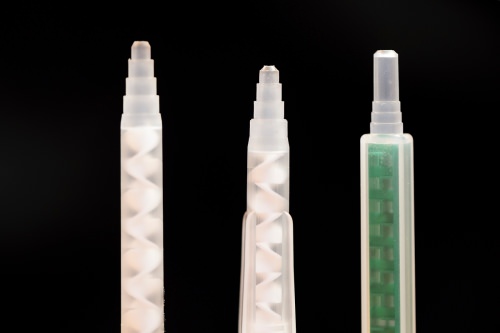 As he pondered the problem of quickly and thoroughly mixing two fluids, he realized that the problem was more interesting than it sounds. “Mixing is such a fundamental, basic action, but what is the most efficient way to do it?  With a static mixer, there are not many factors to play with, not many tricks to employ.”

Mixing, whether active or static, is something that 2-year-olds enjoy, Ronning says. “It’s a natural process. If you are standing in a river and gently release a handful of sand, you can expect all of the individual grains to be dispersed as they flow downstream. But aside from the water itself, there aren’t any moving components along the riverbed. That’s a good way to envision what happens inside a static mixing nozzle, where there also aren’t any moving components.”

Static mixing and epoxy adhesive are critical to strong, lightweight construction in laptops, cellphones, cars and bikes, Ronning says. “These products could not exist in their present form without static mixers and the adhesives they make possible.”

In the world of products, epoxy adhesive, enabled by static mixers, “is in everything we see,” Ronning says, “but it’s not where you’re looking. Your computer, your phone, your car, your house — epoxy is everywhere, but it’s behind the scenes. And every time a nozzle plugs up with epoxy, a new nozzle must be used.”

To convert a eureka moment into a business, Ronning and Brian Pekron, a fellow engineering student at UW–Madison, entered the Discovery to Product program on campus. A $65,800 grant from D2P was devoted to product development, testing of prototypes, identifying customers and forming a company. “D2P helped us realize a business strategy that was realistic, which is vital when starting any venture,” Ronning says. 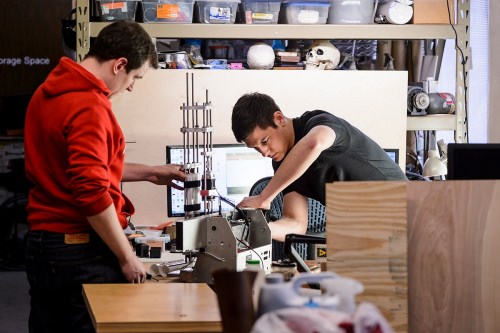 In December, Re Mixers received initial funding of $500,000 from N29 Capital Partners of Manitowish Waters, Wisconsin. “I have been really impressed with Re Mixers’ adhesive and epoxy mixing technology,” says Carl Ruedebusch, head of N29.  “Being a contractor, this is a technical area that I know well.”

The new design provides better mixing of the ingredients while dramatically reducing the amount of expensive material wasted when the epoxy hardens inside the nozzle. By improving bond strength, better mixing further cuts adhesive cost.

Re Mixers has filed a patent on the invention, which Ronning will not describe in detail at this point. However, like existing static mixers, he says it depends on a principle called the “baker’s transformation, which is a fancy way to describe how a baker kneads flour and liquid to make dough, by stretching and folding, over and over.”

Existing static mixers effectively double the mixing action with each folding; Re Mixers has figured out a fundamentally different folding action that results in a much more efficient mixing, so each fold is an order of magnitude more effective, Ronning says.

At their office at the Sector67 makerspace in Madison, Pekron and Ronning have worked to refine the revolutionary shape that Ronning envisioned back in the engineering class. They built a robotic testing apparatus to measure bond strength for different nozzle designs. The final shape increases bond strength by 5 to 20 percent over current designs, Ronning says, but the primary advantage comes from mixing efficiency, which allows a shorter nozzle to mix better than existing nozzles. As a result, less expensive epoxy is wasted when the nozzle inevitably plugs as the epoxy sets inside it.

“Our big selling point is reducing adhesive cost for the end user,” says Ronning, “and at the same time, they get a stronger adhesive.“

Ronning and Pekron hope to be on the market with their product within a year.

Beyond epoxy, Ronning says the development process could apply more broadly to the problem of industrial mixing applications. “This shape was developed by a genetic algorithm and experimentation. With each design, the algorithm looked at the performance of the bond. Then, we ran another iteration, and went through that 5,000 times. So we have developed a process that could be applied to all forms of chemical mixing.”