Can ‘smart toilets’ be the next health data wellspring?

Wearable, smart technologies are transforming the ability to monitor and improve health, but a decidedly low-tech commodity — the humble toilet — may have potential to outperform them all.

That’s the conclusion of a team of metabolism scientists at the University of Wisconsin–Madison and the Morgridge Institute for Research, who are working to put the tremendous range of metabolic health information contained in urine to work for personalized medicine.

Urine contains a virtual liquid history of an individual’s nutritional habits, exercise, medication use, sleep patterns and other lifestyle choices. Urine also contains metabolic links to more than 600 human conditions, including some of the major killers such as cancer, diabetes and kidney disease. 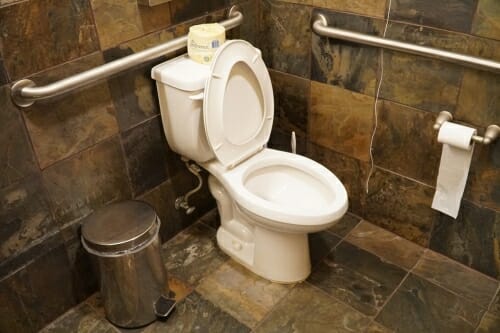 The toilet could someday outperform wearable, smart technologies in the ability to monitor and improve health. Photo: Pexels.com

The team has two essential questions. First, can frequent monitoring and testing of urine samples glean useful real-time information about an individual’s health? And second, can a technology platform be adapted to toilets that can make the collection process simple, accurate and affordable?

They received some promising answers to the first question in a small pilot study conducted this year, the results of which were published in the Nov. 11 issue of the open access Nature journal npj Digital Medicine. Two research subjects consistently collected all urine samples over a 10-day period and submitted those samples for tests with both gas chromatography and mass spectrometry for a complete readout of their metabolic signatures.

The two subjects also happen to be lead authors on the paper: the Morgridge Institute’s Joshua Coon and Ian Miller, data scientist with the Coon research group. Collectively, they provided 110 samples over the 10-day period, and also used wearable technology to track their heart rates, number of daily steps, calorie consumption and sleep patterns. 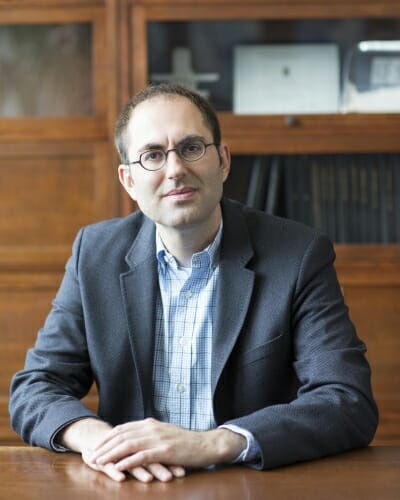 The results? The samples do indeed contain a remarkable health fingerprint that follows the ebbs and flows of daily life. For example, the subjects kept records of coffee and alcohol consumption, and the biomarkers with a known connection to both of those drinks were abundantly measured. One subject took acetaminophen, which was measured in urine by a spike in ion intensity. They were also able to measure with precision the metabolic outputs from exercise and sleep.

The next step: The research team is designing a “smart toilet” that will incorporate a portable mass spectrometer that can recognize the individual and process samples across a variety of subjects. They plan to install the toilet in their research building and expand the user group to a dozen or more subjects. Coon says the design is “a bit Rube Goldberg-like” but functional.

“We know in the lab we can make these measurements,” says Coon, a UW–Madison professor of chemistry and biomolecular chemistry. “And we’re pretty sure we can design a toilet that could sample urine. I think the real challenge is we’re going to have to invest in the engineering to make this instrument simple enough and cheap enough. That’s where this will either go far or not happen at all.”

While the pilot experiment didn’t examine health questions, the researchers say many possibilities exist. For example, testing could show how an individual metabolizes certain types of prescription drugs in ways that could be healthy or dangerous. Also, as the population ages and pursues more stay-at-home care, urine tests would indicate whether people are taking their medications properly and if those medications are having their intended effects. 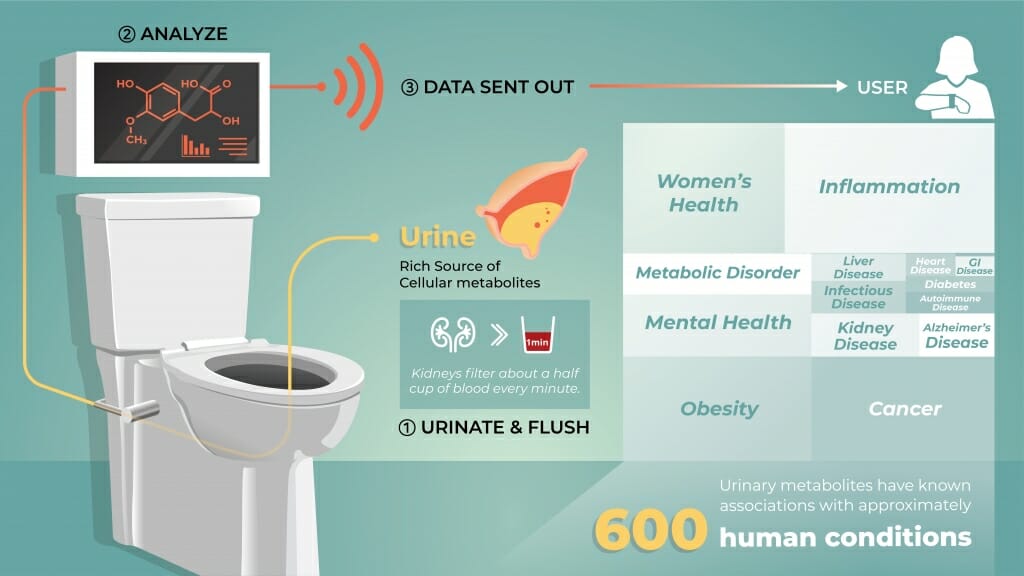 This graphic illustrates how an integrated “smart toilet” system might work as a real-time method of monitoring health. While the application may be years away, proof of principle is being developed in the lab. Dasom (Somi) Hwang,Joshua Coon Lab

Coon also believes the smart toilet concept could have major population health implications, not unlike the National Institutes of Health “All of Us” human genome database. “If you had tens of thousands of users and you could correlate that data with health and lifestyle, you could then start to have real diagnostic capabilities,” he says, adding that it might provide early warning of viral or bacterial outbreaks.

Coon, who runs the National Center for Quantitative Biology of Complex Systems, says the idea of meta-scale urine testing has intrigued him for some time. “Josh mentioned this at a group meeting one time and it was met with laughter,” Miller recalls. “I thought, you know, I kind of like the idea. I already track a lot this stuff in my everyday life.”

Adds Coon: “So we went out and bought a couple coolers and started collecting.”

While the mass spectrometer small molecule analyses are being done on $300,000 machines, Coon says portable mass spectrometer technologies exist at a tenth of that cost. He says that with a market this massive, they could eventually hit a reasonable cost threshold.

“Almost every automobile on the road is more complicated than that portable mass spectrometer,” he says.