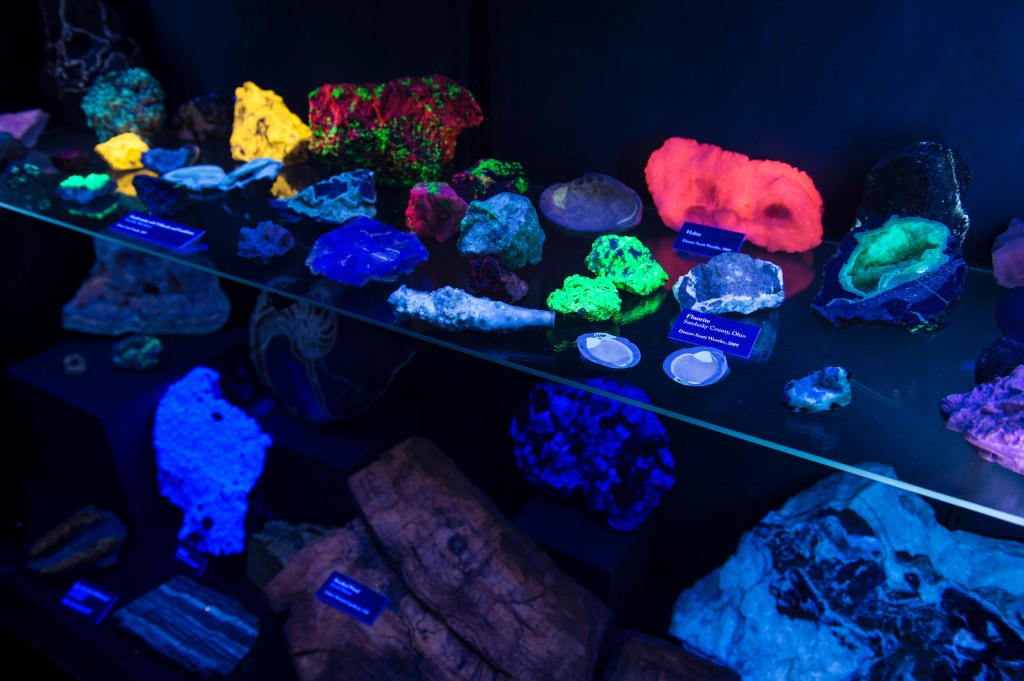 The fluorescence of certain minerals are visible when viewed under a mix of short- and long-wave “black light” sources in the rocks and minerals room at the Geology Museum. A new initiative will centralize the databases of this and the university’s four other natural history museums. Photo: Jeff Miller

In 1849, the Board of Regents of the new University of Wisconsin directed the curation of the state’s plants, animals and minerals in a “cabinet of natural history.”

Now, that founding piece of scientific inquiry is re-forming — digitally.

A new UW2020 initiative will centralize the databases of the university’s five natural history museums, which have separated over the decades to specialize and accommodate growing collections. The 1.3-million-specimen Wisconsin State Herbarium will coordinate with the zoology, geology, entomology and anthropology museums to merge records in a way that allows researchers to study the full scope of natural artifacts in one central location. This digital cabinet of natural history will link the museums’ combined 9 million-plus specimens that span all seven continents, the moon and Mars. 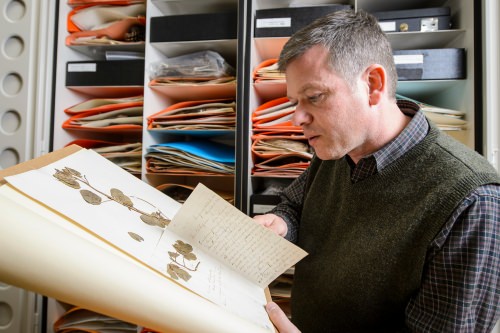 Ken Cameron, director of the Wisconsin State Herbarium and professor of botany, inspects a plant specimen collected by a Civil War colonel during a battle near Atlanta in 1864. Photo: Bryce Richter

“We’re coming back together, not in a physical way, in a common building, but through a virtual platform,” says Ken Cameron, the director of the herbarium and the lead scientist of the project. The curators hope the project will be up and running and available online in about a year. “One hundred sixty-some years later, the cabinet, the museum of natural history, is re-forming, but in this new 21st century online way.”

The new database would allow a researcher to query specimens from each collection at once. For example, they could look up a time and place in Wisconsin and uncover the plants and animals that resided there and then, which minerals or fossils have been found there, and whether any human-made artifacts have been recovered at the site. With some specimens intact back to the founding of the cabinet, the century and a half of records provides a boon to scientists trying to track how populations have shifted over time. 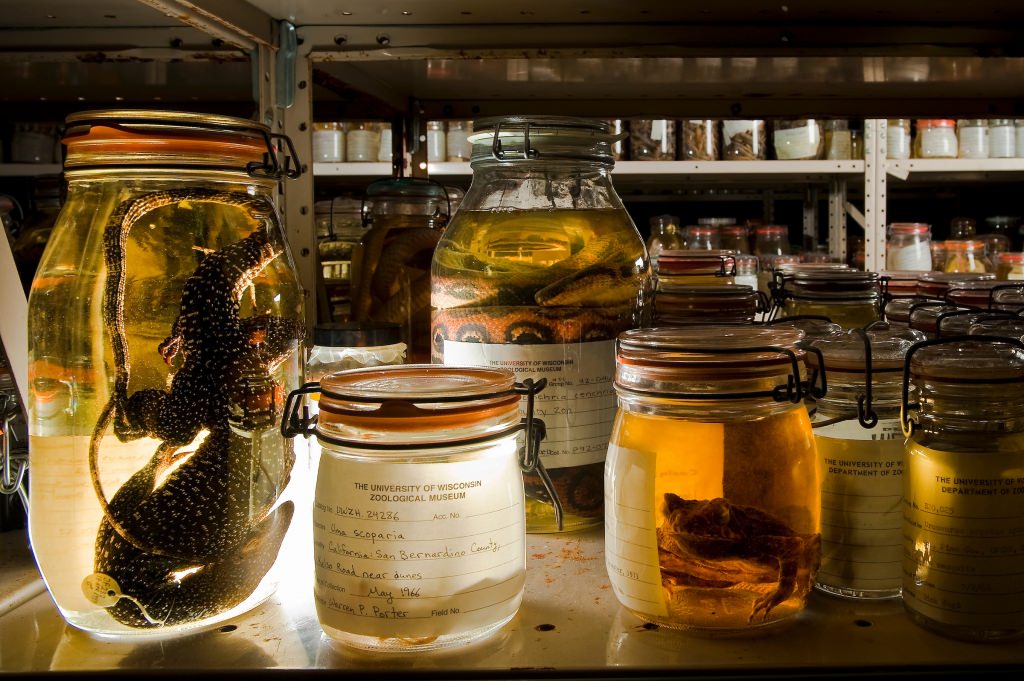 A variety of biological specimens stored in the Zoological Museum. Photo by: Bryce Richter 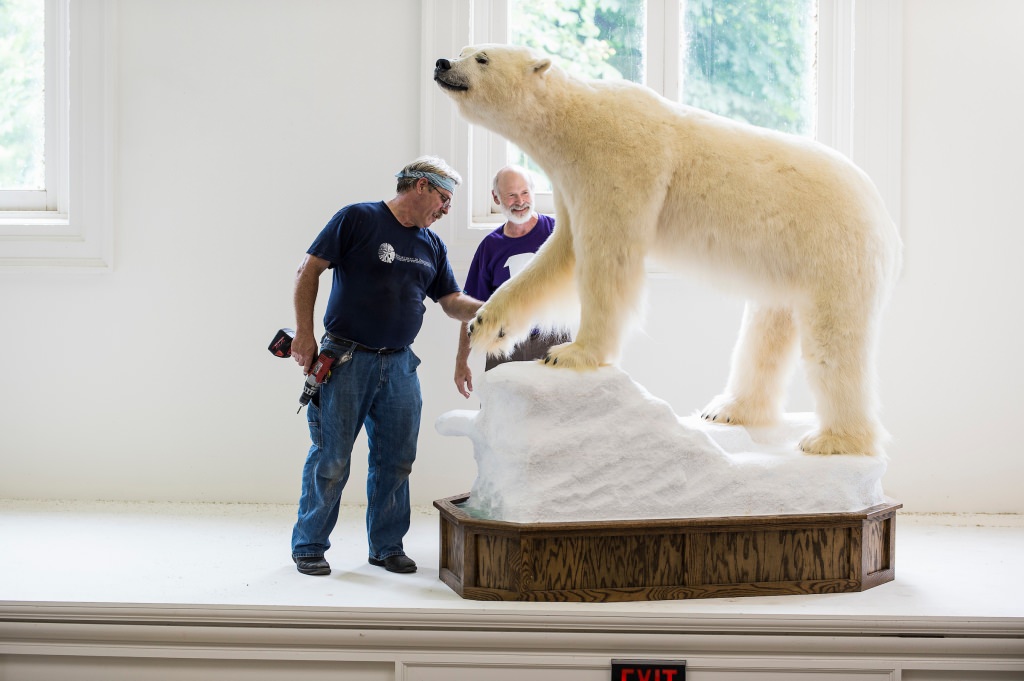 Facilities managers position a 12-foot-tall stuffed polar bear in Birge Hall in 2015. The specimen, legally hunted by a private citizen many years ago, was donated to the Zoological Museum's collection after being bequeathed to the UW Foundation. Photo by: Jeff Miller 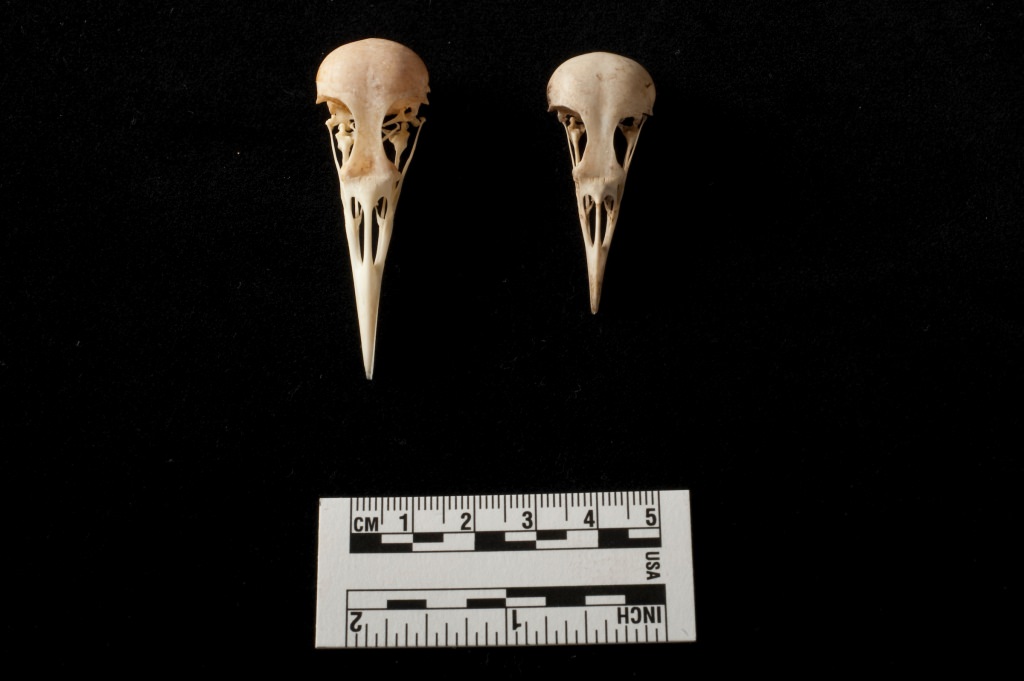 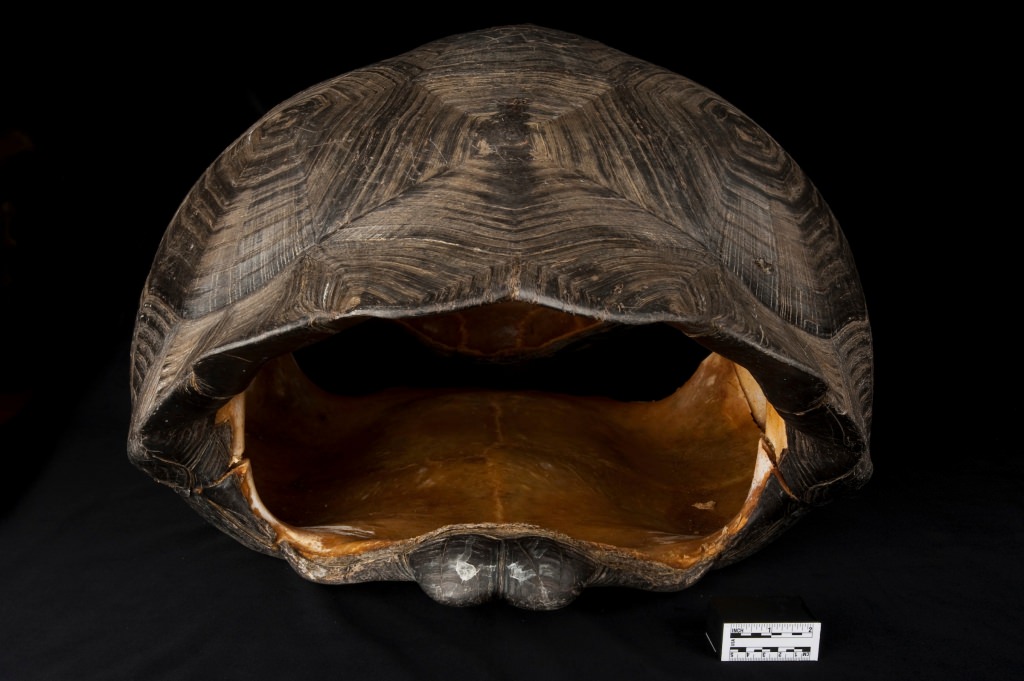 The shell of a Galápagos tortoise, complete with dark lamina, the hard exterior overlay of the skeletal shell, is housed in the collection of the Zoological Museum. Photo by: Bryce Richter

Each contributing museum curates and digitizes its collections in unique ways, while facing its own challenges. Nearly microscopic insect larvae from entomology are just as hard — only in different ways — to document and catalog as massive rock or fossil samples from geology. Jars of fish and boxes of bones are difficult for zoology to image, while anthropology struggles without a universal system of terms for different items.

Many of the museums capture images of as many specimens as possible to give even remote researchers a chance to inspect the samples up close. These pictures can help scientists verify that the specimen is labeled correctly while documenting variation across a species. 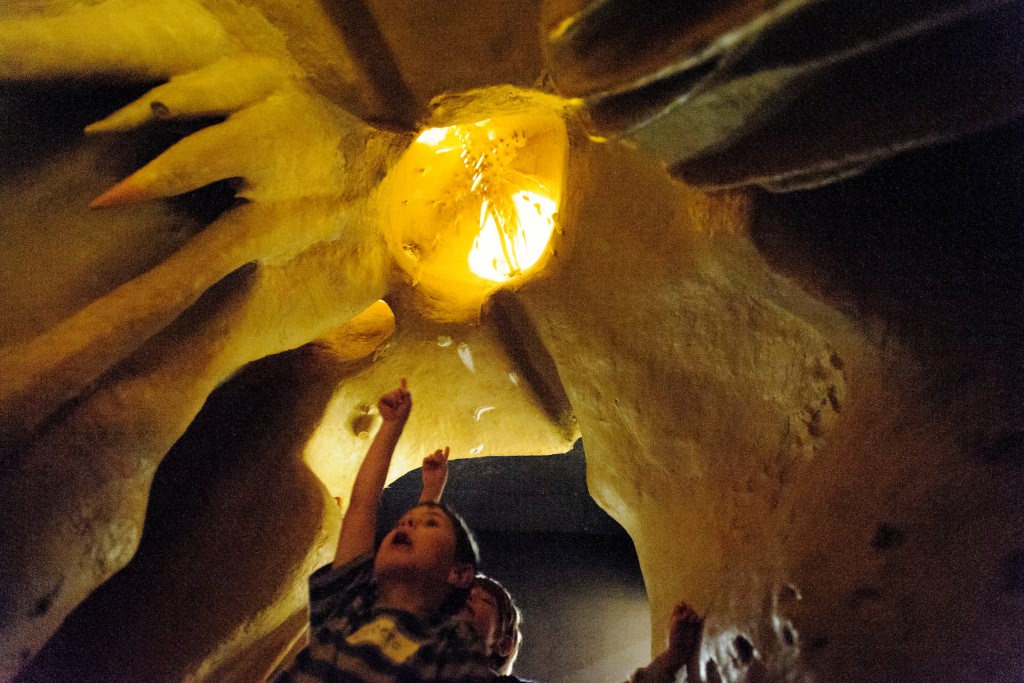 Visiting first-grade students look up at a replica of stalactites as they walk through a cave display at the Geology Museum in December 2013. Photo by: Jeff Miller 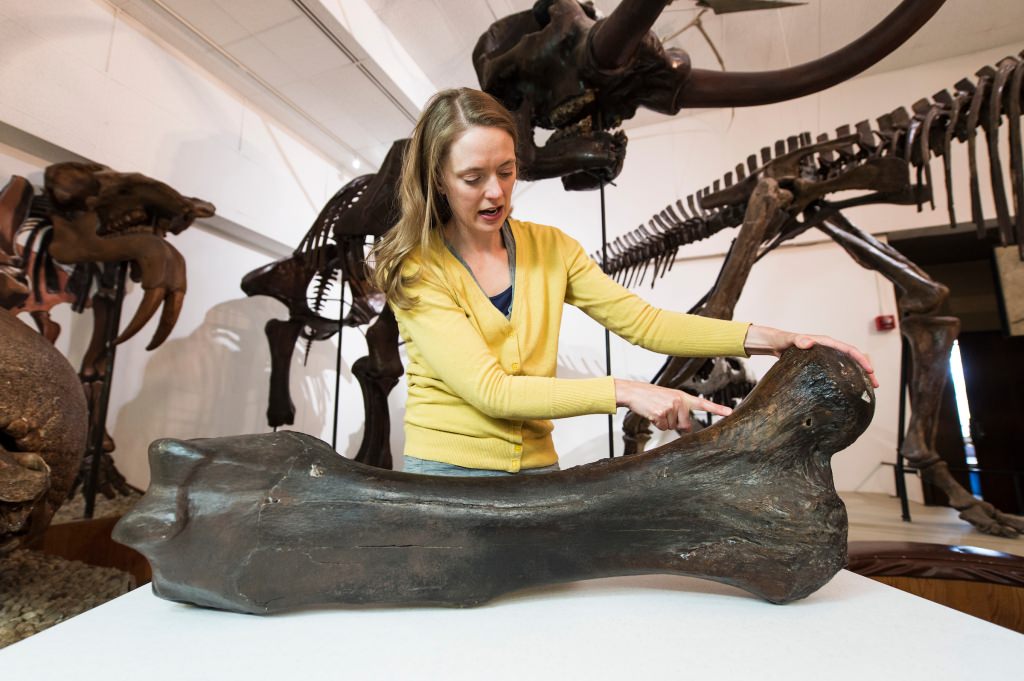 Carrie Eaton, curator of collections at the Geology Museum, stands with the femur of what was formerly known as the Boaz Mastodon in 2015. Photo by: Jeff Miller 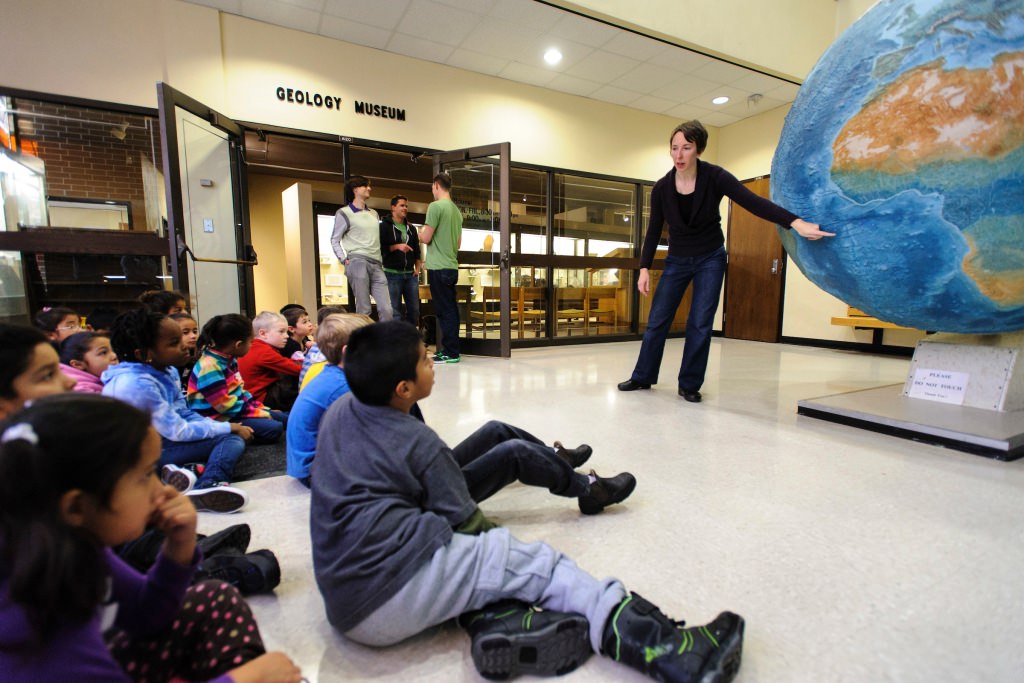 Standing next to a giant globe, Brooke Norsted, assistant director of the Geology Museum, talks with 1st grade students in December 2013. Photo by: Jeff Miller

In the eastern wing of Birge Hall, herbarium curators fit pressed plant sheets into a dedicated lightbox chamber, capture an image and copy details of the specimen to the digital entry. A similar lightbox, only much larger, allows Carrie Eaton, the curator of the Geology Museum, to photograph rock samples, with their shimmering colors true-to-life to aid identification. Eaton relies on a mobile photography studio for the many specimens far too heavy to move.

The boxes of pinned insects lining the drawers of the Wisconsin Insect Research Collection call for a different approach. In the back room of the entomology collection on the third floor of Russell Laboratories, director Dan Young and curator Craig Brabant manage a robotic camera that can image an entire drawer of hundreds, if not thousands, of individual insects in just five minutes. Tiny labels full of vital information still require a lot of time and labor to digitize. Some samples, like larvae preserved in jars, must be imaged in more labor intensive ways. 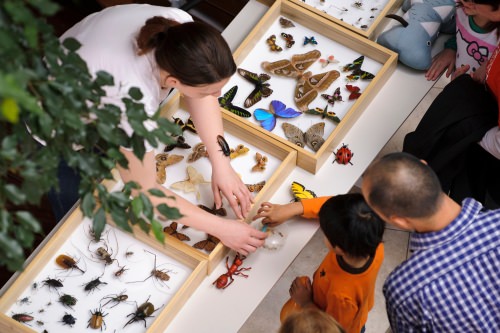 Children learn about creeping, crawling and flying bugs at a hands-on exploration station organized by the Department of Entomology’s Insect Ambassadors at the Discovery Building in April 2011. Photo: Jeff Miller

But curation is not all about pictures. The most important information is typically the date and location where a specimen was collected.

“If we don’t know where an item came from, we lose much of its research potential,” explains Elizabeth Leith, the curator of the anthropology collection. The same could be said for all of the natural history museums.

Leith is the only one overseeing the million-or-so anthropological specimens in the Sewell Social Sciences Building. The collection had no permanent staff until 2007. Unlike the curators of the biological collections, Leith cannot rely on species names to organize the anthropology specimens. Instead, artifacts are typically grouped by the site where they originated.

Whether it is boxes of bones or a fully articulated skeleton, the Zoological Museum in Noland Hall has trouble imaging most of its specimens in a way that would be useful to researchers, says curator of collections Laura Monahan. But if they can document when and where each species was collected, researchers can match that with information about other animals or specimens from other museums. 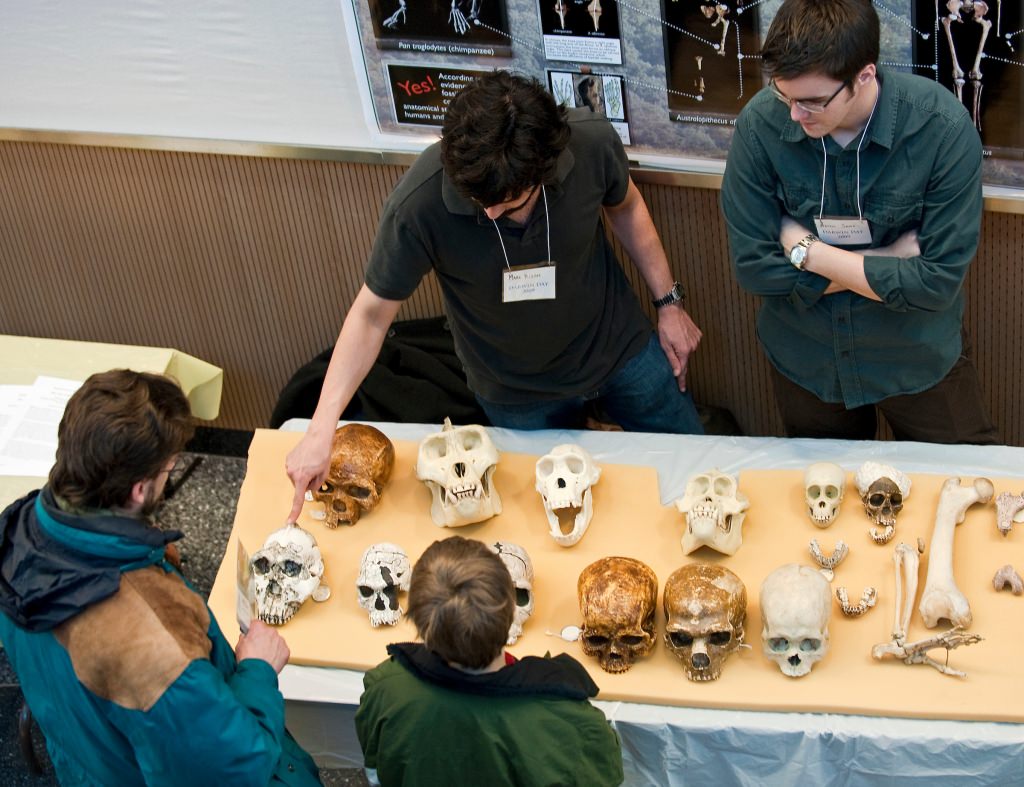 Two anthropology graduate students point out the distinguishing characteristics of a group of skulls on display during Darwin Day in February 2009. Photo by: Bryce Richter 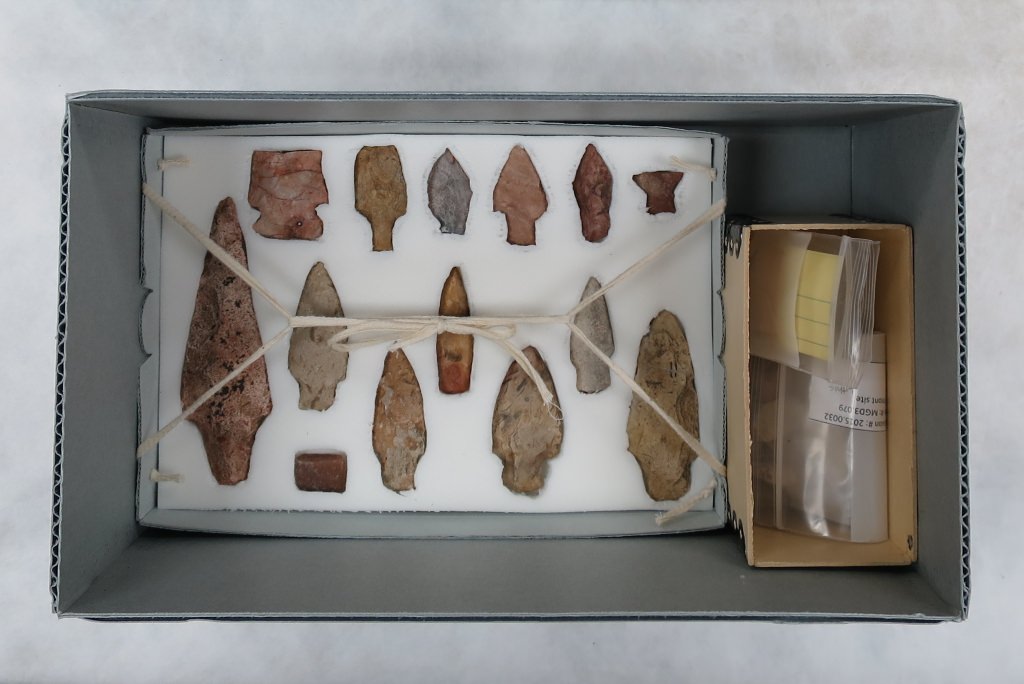 A sample of points in the anthropology collection in the Sewell Social Sciences Building that were recovered from the Tilmont site, located in Crawford County, Wisconsin. Elizabeth Leith/UW-Madison

Coordinating the different collections gives scientists a sense of “what that place was like at that time” in a way that a single museum cannot, says Monahan.

Because each museum is always collecting, paring down backlogs and keeping up with new specimens is a constant struggle. And just as a collection begins to familiarize itself with the latest database systems — which are rarely built to accommodate the demands of large and varied collections such as these — the technology changes. The institutional knowledge of the directors, curators and staff about their respective collections keeps the museums humming along as they steadily catalog and database their specimens.

The UW2020 initiative will fund database managers and additional student and staff support to develop links between the collections.

“This central database isn’t a complete answer for natural history research,” says Cameron. “But it gives scientists the opportunity to know to ask for further information.”