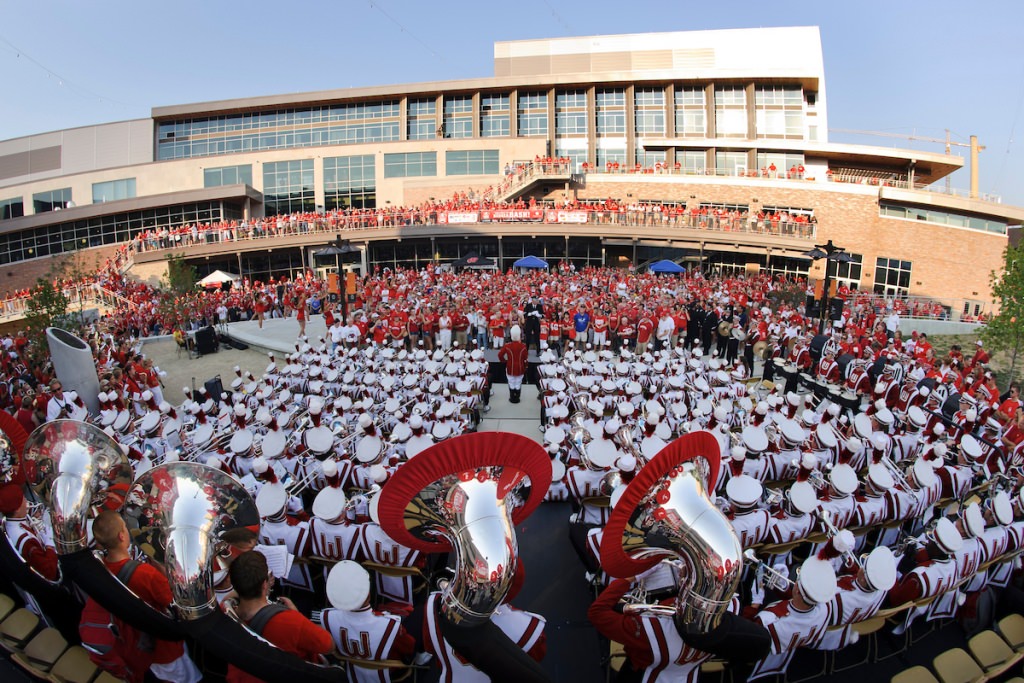 The UW marching band performs for Badger fans by Union South during the Badger Bash on Sept. 1, 2011. Photo: Jeff Miller

Badger pride is about to go national.

The UW–Madison campus and its football tailgating traditions will be showcased Friday and Saturday, Sept. 29 and 30, during two mornings of live broadcasts on Headline News (HLN).

The cable network’s morning show will report live from Memorial Union Terrace on Friday from 7 a.m. to 10 a.m. CST, and from Union South on Saturday from 6 a.m. to 10 a.m. CST. The Badgers play the Northwestern Wildcats at Camp Randall Saturday.

Students and community members are encouraged to turn out on both days to provide an enthusiastic backdrop for the live broadcasts.

“As Badgers we take a lot of pride in our accomplishments and in our campus,” says Iffat Bhuiyan, a senior from Madison and president of the Wisconsin Union. “It would be really exciting to see our student body on national television.”

The show’s presence on campus is part of a series of stops by the network at college campuses across the country highlighting football tailgating. Coy Wire, a sports anchor for CNN and HLN, will report live from Madison as part of “Morning Express with Robin Meade” on Friday and “Weekend Express with Lynn Smith” on Saturday.

On Saturday, the show will feature the pep-rally excitement of the Badger Bash Tailgate Party, held at Union South prior to all home games. The free tailgate party begins at 8:30 a.m. Kickoff follows at 11 a.m.

A film crew is scheduled to arrive on campus Wednesday to tape segments that will air on Friday and Saturday. Wire, for example, is expected to try kayaking on Lake Mendota with Outdoor UW on Thursday. Other taped segments will feature State Street Brats, the Tornado Room and Fromagination, a cheese specialty shop.

Nicole Rosenbaum, a junior majoring in art education, will be spotlighted on Friday as she creates a painting especially for the show in real time that morning. Her segments will feature Wheelhouse Studios, a drop-in arts studio in Memorial Union that provides an outlet for creativity in the heart of campus.

Bucky, too, is preparing for his closeup. He’s expected to get airtime both days.