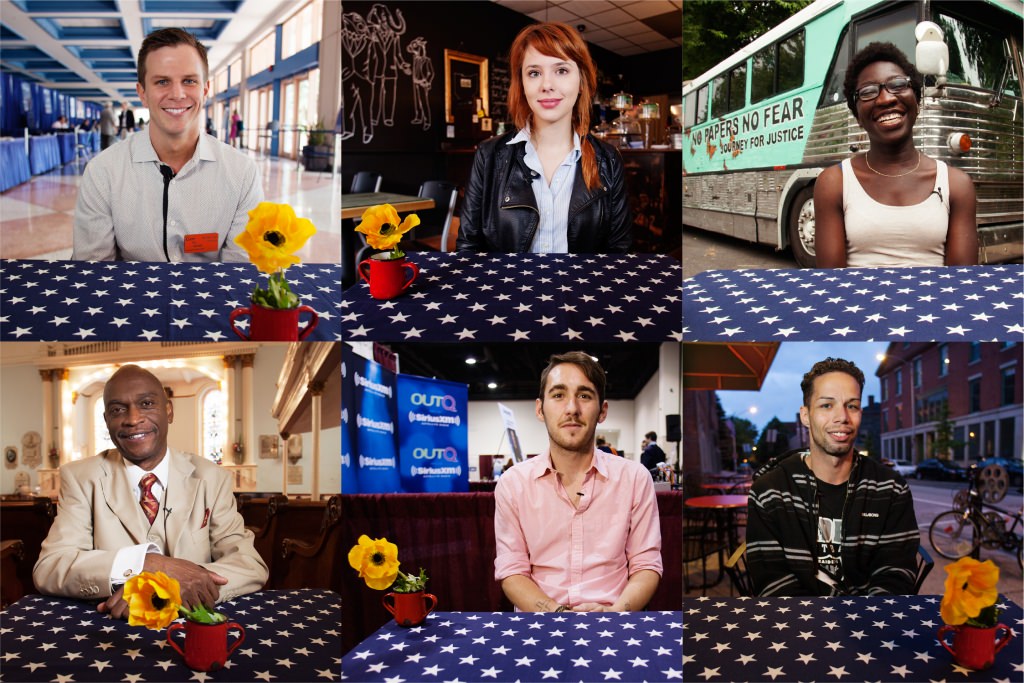 Julie Winokur’s film “Bring It To The Table” aggregates hundreds of interviews with voters of all types from every corner of America. Courtesy of Bring It to the Table

For many Americans, politics is one of few topics we refuse to discuss. Julie Winokur is trying to change that.

Winokur had an existential moment after her son called her “intolerant” of other people’s political views. She decided to create a film and national movement to understand why people believe what they believe.

Her film “Bring It to the Table” aggregates hundreds of interviews with voters of all types from every corner of America with the hope of reintroducing civility into our political discourse.

Winokur and her team are in the middle of a campus speaking tour; UW–Madison is the next stop. Her film will be screened at 6 p.m. Thursday, Oct. 6, in the Education Building, accompanied by a live “Table Talk” discussion forum. The event is free and open to the public. 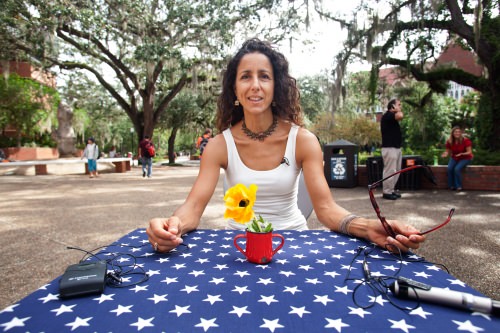 Filmmaker Julie Winokur wanted to create a film and national movement to understand why people believe what they believe. Courtesy of Bring It to the Table

A former journalist, she has been traveling from campus to campus inspiring students to listen and learn from one another, despite their sharp differences of opinion. She spoke this week about her upcoming visit and more.

Q: First of all, how’s the tour been going so far?

A: It has been fantastic, fantastic. You know, it’s exciting because I get to go all over the country. I was just last week at Texas Christian University and before that at the University of Pennsylvania, kind of doing the gamut from community colleges to Ivy League schools. So, I get this pretty fascinating bird’s-eye view into a huge bandwidth of your generation.

Q: What sort of things have you been hearing? What kind of common ground or conflicting messages have come up?

A: I think, universally, people are feeling frustrated and confused — also, feeling a little lost about what do you do with such a heated election cycle where nobody seems satisfied? I think the universal question for people is, what is true anymore? A lot of the ethos of “Bring It to the Table” is that we need to not make this so much about politicians, we need to make it about issues. Also, it’s not just a circus that happens every four years during the presidential election. It’s about trying to shift people’s outlook on this and making sure that young people aren’t completely discouraged from participating. I hear a lot of young people who just want to sit out the election; it’s a disappointing election to be a first-time voter. A lot of what I’m hoping is to encourage young people not to despair, it’s in your hands to take ownership of what it means to be a citizen and what it means to get engaged and to encourage a more meaningful political discourse, not the nonsense that we’re witnessing.

Q: What kind of value does an event like this have?

A: The biggest value is learning how to have those difficult conversations because I don’t think anybody is really teaching us how to self-examine and how to listen to people we don’t agree with. It sounds so ridiculously simple, but it’s kind of like a light goes on in the room when people stop and they think about it — they’re like, “You know, you’re right.” I actually don’t usually go into these conversations with the intent of learning from someone else, so much as proving to them what I believe. So it’s a whole different approach of opening up the door for constructive conversation. If we don’t have (these conversations), what we see is the system breaking. And frankly, I think that’s what we have right now: a broken system. So, the takeaway is: It’s a two-hour presentation and they walk away with a set of tools to be able to deploy in their lives. You know this is practical stuff, this isn’t a heady intellectual exercise. Do you want to be part of the problem? Or part of the solution?

Q: The discourse really has gotten venomous and personal. A lot of polling data shows how much Americans vote based on a candidate’s personal traits. In the same way, we sometimes make personal judgments about family and friends based on what they believe. How have you navigated that?

A: You can disagree without being disagreeable. We have made disagreement almost a personal assault. There’s this assumption that if you disagree, that there’s a personal attack underway. That’s certainly how the media has spun it and how we’ve let debates be run. There’s this notion that we should be able to have healthy disagreement. I think that there’s something going on in the country, too. When you think somebody veers (away from) the view you do (politically), it almost makes your skin crawl a little bit. It has become visceral and so far removed from practical application.

Q: I really liked the last line of the trailer: If we can agree that we all want what’s best for the country then we can discuss the best way to achieve it. But right now, the visions are so different. Where do we go from there?

A: Right, and right now we can’t even agree that an orange is an orange … it’s bizarre. It’s very easy to dismiss so-called facts and we do it in both directions. Liberals like to think that they’re dealing with the real facts and that conservatives are twisting or ignoring facts. What that does is, if Fox News presents an actual fact, liberals instantly discredit it and doubt its legitimacy. Facts can be very subjective, and yet how do you know which ones are and which ones aren’t? Take Donald Trump’s tax returns — he was allegedly given a billion-dollar tax break. Some people look at that and say this feels like a crime against the middle-class …, and some people like Rudy Giuliani can look at the same fact and praise him as (a) genius. So you can take the same set of facts and come to entirely polar opposite conclusions.