Doubts about their ability to become pregnant affect as many as 25 percent of American women, and solving that problem is the basic business plan for BluDiagnostics. Although the startup company was born in the University of Wisconsin–Madison Biochemistry Department, co-founder Katie Brenner says the idea came directly from her own difficulty with conception.

Like many would-be parents, Brenner was advised to select the optimum time for conception based on blood and/or urine tests of hormone levels, but the tests are cumbersome at best and inaccurate at worst, she says.

Working in the lab of BluDiagnostics co-founder Doug Weibel, an associate professor of biochemistry at UW–Madison, Brenner developed a quick, saliva-based method for measuring progesterone and estrogen. Variations in estrogen levels, in particular, are closely related to ovulation, and are considered the gold standard for conception timing, she says. 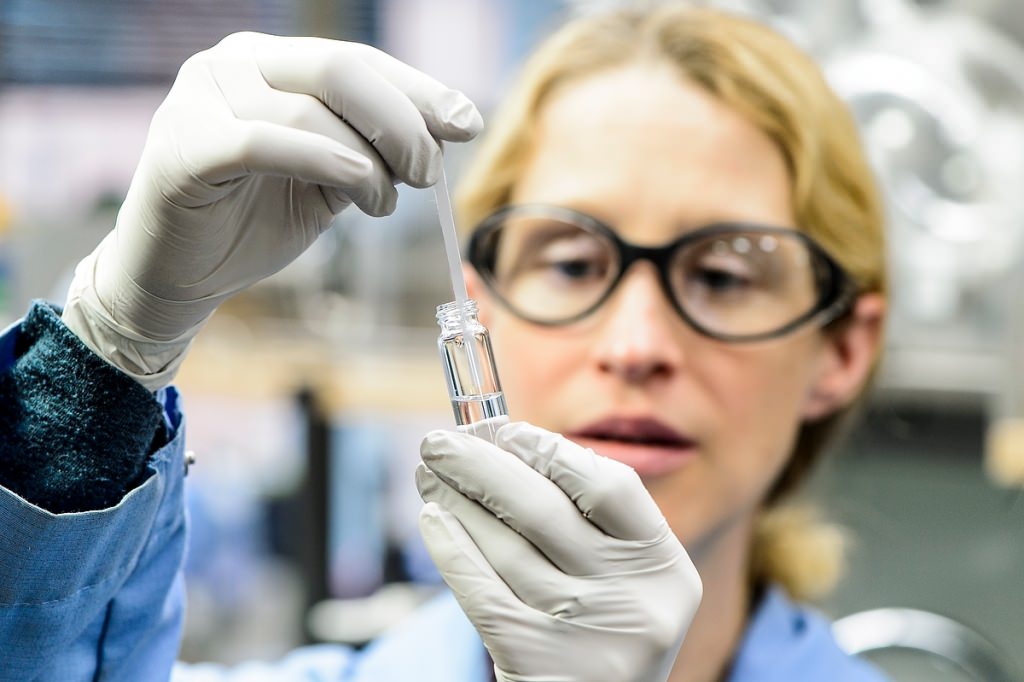 Katie Brenner is pictured in the DeLuca Biochemistry Building with a prototype testing strip designed to detect estradiol and progesterone hormones in a woman’s saliva, which can be used in conjunction with an app on a mobile device to measure fertility. Photo: Bryce Richter

“We looked at how many women struggle to become pregnant, and they don’t know if it’s something about their body, their partner’s body, or just poor timing,” she says. “It’s hard to find information at a time when you want a lot of information and control.”

Brenner came to Weibel’s lab in 2012, after getting a doctorate from the California Institute of Technology and spending several years full-time with her kids. As she worked on infant nutrition with Weibel, she was also thinking about fertility.

“Women need daily information on hormone levels,” she notes, adding that such information could be available from a daily blood test. “But nobody wants to take a blood test every day, so we developed one using saliva instead. Being a bioengineer in a biochemistry department, I realized it was just a matter of developing the technology.” 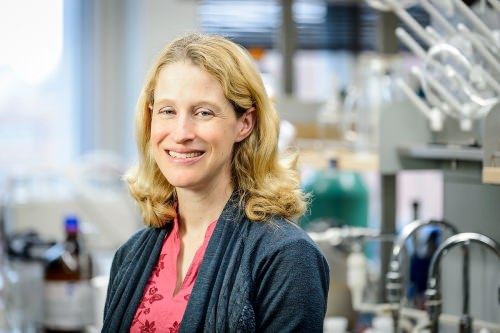 Users wet a paper strip with saliva and within minutes the device holding the paper will deliver measurements of progesterone and estrogen to the patient’s smart device.

“The readings are compared to your previous levels so you see the overall trend,” Brenner says. “That tells you what your body is doing and helps you understand your fertility.”

Things have moved quickly since Brenner came up with the basic, patent pending innovation about two years ago. One key step was the 2014 Wisconsin Entrepreneurial Bootcamp. “It was a one-week crash course in getting a business started.”

“Katie is a great example of those gifted scientists we hope to inspire and educate as part of the bootcamp,” says director Dan Olszewski, director of the Weinert Center for Entrepreneurship at the Wisconsin School of Business. “Her ability to take her cutting-edge research from the lab to a product that will have such a positive impact on so many is truly impressive and a great example of the Wisconsin Idea.”

“Having the lab, sharing this vision with Doug Weibel, my lab leader, and having great support from our department have all been key.”

With assistance from the third co-founder, Jodi Schroll, BluDiagnostics won the 2015 Governor’s Business Plan Competition, held last June. “To write a business plan required understanding our market and establishing a pricing structure, which I had not been trained to do as a scientist and engineer,” Brenner says. “It was incredibly encouraging to see that other people thought this technology would fill a big need. It took me a long time to believe in the idea, since it was so personally motivated.”

Winning the competition led to investments that have totaled about $1.2 million, she says.

Meanwhile, Brenner continues to study the nutritional needs of premature babies in Weibel’s lab, in collaboration with De-Ann Pillers, a UW Health neonatologist at UnityPoint Health-Meriter. “We are undertaking a large clinical study of preterm infants, trying to understand why some fail to thrive,” she says. “Our ultimate goal is to optimize nutrients for preterm babies,” who cannot digest many nutrients.

As with fertility, Brenner has a personal motivation. “Our first child was born early, and I experienced the angst of a parent whose child is in the neonatal ICU.”

BluDiagnostics aims to obtain Food and Drug Administration approval and reach the market by 2017, but Brenner is already thinking beyond fertility. “We will provide unprecedented data, and we are thinking creatively about how it can contribute to women’s health. Most studies collect self-reported data on menstrual cycles: what you ate, your mood and exercise, and try to reach medical conclusions. For the first time, we will marry that data with cold, hard numbers to support a better understanding of relationships between hormonal trends and underlying disorders.”

Brenner says Madison has proven a fertile place to develop this technology. “Having the lab, sharing this vision with Doug Weibel, my lab leader, and having great support from our department have all been key. I was given plenty of space, and all the tools I needed, to explore the idea.”