Two of 10 new federal grants aimed at “leapfrogging” technologies to improve food security were awarded to scientists at the University of Wisconsin–Madison’s College of Agricultural and Life Sciences.

The program emerges from a new collaboration between the National Science Foundation (NSF), the National Institute of Food and Agriculture, and the United Kingdom Biotechnology and Biological Sciences Research Council.

A shortcut to efficient hybrid production

Hybrid varieties are a key to production in a wide range of annual crops, and seed companies spend years developing the inbred strains that are cross-bred to make hybrid seeds for each planting. Producing these inbreds is a bottleneck in plant breeding, says principal investigator Patrick Krysan, a professor of horticulture at University of Wisconsin–Madison. 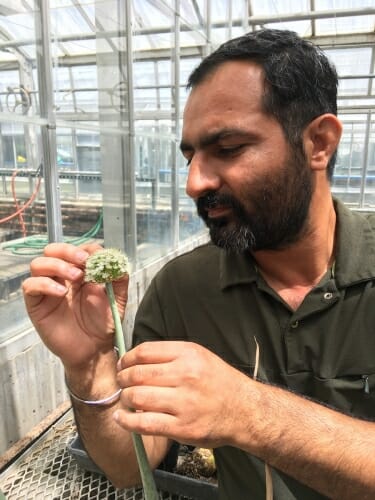 Jiffinvir Singh Khosa, a postdoctoral scientist in the labs of Patrick Krysan and Michael Havey at UW–Madison, inspects an onion flower to check if it is at the proper developmental stage to supply tissue for genetic transformation. Photo courtesy of Patrick Krysan

With support from a breakthrough award, Krysan, professor of horticulture Michael Havey, and Stephen Jackson of the United Kingdom, are developing a shortcut to make these inbred lines in one year.

The researcher will use the modern gene-editing technique CRISPR/Cas9 to alter a key gene in the onion, to create seeds with unpaired chromosomes. After further changes, they aim to produce “instant inbred” lines for much faster production of hybrid seeds. They will test several gene-editing tactics to quickly choose the most efficient approach to modifying genes in many crops.

“Scientists have spent many decades studying the fundamental principles of plant biology,” says Krysan.  “With the new gene editing technologies that are revolutionizing biological science, we finally have the tools that we need to efficiently move discoveries out of the lab and into the field.  Our project is a great example of how basic science can be translated into a practical benefit for agriculture.”

“There is a global need to develop crop plants that yield greater food, feed, fiber and bioenergy related products,” says Heidi Kaeppler, associate professor of agronomy, who leads a second UW–Madison project supported by a breakthrough award. “The need to develop crops with an increased tolerance to stress from drought, disease and insects, with reduced environmental impact, has never been greater.” 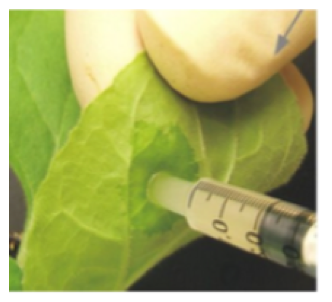 Because current genetic modification techniques are inefficient or unworkable with several important crops, Kaeppler aims to develop a method to genetically engineer or edit plants using ultra-small, biodegradable, synthetic particles. These “nanoparticles” may be used to ferry genes or gene fragments, or otherwise assist in the planned transformations.

The project aims to:

Such a system, Kaeppler says, “would enable more rapid advances in crop genomics and produce crops with enhanced traits and performance. We expect it would also apply to other organisms as well.”