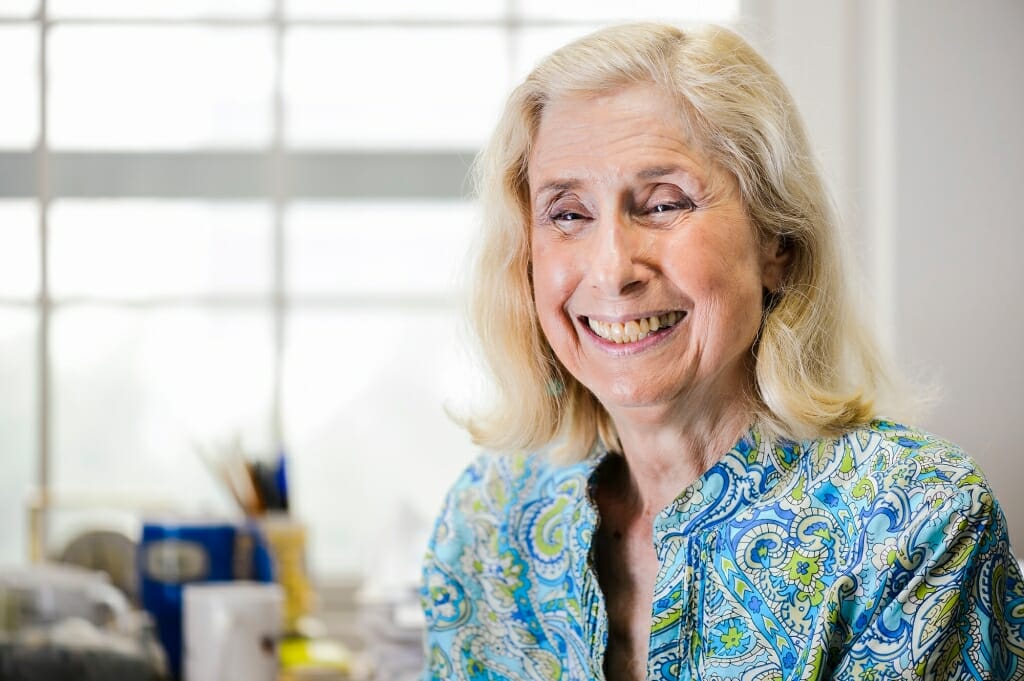 Grace Wahba was the first female faculty member in the Department of Statistics at UW–Madison. Her career there lasted 51 years, ending with her retirement in August 2018. Photo: Jeff Miller

When Grace Wahba was in junior high school, her father gave her a chemistry set.

That might not seem like a big deal, but this was the 1940s. Girls were supposed to play with baby dolls, not tubes and beakers.

But Grace wasn’t troubled by defying expectations — a trait that seems to have carried throughout her life. She just pursues what interests her and lets natural curiosity be her guide. In her case, that led to a groundbreaking career in statistics at a time when the odds for a woman earning international acclaim in that field were unlikely, to say the least.

She grew up in Montclair, New Jersey. Her father, Harry Goldsmith, was an attorney for a pharmaceutical company. He’d come home from work and talk about his day. She was fascinated.

Her dad gave her his old physics notebooks, something that many of us would have used as a doorstop. Not Grace. She dug in, only becoming more and more interested in figuring things out.

“I think my father was one of the first feminists,” she says.

‘I want to be an engineer’

In junior high, her school had a career day. Boys were given booklets full of options: engineer, doctor, lawyer, business executive.

For the girls, it was secretary, nurse or teacher.

“I don’t want to do that,” Grace told her parents. “I want to be an engineer.”

The school didn’t care. But her parents did. And that was enough.

“I didn’t realize how unique I was until high school,” Wahba says. “In high school, boys didn’t like smart girls.”

What did they know, anyway?

Related: About this series

When she enrolled at Cornell University, women had to live in the dorms. A strict curfew was enforced nightly. No men allowed.

“You were punished if you were late,” Wahba says.

The rules did not apply to everyone. The men could live in their own apartments. Curfew? There was no such thing. And they could have female visitors at all hours — just not women from Cornell.

She was the only woman in her advanced calculus class. She recalls Professor Mark Kac saying in a thick Polish accent, “This class will separate the men from the boys — and you, Miss Goldsmith.”

“That is a cherished memory,” she says.

In 1965, Wahba was working at IBM and part of her job was looking at data from satellites. One problem was how best to orient a satellite for some fixed purpose, say to focus on a known feature on the moon, based on observations of the satellite’s position relative to specific stars. The mathematical formulation of this problem involves matrices and linear algebra and is known as “Wahba’s Problem.”

Give “Wahba’s Problem” a Google and you’ll see it appears as part of thousands of scientific papers.

“It turned out to be very important for space flight,” Wahba says.

Just a year after publishing this groundbreaking research, she completed her doctorate at Stanford University.

“What I really wanted was the credentials to get a real job,” she says. “I wanted to work.”

And she needed to. She was 33 and singlehandedly raising an 11-year-old son.

Wahba was the first female faculty member in the Statistics Department when she came to UW–Madison in 1967. Her career there lasted 51 years, ending with her retirement in August 2018.

Her work centered on the extraction of information from large data sets, particularly in the medical field. Wahba has been elected to both the American Association for the Advancement of Science and the National Academy of Sciences. She has supervised the theses of no fewer than 39 graduate students from four continents. Many of her former students have gone on to be department chairs or fellows at universities all over the world. She still has two doctoral students, including Xiaowu Dai, who is from Shanghai, China.

“Grace is one of the most famous professors with the highest accomplishments in statistics,” Dai says. “She was doing machine learning even before this concept came in computer science.”

“Grace is always motivating, enlightening and supportive in all stages of my research,” Dai says. “With Grace, I have learned much more than intelligence, research, dedication and passion. She is a great role model.”

Role models are important in any discipline but are crucial in a field that has long been dominated by men, says Gloria Marí-Beffa, associate dean for the natural, physical and mathematical sciences.

“It shows other men and women that females can go as high as they want in the field,” Marí-Beffa says. “It shows the junior members that, even in conditions that were more dire than the ones we currently have, there are ways to get to the top. It brings down arguments that are rigged against females (for example, that women’s thinking is different, less apt for STEM disciplines). It helps us focus on the real problems.”

Marí-Beffa, a professor and chair of the Department of Mathematics, helped the math department recruit and retain more female faculty than nearly any other major research university in the country. She has served as the chair of the equity and diversity committee in the College of Letters & Science and volunteered as a coordinator of a UW mentorship program that connects high school girls with undergraduate and graduate students in math and science majors.

While progress is being made, the work is far from over.

So many smart students

“We, as a society, have a problem if females do not participate in STEM because they believe they cannot do it, or it is not a feminine thing to do, or their teachers told them they are not good at math. I heard a teacher say that to a six-year-old girl. Six!,” Marí-Beffa says. “We need everyone to pitch in if we want to be the best we can.”

Wahba says she’s enjoyed her time at UW–Madison, especially meeting so many smart students, and she’ll miss them.

The university also brought her together with the man who became her husband, fellow statistician David Callan. The two met while Callan was on a summer visit to Madison following a postdoc in the math department.

Some men might have been intimidated — and rightly so — but not Callan.

“I was impressed,” he says. “I could see that everyone who came in contact with her was the better for it.”

They married last November after a 30-year engagement.

“We just didn’t get around to it,” Wahba says.

But there will be plenty of time now. She missed the inaugural fall faculty meeting for the first time in decades. Back to school is for other people now.

“It feels weird,” she says.

As for life after retirement, she hasn’t really thought about it, other than to dream of mornings spent sleeping in. She’s been too busy packing up decades of her career — endless stacks of books, papers and gifts from students.

She’s also an active race walker, a passion she discovered five years ago. Wahba has a collection of medals, including a bronze in the 5K race walk from the 2017 National Senior Games.

“It’s very impressive,” she says. “Except I have to tell you, only four people registered. And one was disqualified.”

‘Nose to the grindstone’

Wahba has become a pioneer in methods for smoothing noisy data and has made influential impacts in many fields, such as demographic studies, machine learning, DNA microarrays, risk modeling, medical imaging, and climate prediction, among others. Wahba received an honorary doctorate from the University of Chicago in 2007.

Would she have done all that if she hadn’t gotten that chemistry set? Fortunately, we don’t have to find out.

A lot has changed during Wahba’s career. While more doors are open for women, that doesn’t mean they’re easy to walk through.

Her advice for women is the same as for men.

“If you want to do well, pick something you love and put your nose to the grindstone. It takes a lot of hard work, time and a certain amount of luck.”