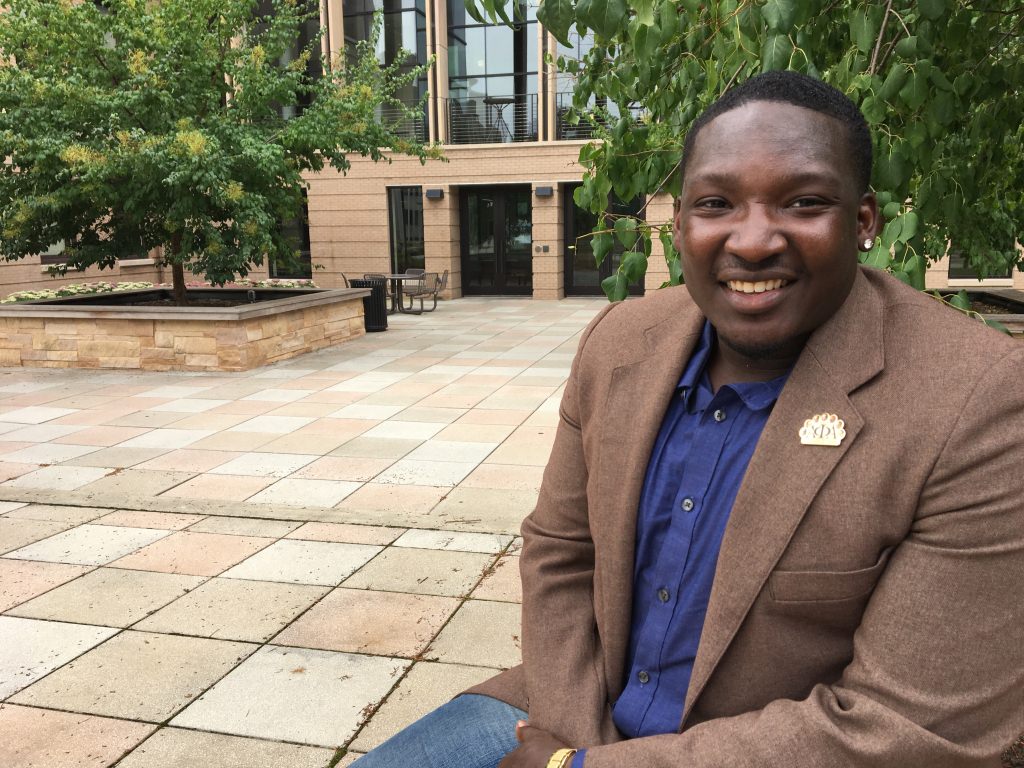 Kyree Brooks, pictured in the plaza of the UW–Madison School of Education, will be pursuing a master’s degree in special education beginning this fall. Through his research, he studies the impact of television viewing on children with autism. Photo by Doug Erickson

During his undergraduate years at UW–Whitewater, Kyree Brooks increasingly sought to use his platform as a student leader to improve race relations.

It was a role he naturally gravitated to, but also one thrust upon him by campus events.

After the “n-word” was scrawled on sidewalks and in several UW–Whitewater residence halls, Brooks worked with university housing officials to develop the “Stop the Slur” campaign, which included a series of panel discussions at residence halls attended by hundreds of students.

“I realized it was a moment to take our anger and really turn it into something that could educate people,” says Brooks, who was vice president of the Black Student Union at the time. “So we talked about the history of the ‘n-word’ — where it comes from and why some people still use it. And we let students ask a lot of questions.”

Brooks, a Milwaukee native who is now a first-year graduate student at UW–Madison, became a prominent voice in the media throughout the controversy.

“My advice to undergraduates when these campus climate issues arise is to continue to be present in the community, to keep your ears peeled, and to educate others on your experiences and your views,” he says. “That’s the best way we can understand one another and be inclusive to all.”

Brooks contributed in many ways to the UW–Whitewater community. He was a member of the Hawk Squad, a select group of students who help incoming freshmen transition from high school, and he was part of the Warhawk Ambassadors, a group that promotes UW–Whitewater through service to the university and the community.

He is a member of Alpha Phi Alpha, the first African-American, intercollegiate Greek-lettered fraternity, and was inducted into the UW–Whitewater Greek Hall of Fame.

His final year at UW–Whitewater, he was awarded the Reuben Klumb Award for Outstanding Senior Male for his leadership skills, campus involvement, promotion of school spirit, scholarship, and participation in extra-curricular activities.

“I tell students, whether they’re in high school or college, to find their passion,” he says. “Don’t follow others. Find your own path.”

At UW–Madison, he will be pursuing a master’s degree in special education. In his research, which he began as an undergraduate at UW–Whitewater as part of the McNair Scholars program, Brooks studies the impact of television viewing on children with autism.

Why I chose UW–Madison: It allows me to be close to my friends and family while embarking on a new journey in a great field at a top-notch university.

What I’m most looking forward to this year: Establishing genuine connections with faculty and staff in the special education area, particularly in the study of autism. Opening an autism diagnosis clinic or unit has been a long-term goal of mine for some time now. I’m looking forward to meeting students with similar aspirations.

Something on my Bucky list: Attend a Division I sporting event for the first time.