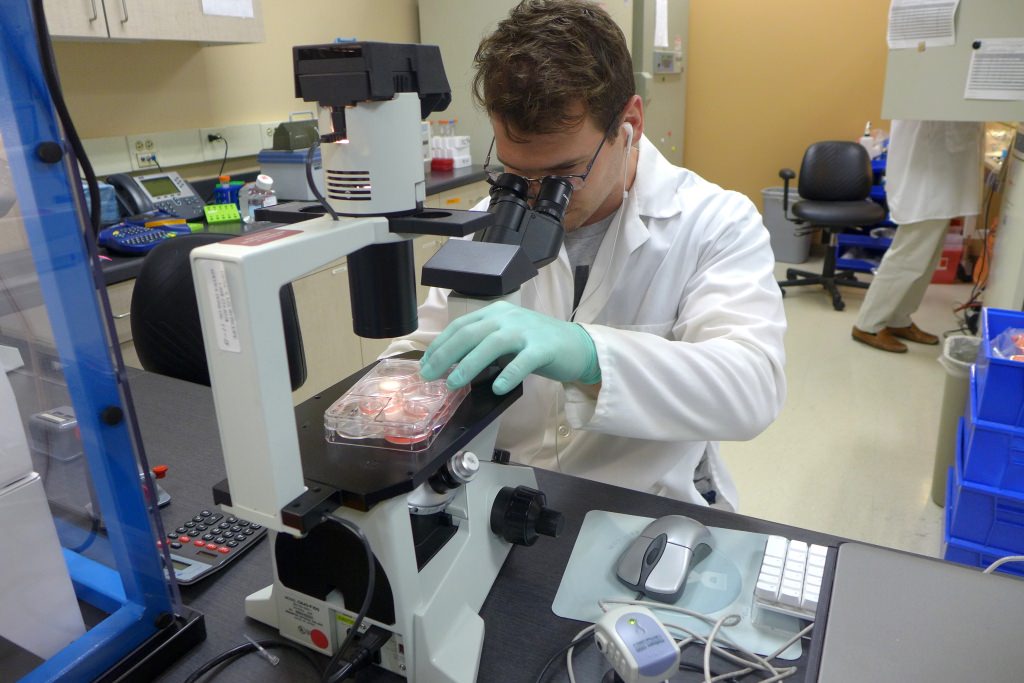 Leaders of the University of Wisconsin–Madison lab that first transformed human stem cells into brain cells have started a company that produces and sells specialized neurons to drug researchers.

BrainXell develops neurons from stem cells in its Madison lab, then freezes them for shipment. Once thawed in the customer’s lab, the cells undergo a final step of specialization and become neurons like those found in the spinal cord or brain.

BrainXell is based on technology developed in the lab of co-founder Su-Chun Zhang, a professor of neuroscience and neurology at the Waisman Center on the UW–Madison campus.

The company generates neural progenitor cells and freezes them so customers can start to work with the neurons within a week, says a second co-founder, Zhong-Wei Du, who began working with neural stem cells in Zhang’s lab about 14 years ago. “They don’t have to wait two or three months as they would previously. Using neurons that are exceptionally pure, our customers can test thousands or millions of compounds as potential drugs.” 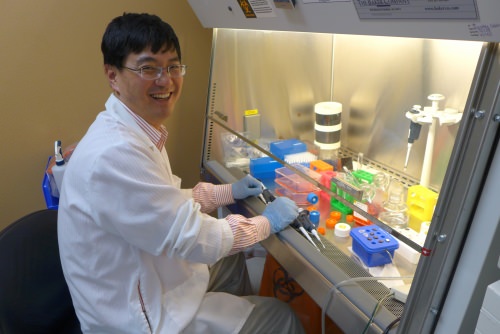 In 2009, Zhang converted induced pluripotent stem (iPS) cells into neural stem cells, and then further specialized them into specific neural types. iPS cells are produced from adult tissue, not embryos.

The extremely delicate development procedure uses various combinations of proteins, other chemicals and coatings that cause a stem cell to mature from a featureless cell into a highly specialized nerve cell. “You have to know how to drive the cells along certain paths by changing many factors, their concentrations and their timing,” says Du. “Many combinations are possible. Some work well, but most don’t.”

BrainXell, which has five employees, began operating in July 2015 and made its first sale one year later.

The company has four types of cells on the market. One makes GABA, a chemical that slows neuronal activity. Another makes glutamate, which excites neurons. A third variety makes neurons that produce the neurotransmitter dopamine; a deterioration in these cells causes the movement disorder Parkinson’s disease. The fourth type, motor neurons, connect with muscles to control movement.

Other companies are entering the market for neural stem cells, but BrainXell has the advantage of experience, says Du. “Our process is based on nearly 20 years of work, where we developed the ability to make large quantities and specific types of pure neural cells.”

Reliability matters for the company’s pharmaceutical and biotech customers, Du says. “Results based on a small number of cells will be less valid and reproducible than those based on billions of neural cells.

“Relatively pure cell cultures also enhance validity,” Du says. “If you make cells that are only 10 percent pure, you have many other cell types in the mix. Our neurons have a purity upwards of 80 percent.”

If the neural cells descend from cells with a genetic illness, the customer can test thousands of compounds to see if any slow or stop that illness.

The focus of the assistance “is to learn to be an entrepreneur, to think in ways that permit the company to focus on the market, as well as on the technology.”

Developing new psychiatric drugs is extraordinarily expensive, and more realistic results early in the discovery process can save a lot of money. The cost of developing each successful psychiatric drug is estimated at hundreds of millions of dollars.

BrainXell has benefited from guidance — and a $200,000 award to Zhang — from the Discovery to Product (D2P) program at UW–Madison. “That gave us time to transition from the university to a private lab, and it really got us on our feet,” says Du. Other grants and advice have come from the UW-Extension Center for Technology Commercialization, the National Institutes of Health and the Wisconsin Innovation Initiative.

The focus of the assistance, Du adds, “is to learn to be an entrepreneur, to think in ways that permit the company to focus on the market, as well as on the technology. This assistance allowed us to enter the shallow end of the pool instead of diving into the deep end.”

The company’s success is firmly rooted in techniques and inventions at UW–Madison. “We are working with superior recipes for making multiple types of neural cells, in large, pure lots,” Du says. “Most experts say neurons derived from stem cells provide much more realistic results in drug screening, but until now they have been difficult to use. We think ours are more relevant, easier to use and more likely to identify compounds that succeed in the later stages of drug development.”