Fred Blattner: genetics pioneer, entrepreneurial success, and all that jazz 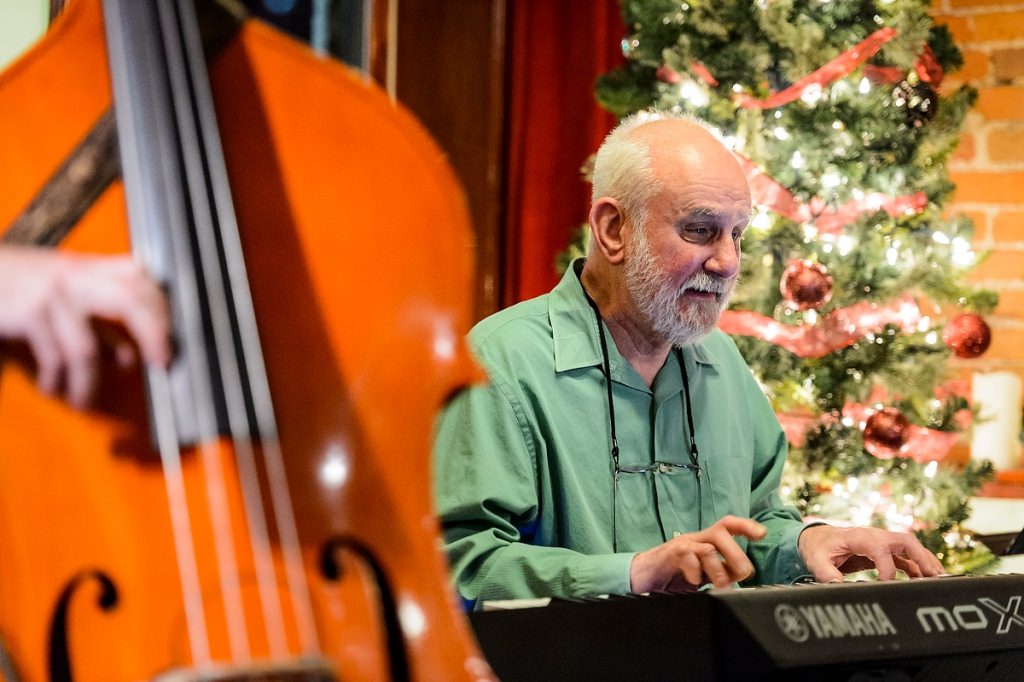 Fred Blattner, an emeritus professor of genetics and an entrepreneur, plays electric piano during the Sunday Jazz Jam at The Rigby Bar and Grill in downtown Madison on Dec. 4. Photo: Jeff Miller

Fred Blattner has been working with DNA for more than 50 years, so it seems fitting to ask him: What’s the most important result of his multi-decade quest to understand the genome, the master instruction sheet of life?

Blattner, an emeritus professor of genetics at the University of Wisconsin–Madison, was the first person in Madison to start reading, or sequencing, the genome code contained in DNA.

Blattner, a long-time professor of genetics at the University of Wisconsin–Madison who is now an emeritus professor, was the first person in Madison to start reading, or sequencing, the genome code contained in DNA.

His first work deciphered only 24 “letters” of the sequence, but in 1972 that was exciting enough to be published in the prestigious journal Science. Blattner went on to publish millions of these letters of the memory molecule, and to found or co-found three successful companies all focused on DNA: DNASTAR, Nimblegen and Scarab Genomics.

In response to the question, Blattner talked about how the genes of immunity and bacteria evolve by rearrangement and mutation. He described the delicate balance between what the genes remember from the past and how they improvise to cope with an uncertain future.

And he talked about jazz.

The immune system requires such an outlandish number of unique antibodies that the 3 billion letters of the human genome cannot possibly code for them all. So the genome runs a mix ‘n match scheme that builds antibodies in an uncountable number of combinations, which are then sorted to prefer those best able to kill an invading organism. 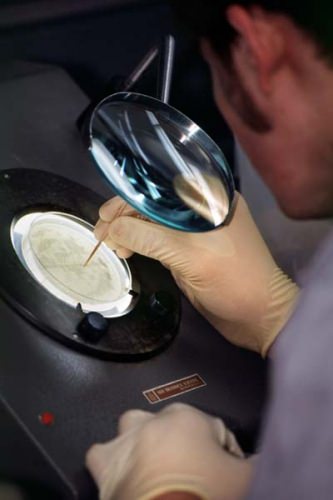 A researcher picks bacteria colonies to use for genetic DNA sequencing in the Blattner research lab in 2000.

Antibodies are proteins, and proteins are compositions of amino acids, and each amino acid is encoded by a three-letter chunk of DNA.

And then, quickly, the conversation moves to musical theory, where three notes comprise a major chord, the foundation of Western music. Blattner had started classical piano at age five and began listening to saxophonist Charlie Parker and other bebop giants in college. Bebop, with its disciplined chord structure overlain by surprising (and sometimes humorous) improvisation, led Blattner down a path that has parallels (at least in his mind) to the genetic realm.

After all, an improvised line is really a mutation of the original, he notes.

Blattner doesn’t just play jazz piano. He performs. When the Willy Bear bar opened on Williamson Street in Madison, in about 1973, Blattner’s quartet was the opening act.

Blattner was born in St. Louis, and moved at age six to Houston, when his father was invited to lead the department of pediatrics at Baylor College of Medicine.  Blattner majored in physics at Oberlin College, where, to his memory, DNA was not important enough to be mentioned in his first biology class.

In 1968, he got a Ph.D. in biophysics at Johns Hopkins. “What I was doing was formulating a world view of trying to make all this stuff connect and make sense,” he says. “A new department connecting biology and physics was perfect for me.”

At Hopkins, Blattner used a desk-sized computer that recorded programs and data on punched paper tape. He found programming so engrossing that when President John Kennedy was killed on Nov. 22, 1963, “There was all this rustling of running around, but I don’t know if I stopped working. I’m not sure it registered on me.”

Although Blattner says he did not think of computers as “anything different than a whole lot of tools,” he admits to “working far more hours on coding than I should have.”

Blattner was intrigued by Waclaw Szybalski, whose stellar career at UW–Madison included a study of how “promoter” regions on DNA could amplify the output of genetic code, and he spent six years as a postdoctoral fellow in Szybalski’s lab. With professor James Dahlberg, Blattner determined the 24 bases mentioned above — the first “reading” of promoter regions.

“Dr. Szybalski put a change in my thinking,” Blattner says. “He showed how to approach really complex observations, where the information was inconsistent, even seemed crazy, and how to distill something that makes sense from it.”

Szybalski, who had a long and deep involvement with the biggest names in genetics, says Blattner was “very motivated, extremely ambitious, very sharp, and good with his hands. He was also enthusiastic, dreaming of the things that he would find. I was trying to bring him down to earth, to do experiments that could be published to help his future career. He was always selecting subjects that would be very important.”

As he rose to full professor of genetics, Blattner also expanded his use of computers to handle the stream of data as it changed from a trickle to a flood. With smaller computers finally becoming available in kit form, Blattner successfully challenged a campus order that he share time on campus mainframes, and in 1975 or so, bought the first computer for his lab.

In 1983, Blattner and John Schroeder, an undergraduate computer science major working in his lab, founded DNASTAR, a software company to provide molecular biology applications for personal computers. DNASTAR now employs 35 in Madison, and Schroeder is vice president of research and development, and a significant owner.

Also in 1983, Blattner was the one of the first to propose in print the sequencing of an organism’s entire genome. He chose E. coli, a usually benign bacteria living in the human intestine that had become the model organism of bacteriology and a workhorse of biotechnology.

In 1997, Blattner and 16 co-authors reported the complete E. coli genome sequence, in the journal Science, complete with a highly unusual six-page foldout showing what they had found. In 2001, that work set the stage for a second business, Scarab Genomics, which is producing E. coli that have been stripped of trickster “jumping” genes and toxin genes, leading to higher product yields and greater safety in pharmaceuticals. Scarab has about 15 employees (all in Madison), and is locally owned. Scarab’s technology was developed in Blattner’s lab and is licensed from the Wisconsin Alumni Research Foundation.

In 1999, Blattner, Franco Cerrina, a professor of electrical and computer engineering, and Michael Sussman formed Nimblegen to make advanced “gene chips” — semiconductors that recognize thousands of strands of DNA, to aid the ongoing revolution in faster and cheaper genome sequencing. Nimblegen was sold to Roche Inc., in 2007; Blattner used his proceeds to build up Scarab and DNASTAR.

Sussman, who now directs the Biotechnology Center on campus, says, “Working with Fred was fantastic. He was always open to new ideas — you could bounce things off of him. He could be difficult at times, but he was kind of like the Jamie Thomson of genomics.” (In 1998, Thomson, at the UW School of Veterinary Medicine, became the first person to grow human embryonic stem cells, which help start a revolution in medical research).

Sussman says when he nominated Blattner for a named chair in genetics, “Half a dozen Nobel laureates wrote letters. Everybody recognized Fred’s brilliance.”

“Fred has many more ideas than we can turn into products.”

Blattner gave a nod to another bright light in his field by naming his endowed chair for Oliver Smithies, whose groundbreaking work on “knockout genes” in living mice began at UW–Madison, during early collaborations with Blattner’s group. Smithies won the Nobel Prize for Physiology or Medicine in 2007.

Blattner has gradually retired from the University to spend more time at his two businesses. At DNASTAR, “he’s still the visionary for the company,” says Tom Schwei, vice-president and general manager. “He drives the strategic direction; he’s the major innovator. Fred has many more ideas than we can turn into products.”

The company says that more than 50,000 scientific articles have used its program, LaserGene, which now includes a module that predicts the shape of a protein based on the code that makes it. That’s a lot more difficult than it sounds.

Blattner is obviously a hands-on CEO: He was writing code the first time a writer visited.

On the second visit, the discussion ricocheted among jazz, the immune system, and of course DNA.

“The immune system is a brilliant system, beautifully combining randomness and extraordinary precision and calculations,” Blattner says. “DNA is totally structured, yet diversity can be generated, as with immune antibodies. There is an elaborate mechanism for error correction, to prevent too many mutations. The balance between the underlying structures that create diversity, and all the feedback loops that control diversity, are, I think, the most striking result of genomic studies. It’s a little like jazz.”

Maybe that’s Blattner in a nutshell: a balance between structure and innovation that ends with what he calls the “purposeful, directed creation of diverse new ideas.”

How does this view of innovation and tradition inform a successful record of triple-entrepreneurship? “Being an entrepreneur is like jazz,” he says, “because of the fact that you are doing something risky, that is hoped to come out well. In jazz, there is a vision behind it when you are playing something, at least if you are improvising. Jazz music’s understanding of music theory is so much closer to what a scientist would call theory, because it gives you a rhyme or reason for predicting what something will sound like. It’s a combination of empirical and theoretical. In a scientific theory, you can make a prediction. In jazz, you can do the same thing.”

Blattner, who says he plays most days, at home and at Madison jam sessions, adds, “I don’t think too many people have gotten ahold of this particular crossover between science and music. This presents a unifying theory. The immune system, the piano and the genome fit into a coherent, life-spanning saga.”

And then it’s time to get back to business: a contract negotiation is pending.