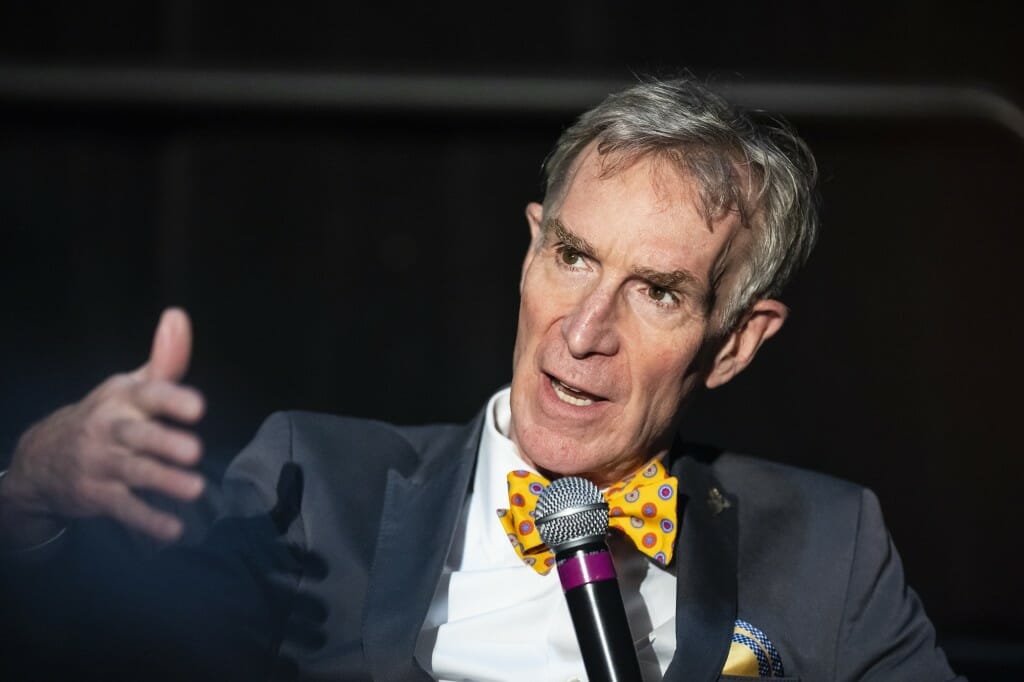 Nye “The Science Guy” speaks during his presentation, “Let’s Talk Climate Change, a Conversation with Bill Nye,” before a student audience of nearly 3,000 at the Kohl Center. Photo: Jeff Miller

It was no surprise that tickets to see Bill Nye, a fixture of many UW–Madison students’ childhoods, were snapped up in minutes. But “the Science Guy” made sure his Wisconsin Union Directorate Distinguished Lecture Series appearance was not kids’ stuff.

Nye drew about 3,000 people to the Kohl Center Monday for a conversation in which he asked the audience to be optimistic about the future and to “change the world,” citing the US Constitution’s references to science in a call for federal regulation to turn the tide against climate change. 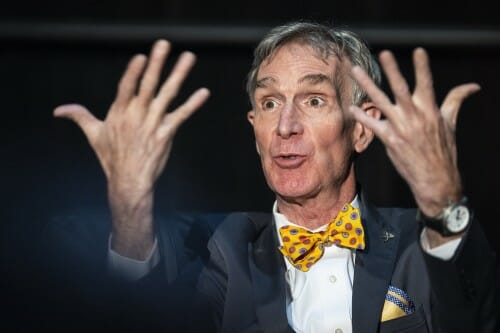 “They used the word ‘science’ in 1786 because they realized the value of science and innovation to our economy, our ability to compete internationally, and have a military,” said Nye, who worked as a mechanical engineer before hosting the popular science-themed TV show in the 1990s that made him a prominent science communicator. “They realize the great value, and it’s truer than ever today”

The problem is, according to Nye, many representatives have forgotten the Constitution’s directive to promote the progress of science. That’s where citizens — with their votes, their voices and their choices as consumers — need to step in and demand changes like public investment in renewable energy sources and widespread shifts in transportation habits.

It can be done, with the right mindset, he told the crowd.

“You have to be optimistic or you’re not going to get anything done!” said Nye. “If the Badgers come in here and think, ‘We’re going to lose,’ who’s going to show up? You have to go in like you are going to win!” 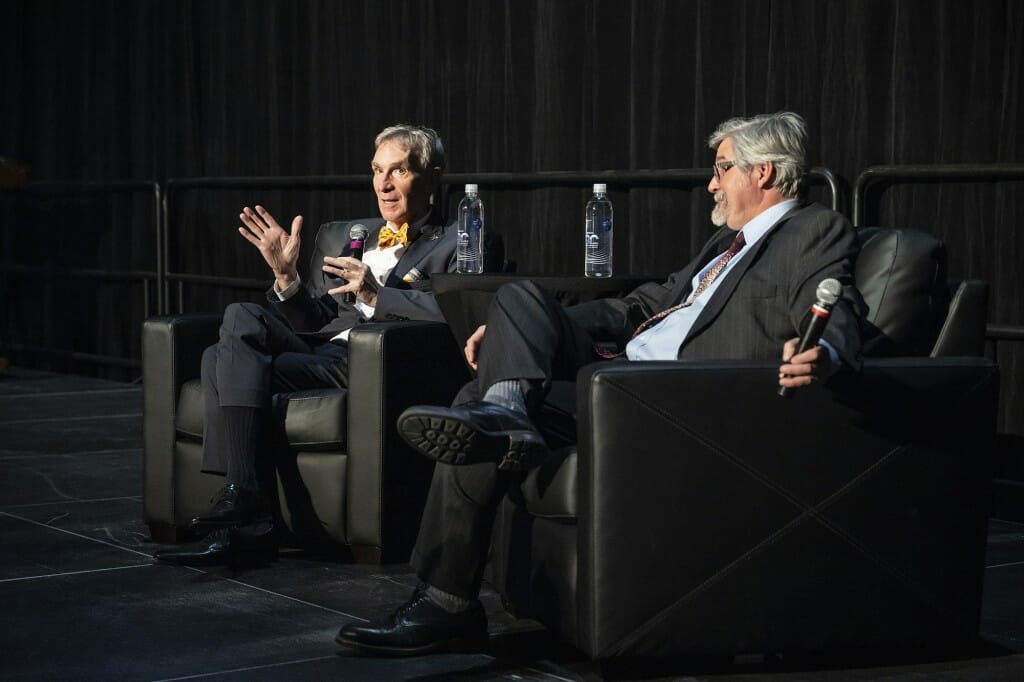 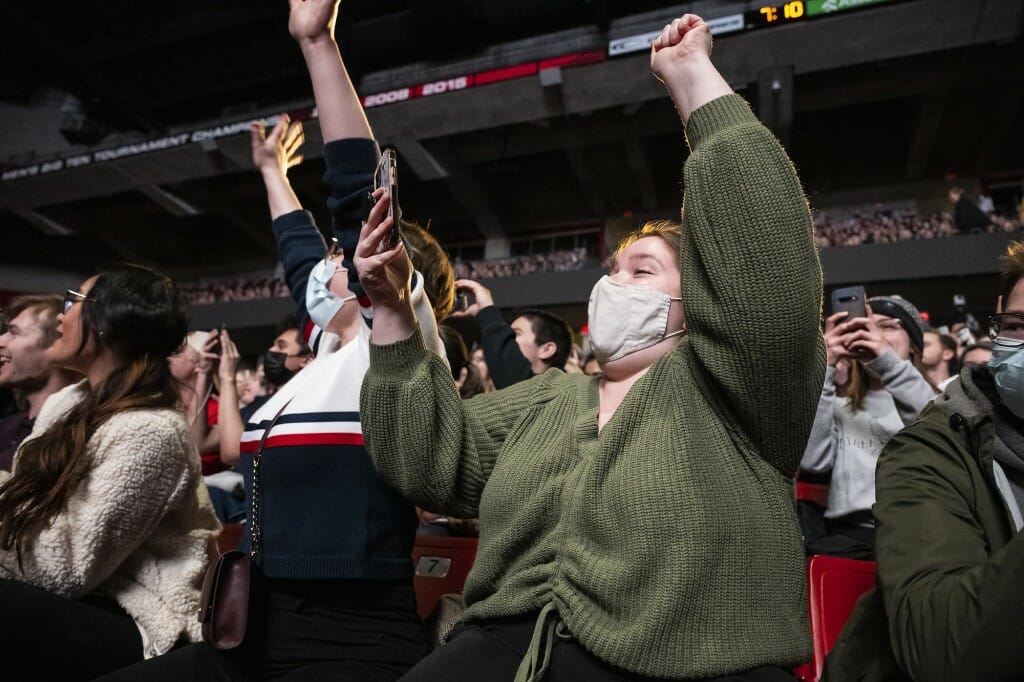 At right, undergraduate super-fan Sydney Kurszewski – who was overhead saying she was more excited to see Bill Nye than any concert she’s been to – and her fellow first-year classmate Emily Johnson, at left, cheer as the science educator and television personality takes the stage for Nye’s presentation. Photo by: Jeff Miller 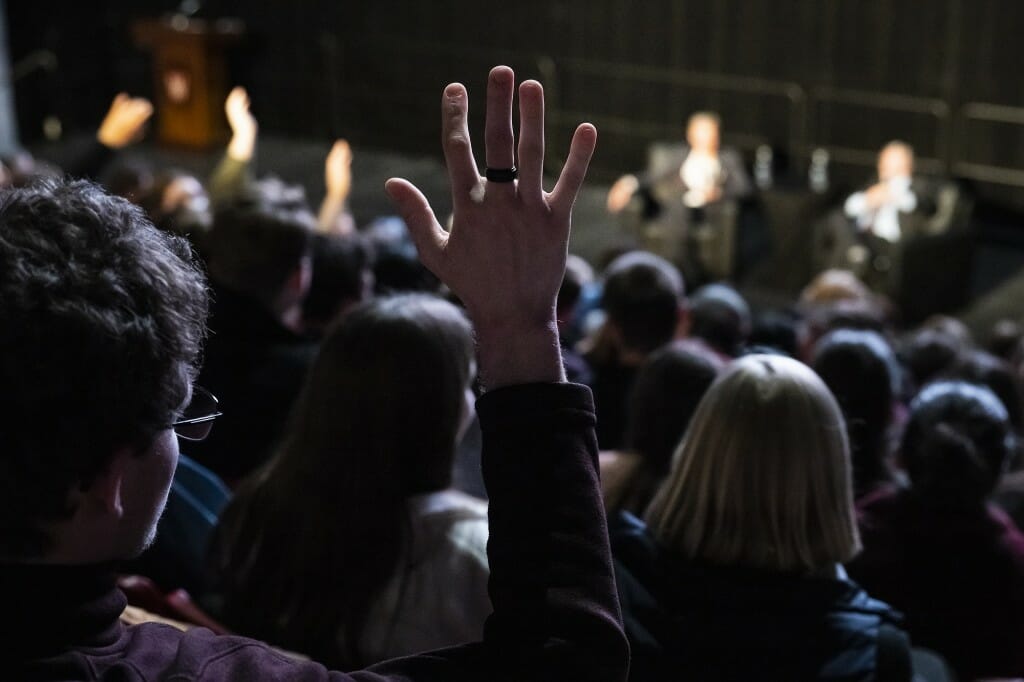 An audience member raises their hand to ask a question of science educator and television personality Bill Nye. Photo by: Jeff Miller 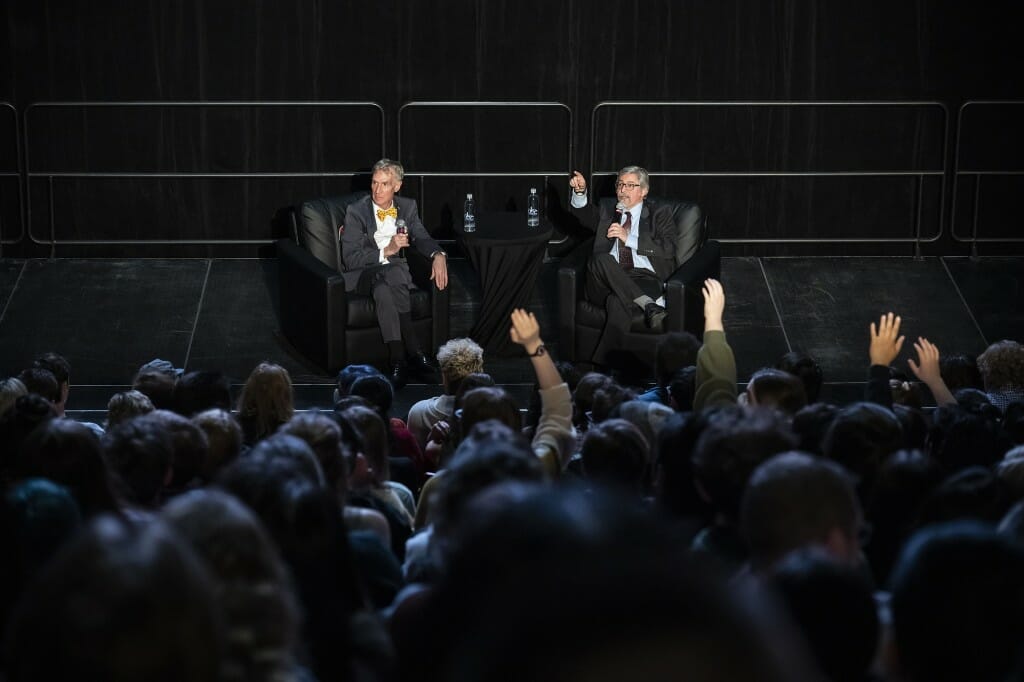 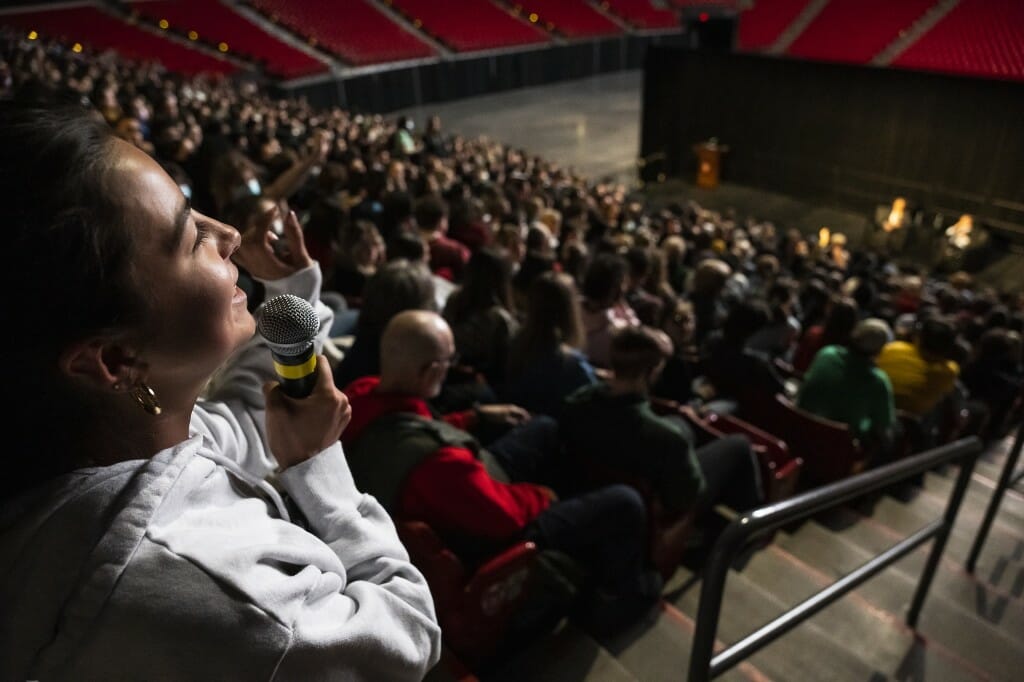 First-year undergraduate Amelia Lechner ask the question, “What do you think the implications of the Elizabeth Holmes/Theranos fraud scandal are for the future of science startup businesses?”, of science educator and television personality Bill Nye. Photo by: Jeff Miller 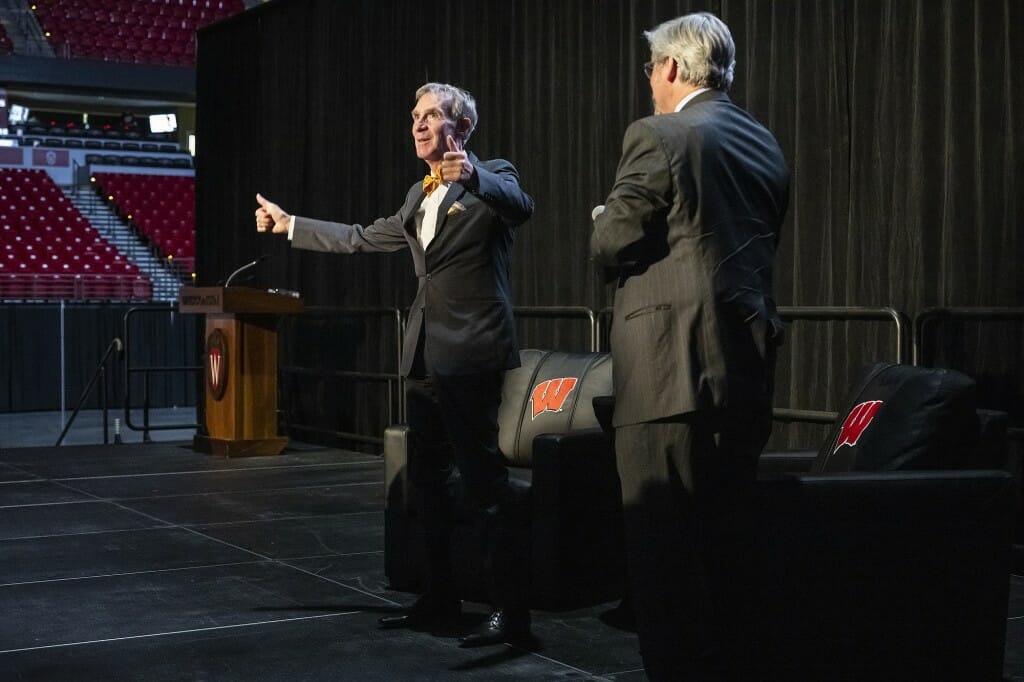 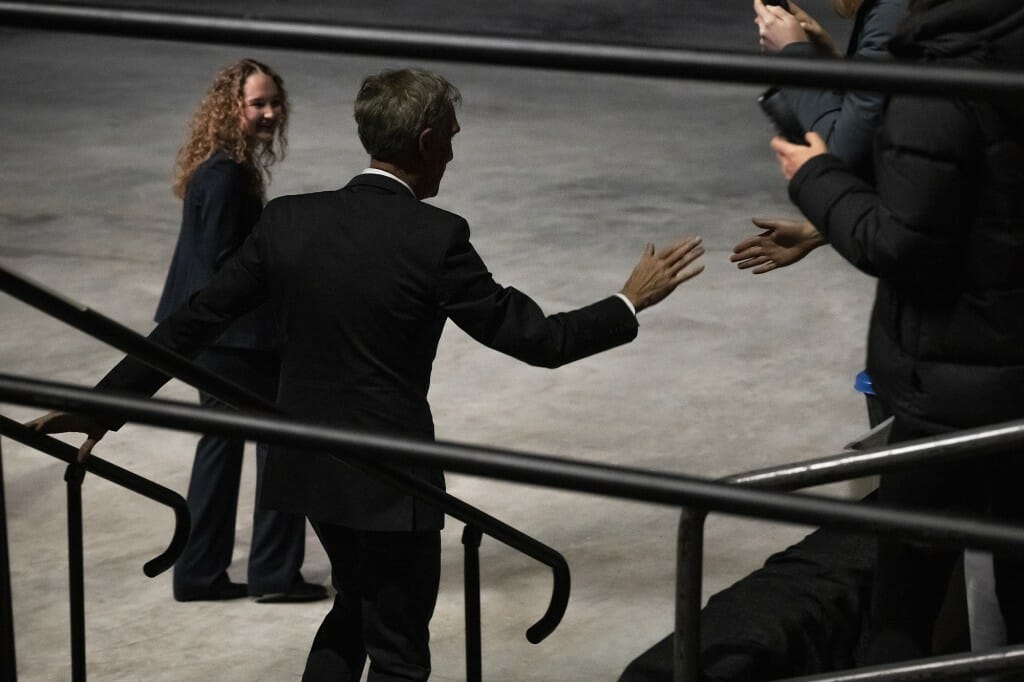 Nye walks off stage and reaches out to acknowledge a cheering audience member following his presentation. Photo by: Jeff Miller 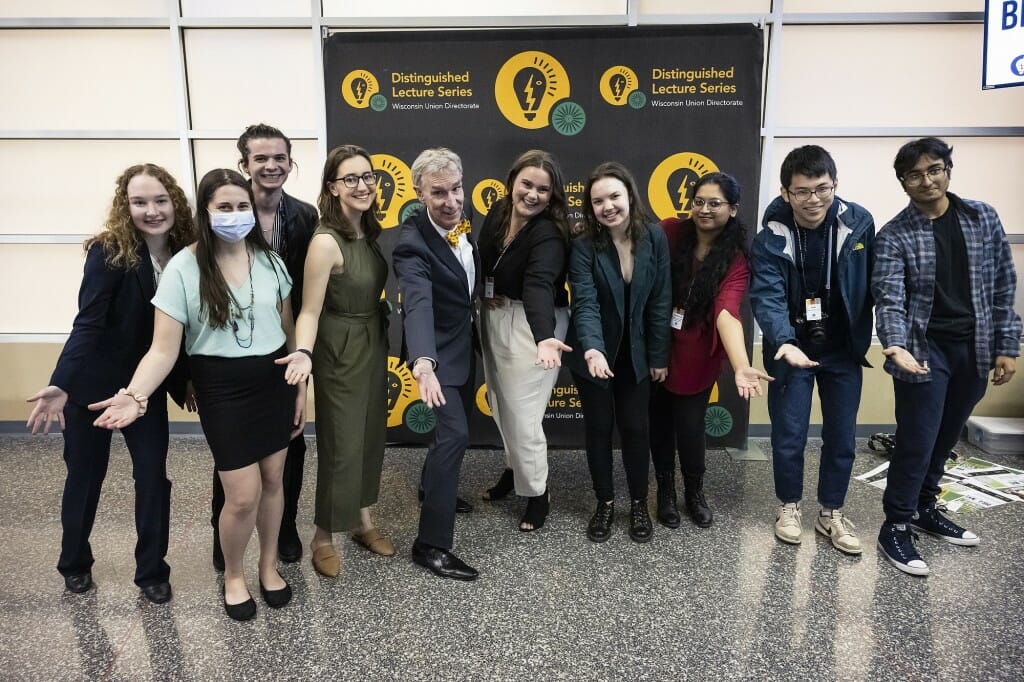 Nye poses for photographs with student organizers and members of the Wisconsin Union Directorate during a private reception. Photo by: Jeff Miller 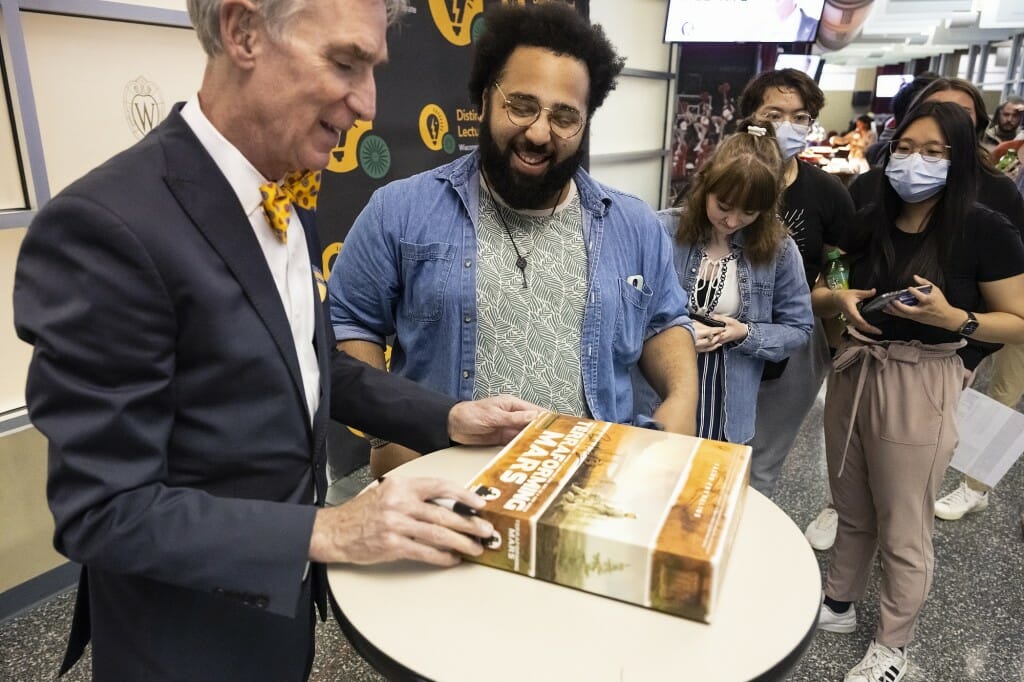