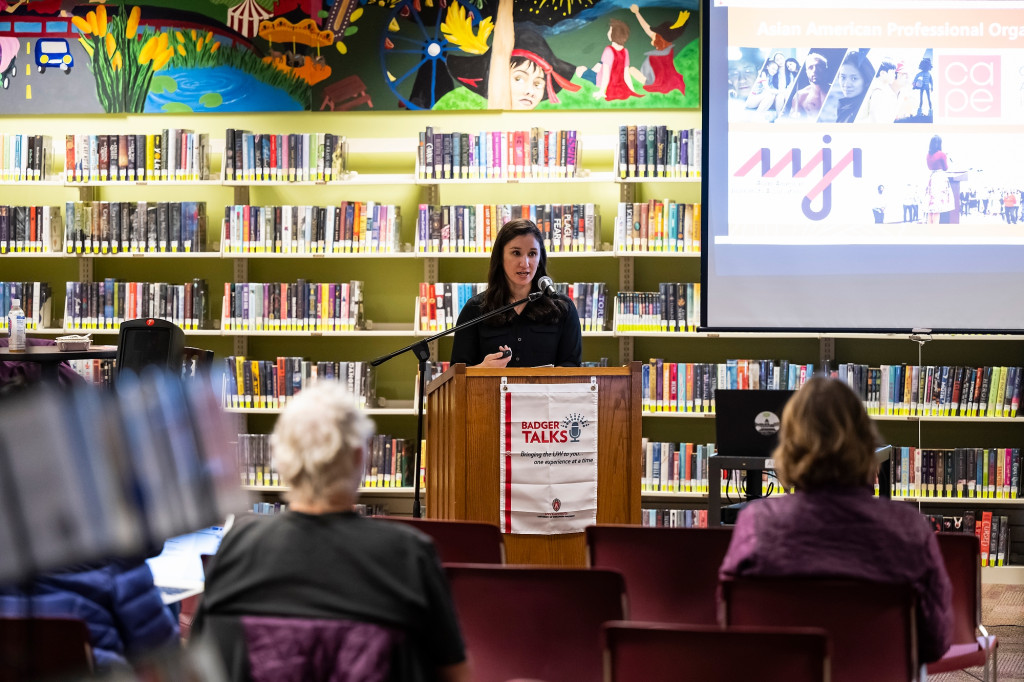 Through in-person and online content, Badger Talks extends the resources of UW–Madison to the residents of Wisconsin. Lori Kido Lopez, professor of communication arts and director of the Asian American Studies Program, speaks on “How Asian Americans Have Fought for Better Representation” during a Badger Talks event at the Mt. Horeb Public Library. Photo: Jeff Miller

A program that sparks connections between the state’s flagship campus and locations statewide has reached an expansive number of Wisconsinites over the past year by growing partnerships and methods of delivery.

Badger Talks serves as the official speakers’ bureau for the University of Wisconsin–Madison, offering presentations, workshops and performances by UW experts from all departments and colleges, as well as from the Division of Extension.

Over the past two years, the program­­ — housed under the UW Connects umbrella in the university’s Office of State Relations­ — has significantly grown its statewide reach by cultivating new partnerships for in-person events and by launching virtual and digital programming, including a podcast. 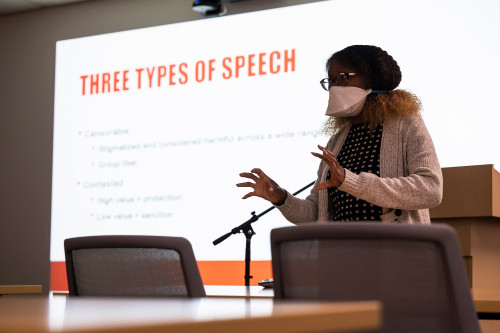 Franciska Coleman, assistant professor of law and associate director of the East Asian Legal Studies Center, speaks on “The Anatomy of Cancel Culture” during a Badger Talks event at the Middleton Public Library. Photo: Jeff Miller

“Our mission is to extend the resources of UW–Madison to the residents of Wisconsin,” says Fran Puleo Moyer, who heads Badger Talks as associate director of outreach programs at UW Connects. “To that end, we know the importance of bringing programming to Wisconsinites where they are, both in person and online. The past two years have shown how diversifying our methods of delivery can expand our reach and accessibility.”

The combination of virtual programming and renewed in-person offerings has increased the number of people who connect to UW­–Madison through Badger Talks, which now reaches more than 400,000 people around the state each year. 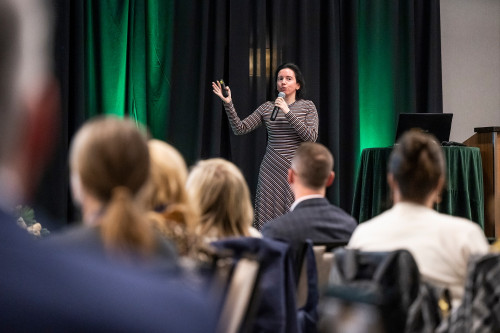 Presenting on “What is a Healthy Mind,” Pelin Kesebir, honorary fellow with UW’s Center for Healthy Minds, speaks to an audience of nearly 75 professionals attending a Wisconsin Society of Association Executives conference. Photo: Jeff Miller

“Online talks render distances meaningless and are highly convenient for all parties involved, so there is a lot to appreciate about them,” says Dr. Pelin Kesebir, honorary fellow at the Center for Healthy Minds at UW–Madison who presents on several topics through Badger Talks. “Sharing the knowledge that I have with others so that they can benefit from it too is a great source of delight for me…. I’m grateful for the privilege of being able to touch other Wisconsinites’ lives with the knowledge produced at UW.”

Badger Talks has received 180 requests for speakers in 2022, with approximately 75% in-person. The average estimated attendance for hosted events is 48, up from 26 in years where talks were in-person only. Forty-three counties have hosted Badger Talks this year, and the program has partnered with more than 1,400 companies and host organizations since its formation. 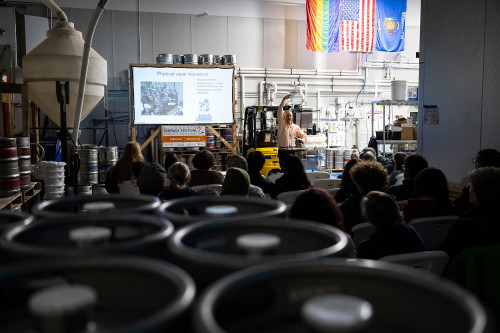 Mark Ediger, professor of chemistry at UW–Madison, speaks on the topic “Glass: From Beer Bottles to Cell Phone Displays” during a UW–Madison Badger Talks event at the Delta Beer Lab in Madison. Photo: Jeff Miller

“Our partnership with Badger Talks has really given us a chance to bring speakers to our community that we may have otherwise not had access to,” notes Deidre Martinez, executive director of the Sheboygan Chamber of Commerce, which has hosted multiple Badger Talks in their community. “As a collective of businesses, we know the importance of learning and bringing new and different ideas to our community. It helps to stimulate our economy, bring new businesses to our area and attract and retain talent.” 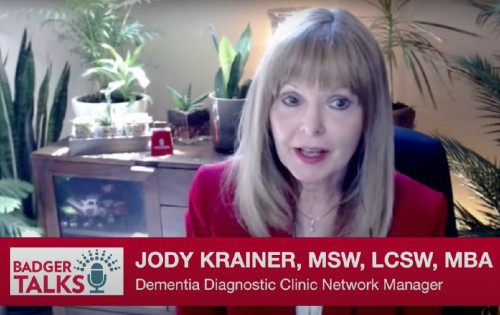 UW Connects launched the virtual livestream series Badger Talks Live (BTL) in 2020 when the pandemic prevented in-person gatherings. Since then, BTL has hosted more than 100 events and averaged over 100,000 video views each year. The series features a diverse array of speakers covering a wide range of topics, from how Wisconsin became one of the world leaders in cheese production to digital financial security to how to keep our brains healthy.

Host groups, which include non-profits, businesses, chambers of commerce, conferences, schools, libraries and other venues, can select and request speakers through the Badger Talks website. Not-for-profit sponsoring organizations pay nothing for the speaker and most Badger Talks are free and open to the public. The Badger Talks site lists upcoming public events.

“Badger Talks deeply reflects the tradition of the Wisconsin Idea — that resources and knowledge should extend beyond the borders of campus,” says Puleo Moyer. “We’re thrilled to reach more of our state’s residents.”