December’s University of Wisconsin–Madison commencement speaker is out of this world. Or at least he has been.

Captain James A. Lovell, Jr. is one of only 24 people to go to the moon and back. Lovell was on two Gemini and two Apollo missions between 1965 and 1970. His book, “Lost Moon: the Perilous Voyage of Apollo 13,” was the basis of the Academy Award-winning movie, “Apollo 13,” in which he was portrayed by Tom Hanks. Lovell’s leadership and ingenuity brought the spaceship safely back to earth after a potentially fatal explosion.

Not only that, but he’s a Badger. Lovell graduated from Juneau High School in Milwaukee and attended the University of Wisconsin–Madison for two years, participating in the university’s Naval Reserve Officers’ Training Corps before he was accepted to the United States Naval Academy, where he graduated with a Bachelor of Science degree in 1952. 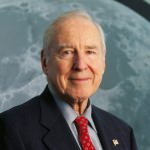 Lovell will deliver the charge to the graduates at UW–Madison’s winter commencement ceremony on Sunday, Dec. 18, at the Kohl Center. In addition, Lovell will receive an honorary degree, a distinction from UW–Madison that recognizes individuals with careers of extraordinary accomplishment. The Committee on Honorary Degrees looks to sustained and characteristic activity as its warrant: uncommonly meritorious activity exhibiting values that are esteemed by a great university.

“The Honorary Degrees Committee saw Lovell as the exemplification of the achievements we seek in an honorary degree recipient — great distinction in her or his chosen calling, allied with substantial contributions to the life of the broader community in the best traditions of the Wisconsin Idea,” says David McDonald, professor of history and chair of the committee.

Lovell was chosen for the honor last spring but was unable to accept the award at the spring ceremony. Serendipitously, the senior class officers chose Lovell as their top choice for a winter commencement speaker, unaware of the timing of the honorary degree that Lovell would be receiving.

All students who completed a degree in summer 2016, or who will complete a degree in fall 2016, are welcome to participate in 2016 Winter Commencement, including bachelor’s, master’s, doctoral and professional degree candidates from all schools and colleges.

When he retired as an astronaut in 1973, Lovell had logged 715 hours in space and 330 earth orbits. He ran several businesses since then, and found time to make contributions in the spirit of the Wisconsin Idea through work with the Council for Physical Fitness and Sports, the National Eagle Scout Association, and the Astronaut Scholarship Foundation, among others. He has been honored with awards including the Presidential Medal of Freedom, the Congressional Space Medal of Honor, two Navy Distinguished Flying Crosses, the Laureate of the Order of Lincoln (Illinois’ highest honor), and the University of Wisconsin–Madison Distinguished Alumni Award.
Lovell regularly gives talks about leadership and his experiences as a test pilot, astronaut and businessman. He lives in Illinois with his wife, Marilyn; they have four children, 11 grandchildren and three great-grandchildren.