For this graduate, memes became the start of something big 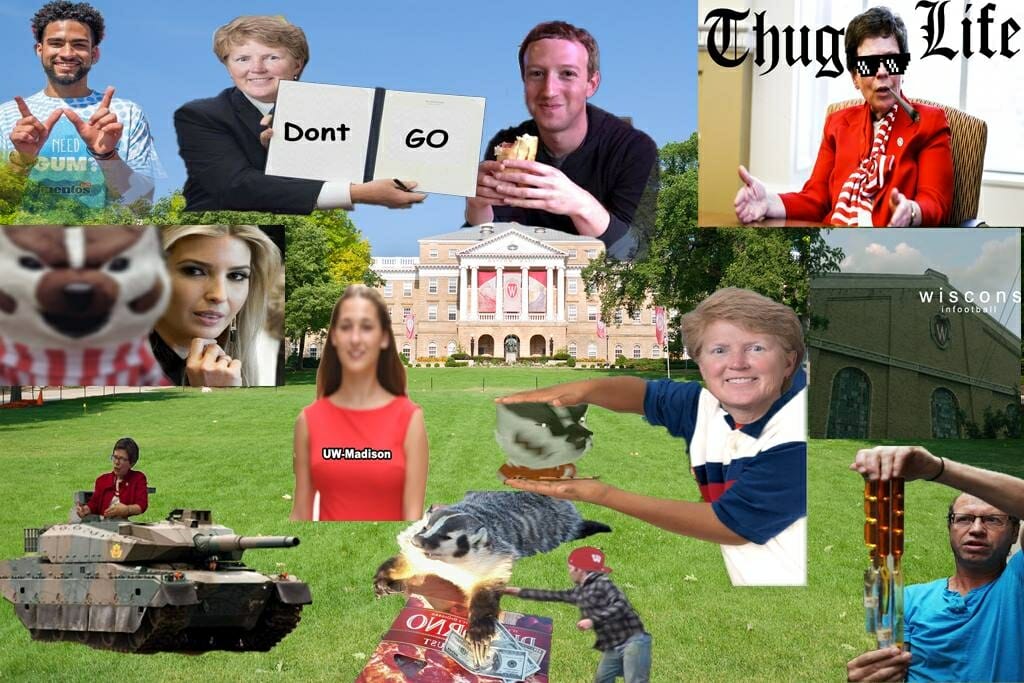 The cover photo from the Facebook page UW Memes for Milk-Chugging Teens features, among other things, Chancellor Blank atop a tank and a badger buying pizza.

There’s a long, proud and often ridiculous history of campus humor at UW–Madison, from century-old magazines like The Sphinx and The Octopus to the pink flamingoes that materialized on Bascom Hill in 1979 and America’s finest news source, The Onion, which was founded by students in 1988.

And now, there’s UW Memes for Milk-Chugging Teens, a Facebook group with nearly 14,000 members and its own theme song, complete with a video of a surfing cow. 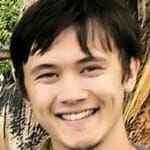 Then-junior Shane Linden launched the group just before finals in May 2017, because what better way to avoid studying than by posting jokes about avoiding studying? He kept the ground rules simple: “Unpretentious, state school memes for Badgers and other UW students *Keep it UW–Madison related* No links to your dumb clickbait article.” And above all, keep it original – don’t just repost something somebody else made.

A year later, the page has become a rapid-fire broadcaster of all manner of campus humor, celebrating the travails (failing a test, cramming onto the 80 bus) and triumphs (comedian Steve Carell is touring campus with his daughter!) of daily life at UW. And Linden, who graduates May 12, has grown used to answering the question, “Are you the Shane Linden?” 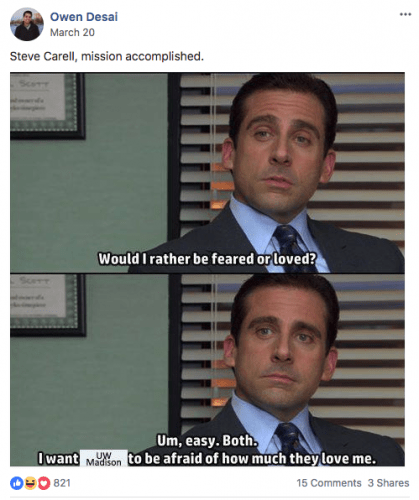 Not that it’s a one-person effort. Speaking over dinner at QQ’s Express, the Chinese restaurant that’s generated countless love-it-or-hate-it memes, Linden describes the group as an ongoing conversation. He and his fellow moderators can step in if it veers badly off course, but their approach generally is to be hands off and let the community govern itself. That’s worked pretty well, which can’t be said for many online environments.

“I do think the best kind of culture comes organically, from the bottom up,” he says.

The range of topics is vast. Organic chemistry. A duck wandering into the Union. The best and worst campus bathrooms. The proper way to consume the dumplings known as pelmeni. (“Eating them with a spoon is a disgraceful and dishonorable act,” commented a student from Russia. “Pelmeni are not to be dipped in sour cream, they are to be gently but thoroughly coated in it.”)

Linden appreciates the humor of prior generations of Badgers but thinks the meme page offers something unique. “I don’t think anything has been as egalitarian as the page. There is no barrier to entry at all. … It’s just completely open to everyone.”

One of Linden’s three majors is philosophy (The others: Chinese and political science. He makes dean’s lists as well as memes). He commented to a campus newspaper that the meme page “is the agora of our time.” That line promptly become a meme.

“It was half in jest but I do think it holds,” he says. The openness of the forum also allows the humor to evolve at a startling rate, as group members comment on and repurpose posts. “It’s like 100 people building a wall … And it happens so quick. I’ve heard people say the meme page is how they get news about things that happen on campus.”

Somewhat to his surprise, students have used the page to debate serious issues – a controversial change to the dining plan, political diversity or lack thereof on campus, the value of student government. In response to the latter, the student government chair, Katrina Morrison, posted a meme of herself hurling a shovel at the critics. 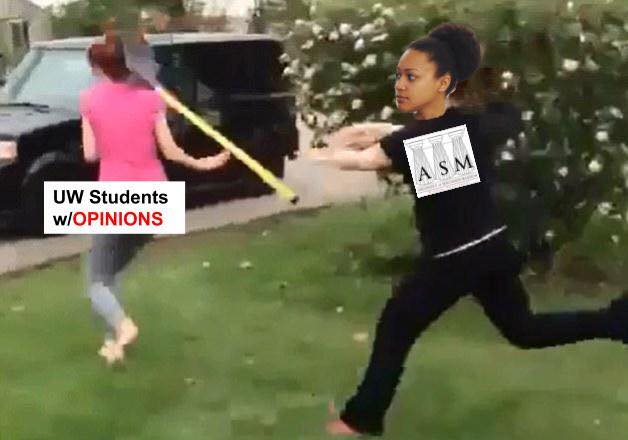 “It was so funny! Using the platform to her full advantage,” Linden says admiringly. “That’s what I hope can come out of these sorts of discussions.”

Linden himself used the page for a campaign dear to his heart: a petition urging Culver’s to open a restaurant on State Street. It got an outpouring of support and Linden emailed Culver’s chief executive, who invited him to company headquarters. Linden got a tour of HQ and a free T-shirt but no commitment for a campus eatery. He had struck out.

Then, a few months later, he saw a job posting for a public relations company in San Francisco. They were looking for good storytellers. Intrigued, he applied. In an interview, they asked him to talk about a time he’d failed, and he told them the Culver’s story. He got the job.

So he’s handing the page off to his fellow moderators – all of whom he met online when they started posted funny stuff – and trusting them to keep the humor going.

“It’s become such a big thing, much bigger than me or anything I hoped it would become,” he says. “Hopefully it becomes another institution, like the (Daily) Cardinal, the Madison Misnomer – people constantly passing it down. That’s all I can hope for.”