Research performed in the Ethiopian highlands shows that even in years with above average rainfall, crops can be severely reduced by drought early in the growing season, when seeds must sprout and get established. 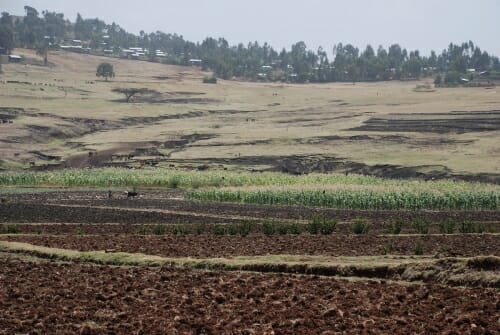 Much of the Ethiopian highlands are blanketed in rich soils, but sloping land combined with an intense rainy season can cause widespread erosion. The crop in the center is probably sorghum. Photo: Michael Eggen

A study by University of Wisconsin–Madison scientists Michael Eggen and Mutlu Ozdogan, now online at Environmental Research Letters, looked at yields of sorghum, a crop related to corn that is prized for its drought resistance.

The study showed a paradoxical result: Even though climate change “will bring generally warmer and wetter seasons to the study area,” the report said, droughts early in the growing season “will likely have negative impacts on sorghum yield.”

That phenomenon is already visible in the years with a strong El Niño, the thermal cycle in the Pacific Ocean that affects weather worldwide. As the climate as a whole warms, these droughts are likely to become both more common and more intense in Ethiopia’s highlands.

The study had its roots in conversations that Eggen had in 2015 while working on a larger project on the relationship of agriculture to environment and climate in Ethiopia, a project led by Ozdogan, an associate professor of forest and wildlife ecology at UW–Madison. 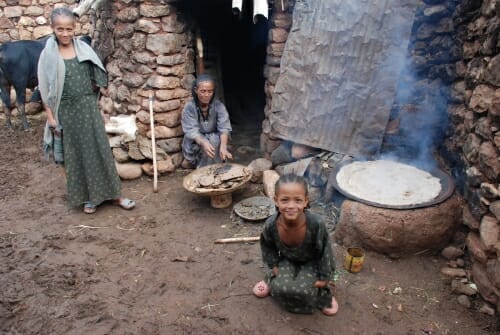 Sorghum is rotated in the field with the indigenous grain tef. Tef is the favored grain for making injera, the local flatbread, seen here being cooked on wood-fired stove. Photo: Michael Eggen

“I lucked out,” says Eggen. “This was right after the strong El Niño of 2015. I was talking with farmers about the last couple of seasons, without intending to focus on extreme weather, but they all told me that 2015 was the worst year ever, worse than the major famines of 1983 and 1998. ‘We have never seen sorghum fail at this scale,’ they told me.”

Sorghum is renowned in the area as a drought-resistant, subsistence crop, Eggen notes, “so when sorghum fails, it’s bad for everyone.” Eggen, who has now been working in Ethiopia for about 12 years and speaks “passable” Amharic, says sorghum is used for food, animal feed and brewing beer.

“The farmers told us that the failure was because the rains had not come early in the growing season and the seedlings died or did not even emerge,” Eggen says. 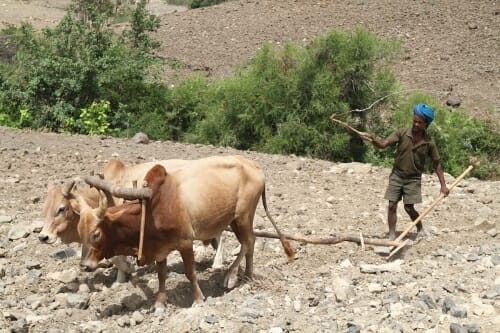 While examining climate records, Eggen and Ozdogan noted that the El Niño years generally had below average rainfall during the growing season, much like the forecasts for climate change — which also indicate that El Niños will become either more frequent, more intense, or both.

In the study, the impact of El Niño today served as a stand-in for a projected 3 to 4 degree Celsius increase in temperature later in the century, Eggen says, but El Niños will not disappear as warming continues. “Down the line, we have two synergistic factors: the intensified El Niño, and the substantial warming. Either can cause catastrophic sorghum failure, and both of them together are much more likely to cause those failures — even before the full 3 to 4 degrees of warming is evident.”

“… if the new climate includes drought during the critical early weeks of the growing season, the result will be more crop failures, possibly famine.”

Although crop yield projections based on changes in average temperature and rainfall generally forecast more declines in tropical rather than temperate regions, portions of the Ethiopian Highlands have been expected to see the opposite trend, Eggen and Ozdogan explain. In that region, a warming climate with bountiful rains at high elevation might increase yields.

But that is not what the researchers found, based on using El Niño as a harbinger of a warming future. “We confidently expect hotter temperatures, and more total rainfall,” says Eggen. “But if the new climate includes drought during the critical early weeks of the growing season, the result will be more crop failures, possibly famine.”