Amid changing market for scientific instruments, Gilson continues to lead 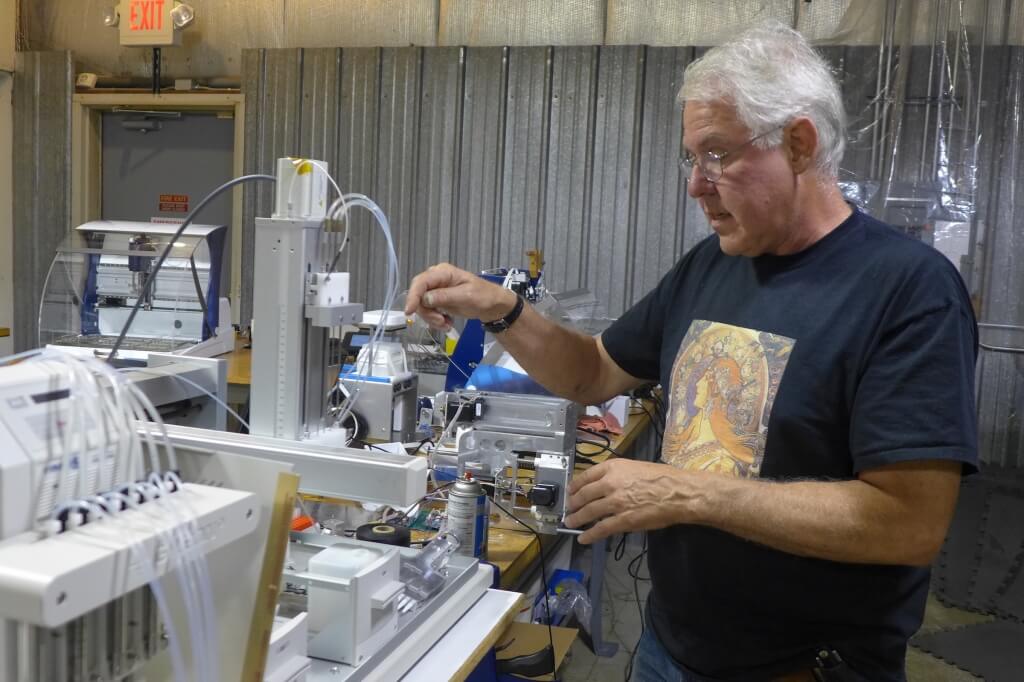 Innovations from Gilson, a Wisconsin firm started in the 1940s by a UW–Madison doctor who built instruments for his own research, are still selling in labs around the world.

“We may be the oldest biomedical startup from UW–Madison,” says Robert (Bob) Gilson, the current president. “My father, Warren Gilson, was a neurologist who made an electro-encephalograph [EEG] for his own use in the basement of the University of Wisconsin Hospital. It was better than what was commercially available, so other people in the Medical School asked, ‘Can you make one for me?'”

Today, Gilson has 115 employees in Middleton and a total of 550 worldwide. Bob and his daughter, vice president of sales Molly Gilson, bridge the company’s past and future; Molly’s brother, Daniel Gilson, also works for the company as an engineer. Warren, Bob and Daniel Gilson all received degrees from UW–Madison.

From its Middleton headquarters, Gilson makes its mark by anticipating the needs of a wide range of scientists, says Bob. “We sell to pharmaceutical companies for drug discovery, to government customers, the CDC (Centers for Disease Control) and NIH (National Institutes of Health), manufacturers and basic researchers at universities. It depends on the product.”

“There has been an evolution of our product portfolio,” says Molly. “Many years ago, we deliberately moved away from medical devices that have direct contact with patients.”

Father and daughter finish each other’s sentences. They don’t always agree, but seem ever agreeable.

We try to make instruments that make it harder to make mistakes.

Gilson excels in several areas. One of the company’s lines is liquid chromatography, instruments that detect minute chemical concentrations. A second product line performs solid-phase extraction, in which samples are absorbed onto a solid substance, then extracted in a liquid for analysis.

A third field of expertise is liquid-handling robots. Medical and biological labs study an enormous range of samples and compounds and speed their work using dishes containing at least 96 wells. Gilson’s robots can efficiently transfer tiny samples of liquids into those dishes.

One star of Gilson’s lineup is entirely manual, however: Pipetman pipettes.

Pipettes are hand-held liquid dispensers found in virtually every “wet” biology lab, but Pipetman was almost stillborn. Warren Gilson had borrowed parts from an existing Gilson product to design the first pipette with variable output, but Bob says that when he shopped it around UW Hospital, “no one was particularly enthused, so Father put it in a cigar box on his desk.”

In the late 1960s, a UW–Madison engineering undergraduate named Eric Marteau d’Autry asked to work on the invention. Marteau d’Autry went home to France, developed the market, and for many years directed the Pipetman subsidiary Gilson still operates in France.

Pipetman is “a bread-and-butter product,” says Molly. “I routinely see 30-year-old pipettes that are still going strong, even though generations of undergrads have dropped them.”

All of Gilson’s instruments are made in Middleton, where the company hews to the philosophy that if you want it done right, do it yourself.

“We try to make instruments that make it harder to make mistakes,” Bob says.

Gilson is one of the smaller players in scientific electronics, but one advantage it has over giants like GE and Agilent is “the mentality and the skill set to offer custom solutions where the bigger players don’t want to play,” Bob says.

Being privately held is an asset, says Molly. “Bob is good with money — he’s going home today to fix his own washing machine. That has enabled us to make long term decisions, as opposed to, ‘It’s almost the end of the quarter; better quick discount our product to try meet the numbers.'”

Designing instruments for scientists is as fluid as science itself, Bob says. “We turn over our product line every three to four years. The areas and methods of research change that often. Are people still looking at spider venom, or have they shifted to gut bacteria?”

The nature of Gilson’s products has also changed, he adds. “Before, we made individual modules with individual functions. Today, scientists want a total solution that does just what they need.”

Figuring out what scientists need has been instrumental to Gilson’s success since the beginning. As Bob remembers, when both he and Gilson Medical Electronics were young, “on Sunday my father would go to University Hospital and eat in the cafeteria. [Biochemists] Hector DeLuca and Henry Lardy would be there, and they would all sit and talk, bounce ideas off each other.”

“Some of our most successful products, and most innovative, have sprung not from a market study, but from a scientist who was blocked and said, ‘I need something that can do the work.'”