Since highly versatile human stem cells were discovered at the University of Wisconsin–Madison nearly 20 years ago, their path to the market and clinic has been slowed by a range of complications.

Both embryonic stem cells and induced pluripotent stem cells are valued for their ability to form any cell in the body.

This week, a UW–Madison team reports in Nature Biomedical Engineering that they have jumped a major hurdle on the path toward wider use of stem cells.  Using an automated screening test that they devised, William Murphy, a professor of biomedical engineering, and colleagues Eric Nguyen and William Daly have invented an all-chemical replacement for  the confusing, even dangerous materials, now used to grow these delicate cells.

“We set out to create a simple, completely synthetic material that would support stem cells without the issues of unintended effects and lack of reproducibility,” Murphy says.

Stem cells respond to chemical signals that trigger their development into specialized cells in the brain, muscles and blood vessels. In the lab, researchers use a “substrate” material that anchors the cells in place and allows the necessary signaling. Matrigel, currently the most popular of these substrates, is a complex stew derived from mouse tumors. “Matrigel can be a very powerful material, as it includes more than 1,500 different proteins,” says Murphy, “and these can influence cell behavior in a huge variety of ways. Matrigel has been used as a Swiss army knife for growing cells and assembling tissues, but there are substantial issues with reproducibility because it’s such a complex material.” 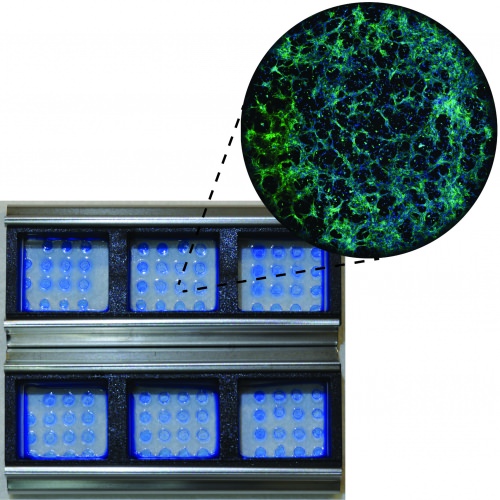 In the lab of William Murphy at UW–Madison, these six experimental samples are substrates that were evaluated for their ability to support stem cells. The samples, each 1 millimeter in diameter, and contain subtle chemical and physical variations, affecting such factors as hardness, speed of breakdown, and points for cellular attachment. Inset shows a network of blood vessels generated for the new Nature Biomedical Engineering paper, based on stem cells that grew on one particular substrate. Credit: William Daly, Eric Nguyen and Mike Schwartz, UW–Madison

And given its biological origin, Matrigel can carry pathogens or other hazards.

In an advance that has already been granted two U.S. patents, Murphy’s group has developed new substrates for:

To find an improved chemistry that would hold and support stem cells as they change into specialized cells, Murphy used robotic instruments to squirt arrays of more than 100 materials on a glass slide. “We developed a process that allowed us to test an array of materials — each one slightly different in terms of stiffness or ability to attach to stem cells — on a single slide,” he says. “It was automated, using a liquid-handling robot, and we could screen hundreds of materials in a month; which we can now do in a week.”

In the “olden days,” Murphy says, each experiment would only be able to screen about 10 materials, which means that their current weekly screen would have taken years.

A UW–Madison spinoff called Stem Pharm has licensed patents for the materials from the Wisconsin Alumni Research Foundation and is starting to sell the system to pharmaceutical companies and scientific institutes, says Murphy, who is Stem Pharm’s co-founder and chief science officer. “Increasingly, pharmas are externalizing innovation, because internally they don’t have as much capacity to innovate as before,” Murphy says. “A number of companies have expressed a strong interest in moving away from Matrigel, and our vascular screening product has already been successfully beta tested at multiple locations.”

Finding a better growth substrate for stem cells may seem less sexy than identifying the cells in the first place, but it’s one of the roadblocks that must be cleared so these ultra-flexible cells can realize their potential, says Murphy, who is co-director of UW–Madison’s Stem Cell and Regenerative Medicine Center. “The next step in delivering on the promise of human stem cells involves more effectively manufacturing the cells themselves, and the tissues they create. We have shown that simple materials can serve as the chisels and hammers of stem cell manufacturing.”