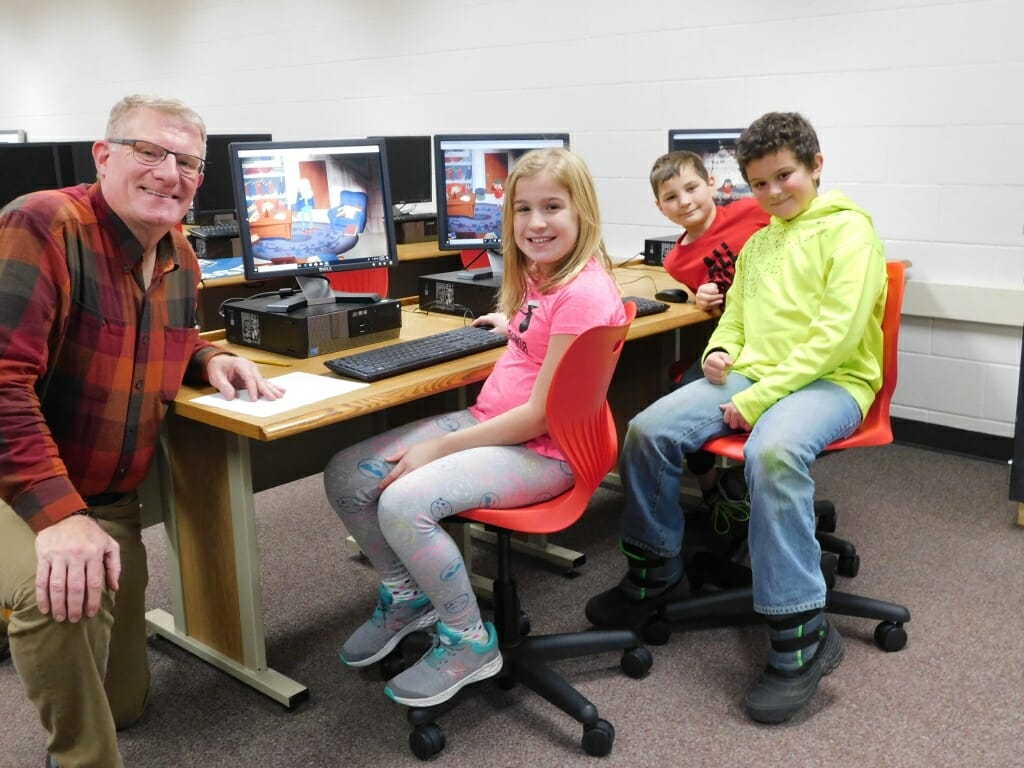 History can be a challenging subject to study, with so many names, dates and places to remember.

But thanks to a new educational video game — “Jo Wilder and the Capitol Case” — created by UW–Madison’s Field Day Lab and Wisconsin Public Television (WPT), learning about history, specifically Wisconsin history, is “really cool,” says Camren Hokanson, a fourth-grader at Elmwood Elementary School in Elmwood who has played the game multiple times.

His classmate, Payton Bleskacek, confesses, “If I didn’t play this game, I wouldn’t have been into history.” 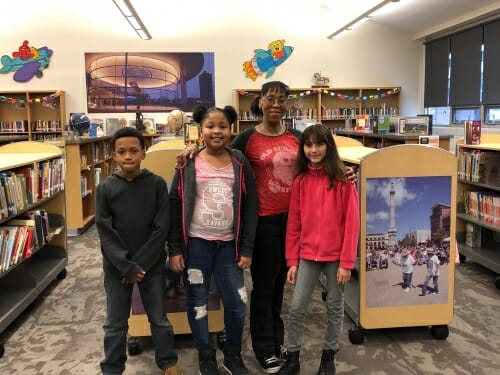 Their teacher, George Klink, helped bring the video game to life as one of 30 teachers invited to UW‒Madison in 2017 to brainstorm on the game concept and help develop a prototype. “It was an exciting opportunity,” and the timing was perfect, he recalls about the fellowship. “The game designers wanted to promote Wisconsin history with students in third through fifth grade and that’s what I wanted to do in the classroom, too.”

The video game, developed to commemorate the 100-year anniversary of Wisconsin’s state Capitol, is now available to play, free of charge, on WPT’s education website. The storyline revolves around a young girl named Jo Wilder and her adventures in and around the Capitol as she tries to solve the mystery behind several historical state artifacts. Somewhere along the way, her pet badger, Teddy, goes missing, creating a playful and engaging sub-plot. 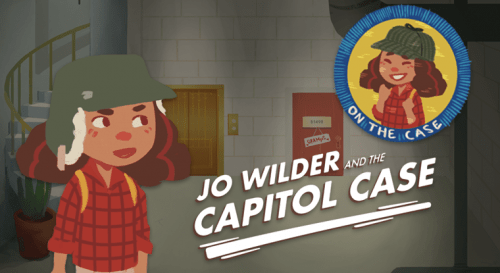 A screen shot of the game.

According to Abby Krings, another Elmwood Elementary fourth-grader, the badger storyline was the best part about the game.

“Jo was searching for Teddy on a lot of floors and found him in the last place she looked,” a spoiler we will not disclose out of courtesy to those who have not yet played the game.

Nine-year-old Krings says she loved the game because it was “really educational and most kids play games that don’t teach you about anything.”

David Gagnon, director of Field Day Lab at the Wisconsin Center for Education Research, part of the university’s School of Education, hopes that teachers will use “Jo Wilder and the Capitol Case” in their classrooms as an introduction to the idea of historical inquiry.

“We are not trying to replace any curriculum with video games directly. Games are just part of the puzzle,” he explains, “and have a unique ability to allow learners to act and try out their ideas in a realistic context.”

Library media teacher VaLisa Harmon often uses videos as a teaching tool at Wadewitz Elementary in Racine, where she also oversees the production of the school news show.

“I actually make videos with my students to showcase information that is interesting to them. We just created one about bats and pumpkins,” says Harmon, part of the cohort of educators invited by Field Day to concept the “Jo Wilder” video game. Harmon, a self-proclaimed history buff, likes that the game challenges her students intellectually. “So much of what the kids play these days is click here, click there, win a thousand points. The ‘Capitol Case’ game makes them think, and I like that.”

Harmon and her students also learned some little-known facts about Wisconsin from the game’s protagonist, Jo Wilder. “Did you know that the first Earth Day was celebrated in Wisconsin?” she asks. “When my students learned about all the stuff Wisconsin is known for, they said, ‘Wow! Wisconsin sure has a lot of firsts!’”

Before the game was officially released on Oct. 10, about 600 kids from 17 schools throughout the state play-tested it in classrooms. Their feedback was critical to shaping the final product, says Field Day’s director.

“The kids were the final judge of what stayed and what went,” and they are the reason why Teddy, the badger, became such a big part of the story. Gagnon happily reports that engagement with the game was very high.

“Even kids who had a hard time reading loved interacting with it.”This video directed at teachers emphasizes the game can be used to meet state learning standards while making learning about history fun. The game can be played free on WPT’s education website.

Gagnon says the video game is “just the invitation” to larger, open-ended inquiry projects. In the next year, Field Day plans to “scaffold” the experience by having kids who have played the game invent their own historical inquiry project about local history. “So all the principles of the game―how you track down evidence, how you corroborate evidence, how you find experts to interview, how you find primary sources―we want those things to transfer into how kids interact with their own neighborhoods and communities.”

The game brings to life a celebrated philosophy from the University of Wisconsin’s own history, the Wisconsin Idea, which declares that every family in the state benefit from the university’s teaching and research. UW–Madison and WPT worked closely with the Wisconsin Department of Public Instruction and Wisconsin Historical Society to make sure “Jo Wilder and the Capitol Case” helps students learn, and teachers teach, across the state.

“I am glad for the friends and teachers we knew around the state who collaborated with us, and the new people who became part of our network through this project,” says Alyssa Tsagong, WPT’s director of education. “I think the game is beautiful and I am proud of the process we went through.”

Boyd Roessler is an alum of UW─Madison’s School of Education who teaches math, science and social studies at Hillcrest School in Waukesha. He opted to join the cohort of game creators because he was impressed by WPT’s commitment to educational activities and outreach, and intrigued by Field Day’s inquiry approach.

“What I was most excited about was that they wanted to teach the process of historical inquiry through the game, and I always try to teach social studies through an inquiry process, where students ask questions, gather evidence and make predictions.” He says it’s not the easiest way to teach, but it is the most engaging.

Through the Field Day game fellowship, Roessler found his flock. “It was very rewarding to work with other third-, fourth- and fifth-grade teachers throughout the state who have the same teaching philosophy and share my interests and goals.”

In the end, teachers improved their teaching, missing badgers came home and the Wisconsin Idea lives on.