For an illness like cancer, doctors in search of definitive diagnosis often turn to computed tomography (CT) scans based on reconstructing a three-dimensional image of an organ from multiple two-dimensional image slices.

At the molecular level, such 3-D scans could become an important part of precision medicine: a future of tailoring treatment decisions to each patient’s unique cellular features. But translating the idea of CT scans from full-sized hearts or brains to minuscule molecules is far from trivial — which is why Paul Campagnola, professor of biomedical engineering and medical physics at the University of Wisconsin–Madison, has made a career out of it. 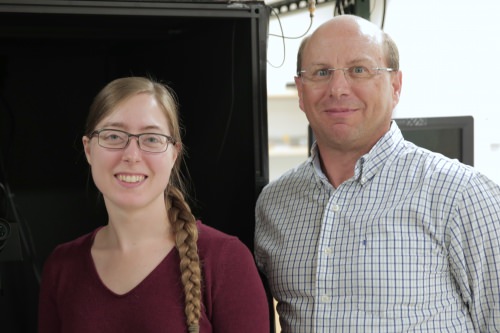 Campagnola has taken a crucial step toward creating 3-D images of collagen — the most abundant protein in humans, found in all of our bones, tendons and connective tissues — on a molecular scale.

“Collagen is essential for bone and tissue stability, and changes in its intrinsic 3-D organization are a key feature of all cancers and several other diseases,” says Campagnola, whose work was published this month in the journal Optica. “That’s why detailed images of these changes could become an important part of clinical treatment decisions in the future.”

What makes collagen imaging so tricky? A traditional optical microscope depicts differences, or contrasts, between lighter and darker objects because they absorb different wavelengths of the light that shines through them. But since collagen molecules are transparent, they don’t generate those contrasts.

Special techniques are available to image transparent objects, but in the case of collagen, Campagnola and other researchers demonstrated in the late 1990s that higher-resolution 2-D images result from exploiting its rigid and hierarchical structure: Individual collagen molecules are stacked together like a brick wall into collagen fibrils, which are packed side-by-side into parallel bundles called collagen fibers. It is this structure that gives collagen-based body parts their almost steel-like stability.

And while such a highly organized transparent structure does not change light’s primary frequency, it interacts with its so-called “second harmonic” frequency. In music, the second harmonic of a sound wave has twice the frequency and half the wavelength of the original, creating a sound one octave higher. 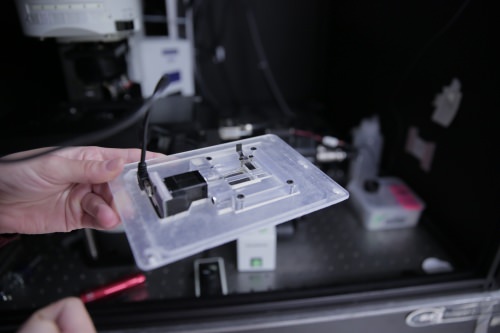 A 3-D-printed device for imaging collagen samples holds a motor (left) that spins the tube containing the sample. The device sits on the stage of an upright microscope while a laser source below the stage creates 2-D images of the collagen. Photo: Renee Meiller

“Collagen is the most common human tissue type whose interaction with a laser creates a new, unique signal that we call second harmonic light, analogous to music’s second harmonic sound,” Campagnola explains. “Unlike other materials, collagen’s molecules assemble in such a way that this light is bright and can distinguish between different substructures.”

Second harmonic generation microscopy was born when researchers learned how to convert these higher-order signals into 2-D images, but 3-D images remained elusive for a few more years.

With its new study, Campagnola’s group has now provided the experimental and computational framework for assembling 2-D collagen images, taken from multiple angles around the tissue sample, into a moderate-resolution 3-D view. The process — published with Kevin Eliceiri, director of the Morgridge Institute for Research’s 3-D printing facility, and Kirby Campbell, who recently completed his doctorate in biomedical engineering at UW–Madison and is now a postdoctoral fellow at the St. Jude Children’s Research Hospital in Tennessee — is similar to the familiar CT scan of human organs.

Key to this new imaging paradigm is a 3-D-printed device that holds a tube attached to a small motor and sits on the stage of an upright microscope. Once a tissue sample (say, a mouse tail tendon) is placed into the tube, the motor starts to spin it. Every time a laser source, located below the stage, sends light through the rotating sample, a laser scanner records the resulting 2-D microscope image. At the end of the procedure, a complex mathematical algorithm reconstructs a 3-D image — a first step toward second harmonic generation tomography — from the collected 2-D images.

Once deployed in clinical settings, high-resolution 3-D collagen tomography may home in, for example, on subtle differences between highly aligned collagen fibers in breast and ovarian cancer tissue, which are distinct from the cross-hatched mesh of collagen found in normal tissue. These images may inform treatment decisions not only for cancer, but also for pulmonary fibrosis, a condition in which damaged and scarred lung tissue reduces a patient’s ability to breathe.

“Our next goal is to apply the new technology to a variety of diseased tissues,” Campagnola says. “If we can build a large enough patient database with both images and clinical outcomes, physicians can eventually choose chemotherapy or other treatments based on the 3-D collagen structure in a patient’s own tissue — which is the kind of precision medicine that can really make a difference in treatment success.”