Ongoing studies of a massive volcanic field in the Andes mountains show that the rapid uplift which has raised the surface more than six feet in eight years has occurred many times during the past 10,000 years.

A clearly defined ancient lakeshore that is about 600 feet above the current lake level must have been horizontal when it formed about 100 centuries ago. Since then, the southern end of the shoreline has risen 220 feet, or about 20 stories, says Brad Singer, a professor of geoscience at the University of Wisconsin–Madison. The finding, he says, “extends the current deformation behavior well into the geologic past. The shoreline appears to record a similar behavior to what we are seeing today, but over 10,000 years.” 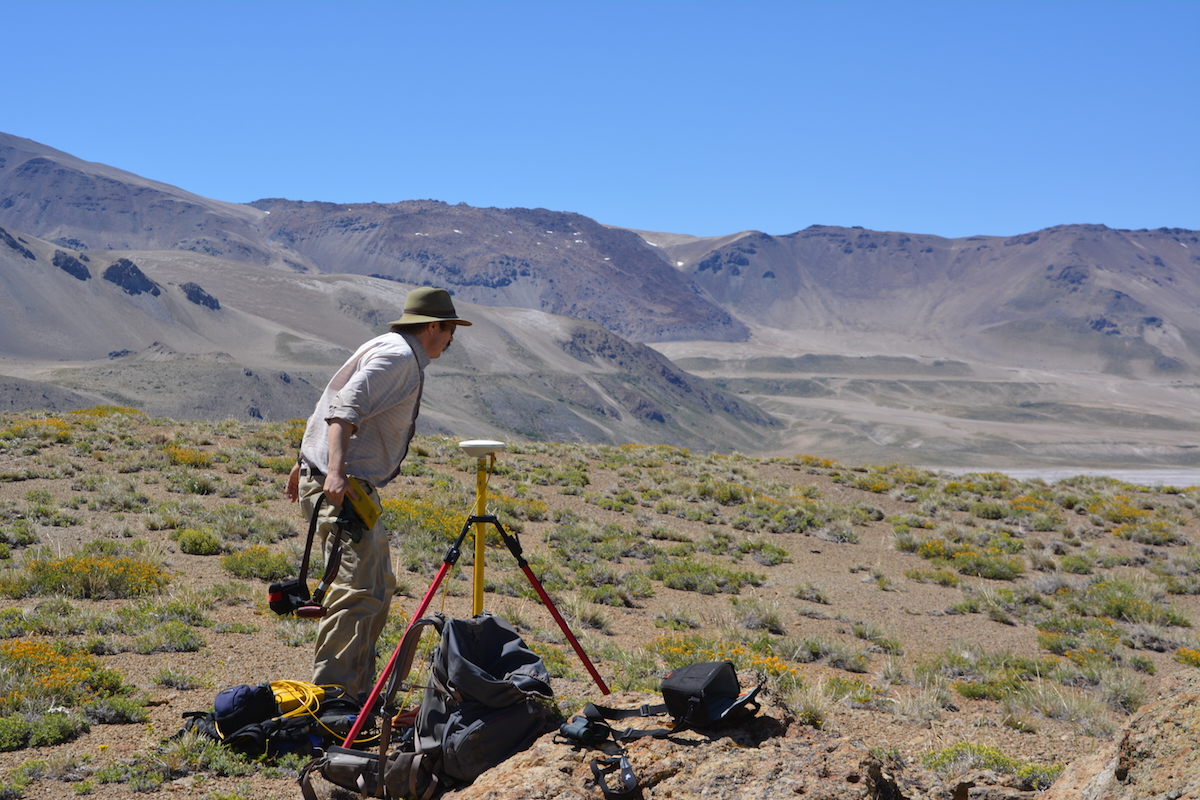 The volcanic field is known as Laguna del Maule. The dramatic finding rested on a simple, painstaking study of the ancient lakeshore, which resembles a bathtub ring. Singer and colleagues traveled along the shoreline on foot, and precisely recorded its altitude with a GPS receiver.

The most likely cause of the sustained rise is the long-term intrusion of molten rock beneath the lake, says Singer, who has spent more than 20 years studying volcanoes in Chile. “I was shocked that we measured this much rise. This requires the intrusion of a Half Dome’s worth of magma in 10,000 years.”

I was shocked that we measured this much rise.

Half Dome, an iconic granite massif at Yosemite National Park in California, has a volume of about 1.5 cubic miles. Half Dome and similar structures form when molten rock — magma — cools and solidifies underground, and then the rock body is pushed upward over the eons.

The modern uplift at Maule is what convinced Singer to organize a large-scale scientific campaign to explore a dangerous, highly eruptive region. “I am not aware of magma-drive uplift at these rates, anywhere, over either of these time periods,” he says.

Singer is leading a five-year National Science Foundation-funded investigation of Laguna del Maule that involves 30 scientists from the United States, Chile, Canada, Argentina and Singapore. At least 36 eruptions have occurred there during the past 20,000 years. 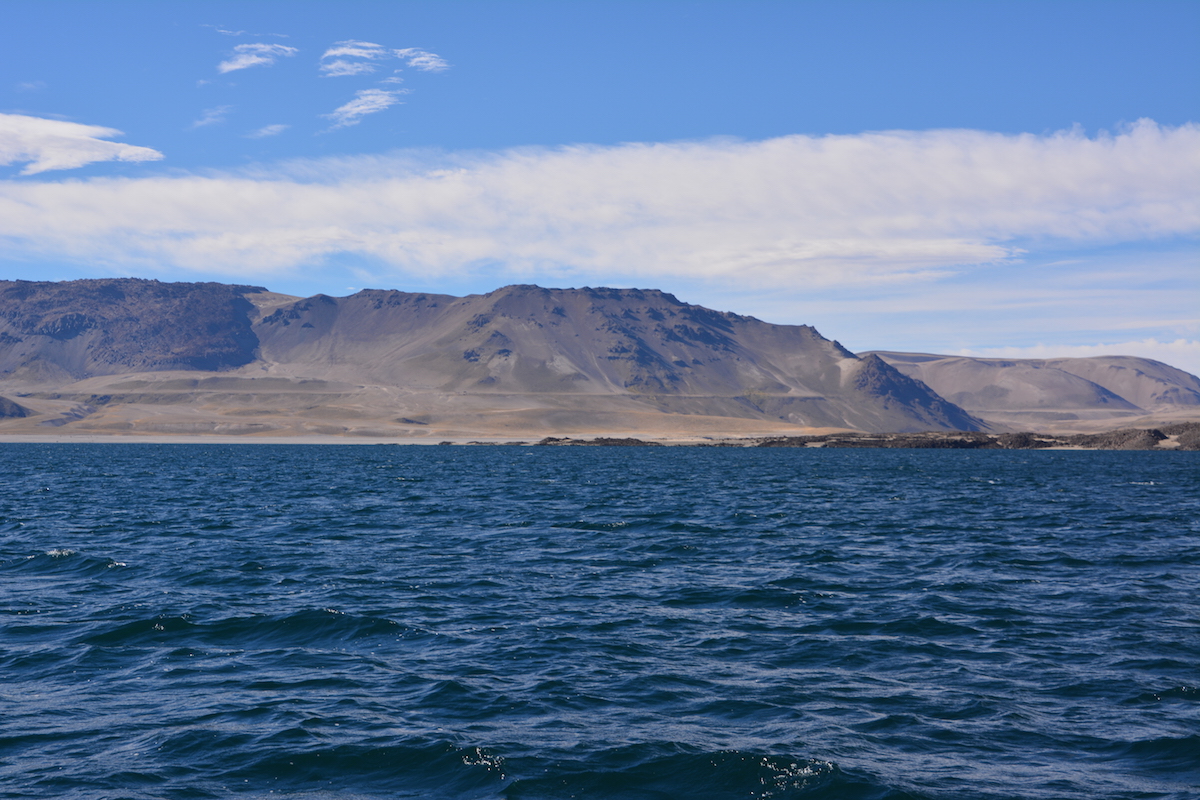 The shoreline at Laguna del Maule in Chile was horizontal about 10,000 years ago. Now, the south end of the lake is 220 feet higher than the north, indicating a long-term uplift probably caused by the intrusion of magma under the lake. Brad Singer

The researchers presented the new data on the uplift during the last 10,000 years on Dec. 16, at the annual American Geophysical Union meeting in San Francisco.

Laguna del Maule may cast light on the current — but much slower — uplift at the Yellowstone caldera in Wyoming and at Long Valley in California.  “These volcanoes have produced super-eruptions spewing hundreds of cubic kilometers of volcanic ash, but the uplift and deformation today are far slower than what we see at the much younger Laguna del Maule volcanic field,” Singer says.

Laguna del Maule may cast light on the current — but much slower — uplift at the Yellowstone caldera in Wyoming and at Long Valley in California.

The lake basin at Maule, measuring roughly 14 by 17 miles, is dominated by massive, repeated lava flows. But the full influence of Maule’s volcanoes extends much farther, Singer says. “The impressive lava flows we see in the lake basin are only a fraction of the record of eruptions. Downwind, in Argentina, deposits of volcanic ash and pumice show that the system’s footprint is many times larger than what appears at the lake.” Understanding the real hazards of Laguna del Maule must consider the downwind impacts of the explosive eruptions, he adds.

Chile has seen remarkable geologic activity in recent years. In 2010, the fifth-largest earthquake ever recorded on a seismometer occurred 120 miles west of Laguna del Maule.

In the past 12 months alone, Calbuco, Villarica and Copahue volcanoes have erupted. 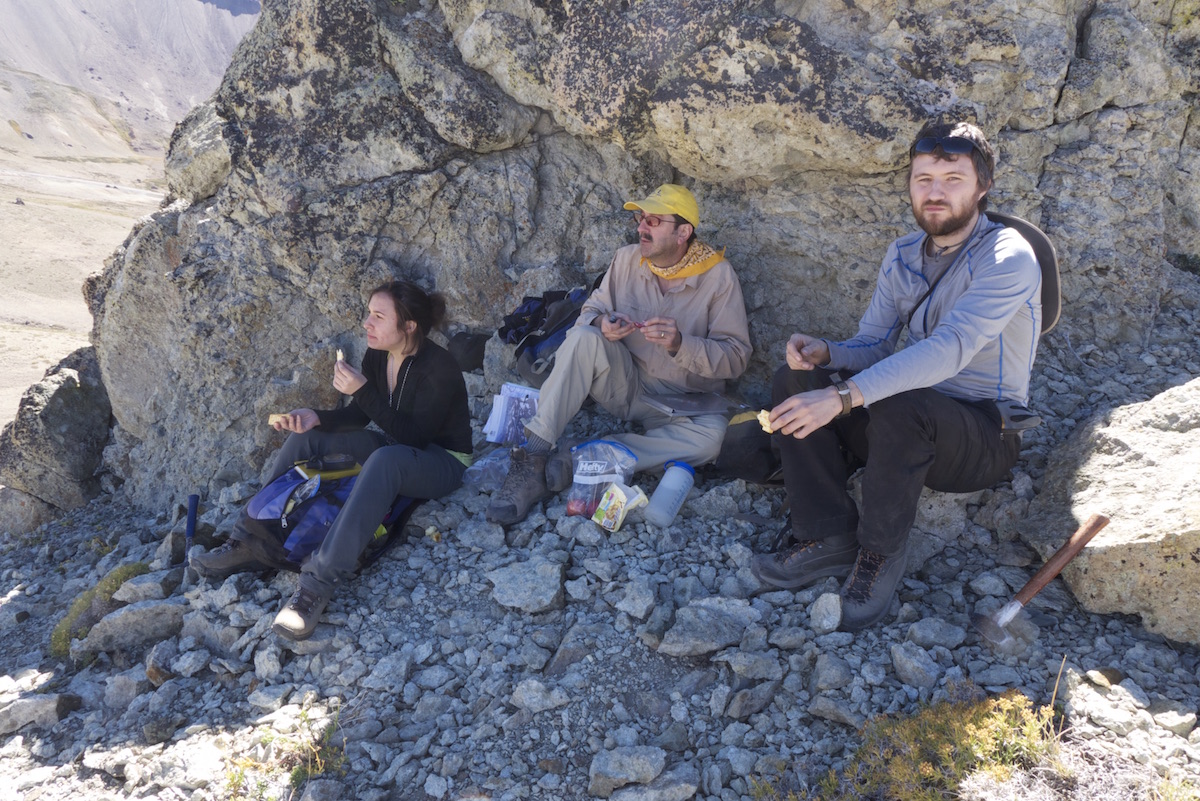 Brad Singer, center, stops for lunch with students Erin Birsic, left, and Nathan Andersen. The trio were collecting rocks that they will date to document the timing of the many lava flows at Laguna del Maule. David Tenenbaum, 2013

In the United States, eruptions are often compared to the one at Mount St. Helens in 1980, which released about 1 cubic kilometer of rock. One of the 36 Laguna del Maule eruptions nearly 20,000 years ago spewed 20 times that much ash.

Other nearby volcanoes have surpassed 100 cubic kilometers, entering the realm of the “super-volcano.”

The new results shed light on the force that has been “jacking up” this piece of earth’s crust, Singer says. “Some people have argued that the dramatic deformations like we are seeing today could be driven by the expansion of steam above the magma.” However, gravity measurements around the lake basin by Basil Tikoff of UW–Madison and Craig Miller and Glyn Williams-Jones of Simon Fraser University in Canada suggest that steam is unlikely to be the major cause of uplift. Only solidified magma can support 67 meters of uplift, Singer says: “Steam would leak out.”

The average interval between eruptions at Laguna del Maule over 20,000 years is 400 to 500 years, and the last eruption was more than 450 years ago, prior to Spanish colonization.

These findings “mean the current state of unrest is not the first,” Singer says. “The crust has gone up by more than my own height in less than 10 years, but it has done similar things throughout the last 10,000 years, and likely even longer. This uplift coincides with a flare-up of large eruptions around the southern end of the lake. Thus the most likely explanation is the sustained input of new magma underground, although some of it could be due to geologic faults.

“We are trying to determine the dimensions of the active system at depth, which will help us understand the hazard,” Singer adds, “but there is no way of knowing if the next eruption will be business as usual, or something outside of human experience.”