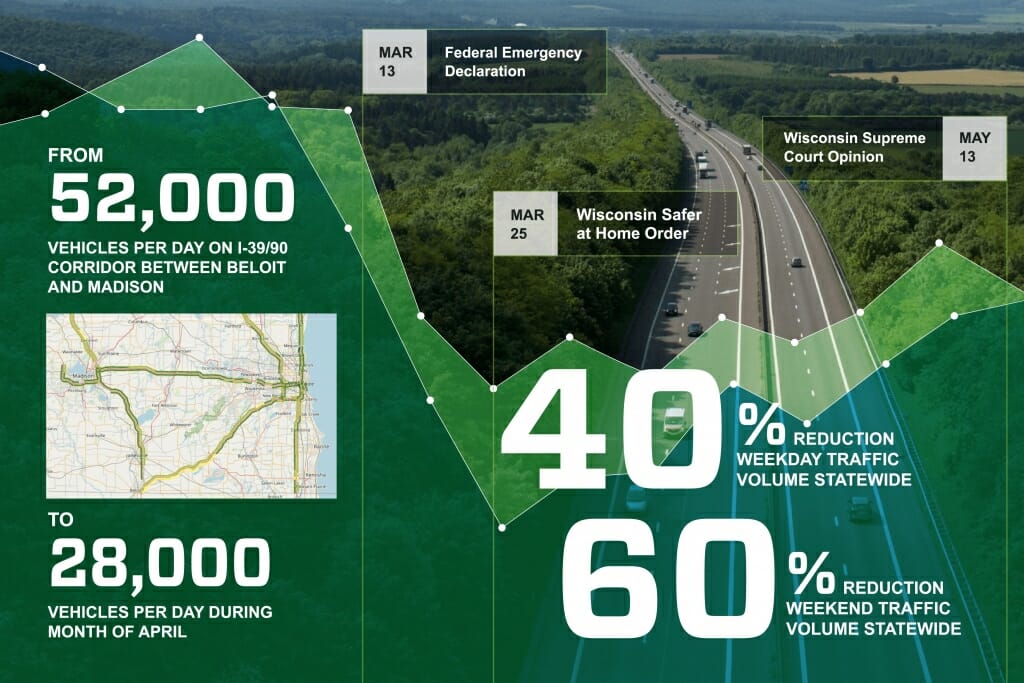 Traffic along Wisconsin’s highways had an unprecedented drop and remained well below normal in the weeks since Gov. Tony Evers’ Safer at Home order took effect March 25, giving traffic engineers an unusual perspective on highway travel.

The findings are the result of an ongoing traffic study at the University of Wisconsin–Madison’s Traffic Operations and Safety (TOPS) Laboratory in partnership with the Wisconsin Department of Transportation.

Interstate traffic volumes began to decline in the week leading up to the World Health Organization declaration of COVID-19 as a global pandemic on March 12, 2020, and a U.S. federal emergency declaration the next day. Interstate travel in Wisconsin bottomed out at a 40-percent reduction for weekday traffic and a 60-percent reduction for weekend traffic the week of March 25. TOPS Lab Director David Noyce, a UW–Madison professor of civil and environmental engineering, and researcher Jon Riehl say the traffic reduction is stunning. 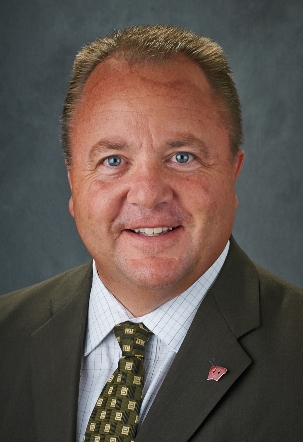 The data, which runs through May 7, suggests that Wisconsinites significantly altered their travel behavior due to the COVID-19 pandemic and the Safer at Home order.

“One of the things we struggle with in the traffic engineering field is managing traffic volume,” Noyce says. “There are many tactics, especially in large cities, to try to manage traffic flow and minimize congestion. It’s an issue that traffic engineers around the world have been fighting for a very long time — and people’s behavior during the pandemic has presented a unique opportunity for us to study how a change in social behavior can have such a big effect on traffic.”

Riehl says the pandemic’s unprecedented circumstances afforded an opportunity to study real-world traffic pattern shifts that are typically only theoretical.

While it’s not uncommon for events — such as traffic jams introduced by football games, major festivals or poor weather — to change traffic volumes, those shifts usually hamper highway performance. With the COVID-19 pandemic and Safer at Home order keeping thousands of motorists off the road, traffic engineers have had an exceptionally rare chance to observe patterns during a prolonged event that has, on the whole, improved highway performance.

“With the reduced traffic volumes, we can now more precisely understand different highway segments’ performance characteristics and compare this to the theoretical values used during highway planning and construction,” Riehl says. “Traffic data like this provides the opportunity to tune the empirical equations we use in highway design and to improve our performance models — which ultimately leads to improvement in highway design and traffic engineering.”

Early on, one of the sharpest traffic declines in the state came along the Interstate 39/90 corridor between the Illinois border at Beloit and the Madison beltline, U.S. Highway 12/18. The corridor typically averages roughly 52,000 total vehicles per day; however, the number fell to about 28,000 vehicles per day during the month of April — a 48% reduction in traffic volume.

Significant declines also occurred on highways across the state. Notably, Interstate 43 between Sheboygan and Green Bay saw weekday traffic volumes fall by up to 70 percent from pre-pandemic levels.

“You’d never see a drop like this on its own,” Riehl says. “Outside a major incident or construction event that would lead to a temporary reduction, there’s no other reason you’d see a drop of that magnitude other than a major external influence like the pandemic and the orders that came with it. You might see weekly drops based on events; some cities have smog days to try to reduce traffic, but volumes never go down anywhere close to that much. You might see a 10% reduction, but certainly not the percentages we observed in the last two months.”

Despite the drop in volume, traffic speeds on Wisconsin’s highways have remained relatively constant. Average speeds across the state’s highways fell by only about 1% since the Safer at Home order’s implementation, which does not represent any significant change from normal conditions.

Riehl says the most noticeable traffic changes have come in areas where congestion normally slows traffic below its “free-flow” speed, which is typically measured as the expected speed on an uncongested road. With fewer vehicles on the road, there’s less congestion, which allows traffic to move closer to its free-flow speed, even during rush periods.

“Speeds haven’t really changed all that much,” Riehl says. “People are driving as they normally do, and the only places speed goes up is where there’s less congestion. What we’re seeing is that during rush hour, speeds are returning to free-flow speeds because there’s not much congestion.”

Despite the dramatic initial drop, traffic volumes have slowly crept upward in the weeks since the Safer at Home order took effect. Even so, traffic remained lower overall on the state’s highways and interstates through the week of May 7, with weekday volumes about 20% lower and weekend volumes roughly 40% lower.

Noyce and Riehl will continue to monitor traffic to determine how the Wisconsin Supreme Court’s decision on May 13 to overturn Evers’ Safer at Home order — as well as orders eased at the local and county levels — will affect travel patterns.

Noyce says he expects the lower volumes to hold, even as restrictions lift, as people continue to work from home.

“If tomorrow we say the pandemic is over and everything goes back to normal, will we see an immediate and full recovery to the traffic volumes we saw before, or will we see a reduction that maintains?” Noyce says. “I think volumes will continue to rise, but it may take some time for volumes to return to where they were. A result of the rapid discovery of video conferencing and virtual communication in a telework environment may be a new traffic management tool reducing the number of daily trips.”

Additional figures and maps of traffic volume and speed data are available online on the TOPS Lab’s WisTransPortal System.