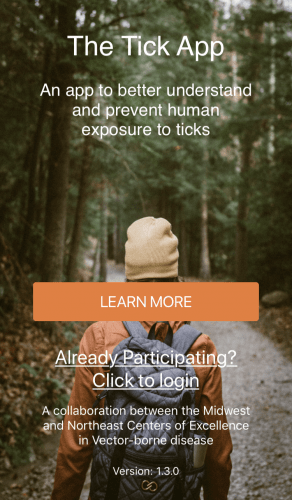 The Tick App is a research and educational tool designed to understand and then limit people’s exposure to disease-carrying ticks. Submitted photo

Researchers at the University of Wisconsin–Madison have developed a new smartphone app to help them understand where ticks are active and how people expose themselves to ticks.

The app is being released as Wisconsin faces an ever-increasing number of Lyme disease cases, sparking increased concerns about tick-transmitted diseases.

The app helps scientists better understand when and where ticks are picked up and educates people on what kinds of ticks to look out for and how to practice safe habits when venturing outside. It is now available on the Apple App Store and Google Play Store.

“We’d like to know what the risk factors for tick exposure are and see what habits expose certain people to ticks, and also get a sense of what prevents tick bites,” says Bieneke Bron, a postdoctoral researcher at UW–Madison who is leading the project. “Ultimately, we’d like to understand and prevent human exposure to ticks.”

Users are prompted to record a “tick diary” every evening for two weeks, in which they describe their activities for the day and whether or not they were exposed to ticks. Anonymized data collected from many users will help researchers track the threat of tick-borne diseases. 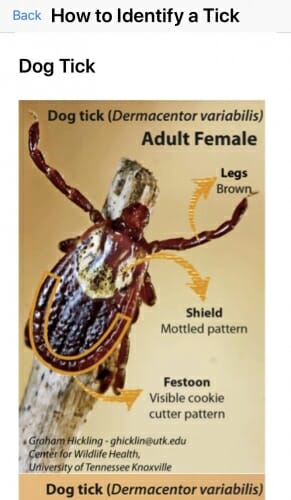 The app can also help users identify any ticks they run into with pictures and descriptions to understand their exposure to diseases. Submitted photo

The app was developed by the Midwest Center of Excellence for Vector-borne Disease in partnership with Columbia University and the Center for Health Enhancement Systems Studies, a UW–Madison research center that develops technology for health-related applications.

While the app is a research tool, it also teaches users tick identification, how to avoid being bitten, and how to safely remove ticks from skin.

Illnesses from tick bites in Wisconsin have tripled since 2004, according to the Centers for Disease Control and Prevention. And Wisconsin’s Department of Health Services reports that 2017 had the highest number of Lyme disease cases in the state to date.

In addition to Lyme disease, ticks can carry a host of other diseases such as babesiosis and anaplasmosis, a bacterial infection that attacks the nervous system.

Ticks pick up these diseases in their nymphal stages, when they often choose small rodents like chipmunks and mice as their hosts. Nymphs are the smallest form of ticks that are actively searching for hosts. They are the ticks most likely to spread diseases like Lyme. 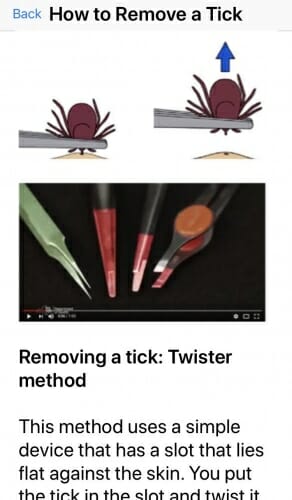 While these tick-borne illnesses are not spreading as fast as some diseases spread by mosquitoes, they are gradually increasing in numbers each year.

“When I first started here, there’d be about 400 cases a year that got reported to the state, and now it’s 4,000,” says Paskewitz. “Last year was the most cases they’ve ever seen (in Wisconsin).”

She adds that many ticks carrying Lyme disease also carry other human pathogens. Her recent work found that 40 percent of ticks are infected, and about 5 to 15 percent have more than one infection.

“I was startled when I saw this data set,” says Paskewitz, whose research focuses on diseases transmitted by mosquitoes and ticks.

Right now, in mid-June, adult deer ticks are already in decline. However, nymphs are just starting to become more active now and will continue further into summer, making the Tick App’s release timely for the summer tick season.

If the app gains enough users, Bron says the developers might add features such as GPS tracking and the ability to send push notifications when users enter high-risk areas. These types of GPS-based warnings are already in use in areas like Staten Island, and could be rolled out to other cities with urban-forest habitats like Madison.

Bron says their goal is to survey 200 people across Wisconsin, and they are hoping for additional participants across the Midwest. The researchers encourage everybody to participate because all data points help in understanding what makes ticks “tick.”