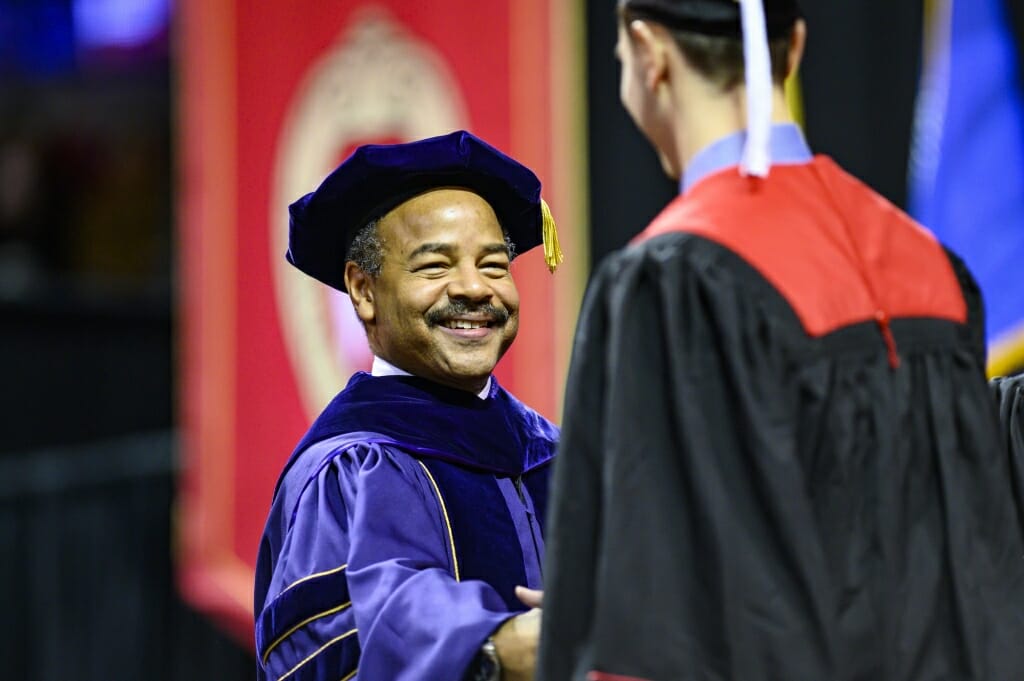 Eric Wilcots has been selected as the next dean of the College of Letters & Science, the largest academic unit at the University of Wisconsin–Madison.

Wilcots has been serving as interim dean of the college since August, when he succeeded John Karl Scholz, who became the university’s provost. Wilcots, the Mary C. Jacoby professor of astronomy, served as deputy dean and associate dean for research of the College of Letters & Science prior to being named interim dean.

“I am thrilled to make this important leadership appointment,” says Provost Scholz. “Eric enthusiastically embraces the breadth of scholarship and passion for learning that are at the core of the college, and his intimate understanding of how the college works will be an asset as we navigate the uncharted waters in which we find ourselves right now. He will be a terrific dean and I look forward to working with him as he assumes this role.”

The dean serves as the chief academic and executive officer of the college, with responsibility for its instructional, research and outreach environment, including oversight of its $356 million budget, faculty recruitment and retention, advancement and external relations, student academic affairs, and climate.

Wilcots received his bachelor’s degree at Princeton University in 1987 and Ph.D. from the University of Washington in 1992. He was a Karl Jansky Postdoctoral Fellow at the National Radio Astronomy Observatory in Socorro, New Mexico, from 1992-95. He came to UW–Madison in 1995 as a postdoctoral scholar and lecturer in introductory astronomy. After a year in that position, he joined the faculty as an assistant professor.

His research focuses on understanding the symbiotic relationship between the evolution of galaxies and their environment. He has helped spearhead UW’s involvement in the Southern African Large Telescope project. He has been a strong advocate for the Wisconsin Idea through his leadership of the Universe in the Park outreach program, as co-chair of the steering committee of the Wisconsin Science Festival and through his work on the Origins project.

Wilcots is recognized as an outstanding educator, having won two teaching awards. He served as the associate dean for natural and mathematical sciences in L&S before assuming the role of deputy dean and associate dean for research services.

In his leadership roles, Wilcots has championed a collaborative approach to decision-making and consistently worked to advance the level of research and scholarship in the college. He has been at the forefront of the college’s Inclusive Excellence Initiative, helping to create a series of inclusive teaching workshops for faculty and academic staff.

Wilcots, who becomes the first African-American to be dean of the College of Letters & Science, has been a passionate advocate for enhancing the academic success of students from underrepresented backgrounds and the quality of their experience in L&S.

“I deeply believe in the value of the liberal arts both as an excellent education for preparing our students to succeed in the world after graduation and as an approach to creating new knowledge and a deeper understanding of the world,” Wilcots says. “We have a great community of faculty, staff and students in the College of Letters & Science and it is an honor and privilege to serve as dean. I certainly want to thank Karl Scholz for his six years of outstanding leadership as dean of the college and his continued leadership as provost. I am looking forward to working with the provost, Chancellor Rebecca Blank, and our campus colleagues.”

In his leadership roles, Wilcots has championed a collaborative approach to decision-making and consistently worked to advance the level of research and scholarship in the college.

Leslie M. Smith, professor of math and engineering physics, chaired the 17-member search and screen committee, which recommended the finalists to Chancellor Blank and Provost Scholz.

Letters & Science serves approximately 20,000 undergraduate and graduate students in 37 academic departments, including five professional schools, who comprise nearly half of the university’s enrollment. L&S provides the liberal arts foundation for the university at all levels of study, teaching 65 percent of all UW–Madison undergraduate credit hours.

L&S recently created a new division that encompasses computer, data and information sciences, and it operates the career services program SuccessWorks, which provides students with career and internship opportunities as well as support for their personal and professional development. The college’s faculty, staff and students also participate in nearly 70 interdisciplinary research centers and institutes.