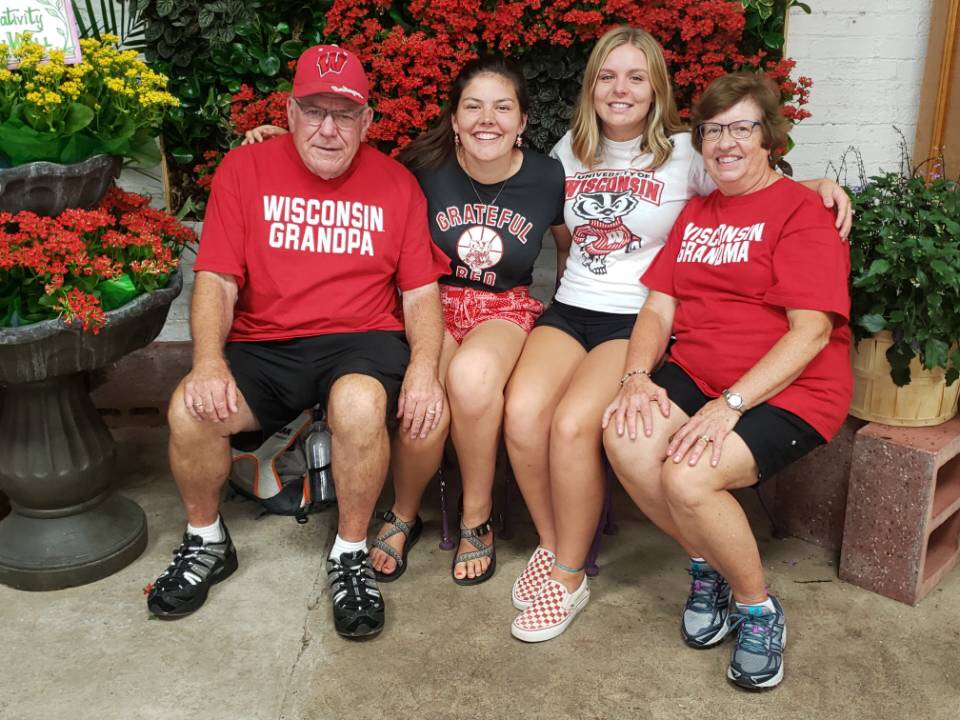 Attending your first college class can be lonely and daunting for some, but not for Taylor Wendricks.

Taylor, of Cambridge, is a first-year horticulture major at UW–Madison this fall who enrolled in Horticulture 120 as a requirement for her major. Also in the class are her cousin Danielle Wendricks, who is studying community and nonprofit leadership, education policy, and history; her cousin Darren Wendricks, a conservation biology and environmental studies student; and their shared grandparents, Carol and Nelson Wendricks, who are auditing the course. Danielle and Darren are from Madison and Carol and Nelson from Cottage Grove. 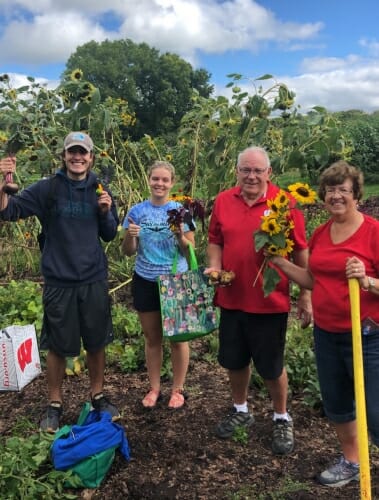 Taylor and Danielle originally enrolled in order to meet requirements for their respective majors. They encouraged their grandparents to audit the class, as they’d expressed interest in auditing for several years. A few weeks before the class started, Darren decided to sign up as well, making it five Wendricks in one classroom.

They sit all together in the front row of the class. Carol, like any good grandmother, brings them snacks from home, which makes the class feel a little more like home.

“Of course I really enjoy seeing my grandparents twice every week, but I especially enjoy the homemade lunches my grandparents pack us. It was also entertaining when my grandparents showed up to class on the day before Halloween dressed in costume. They passed out candy and Halloween Rice Krispies to our entire lecture,” Darren said.

Danielle also noted that her grandma brings an interesting perspective to the topic of horticulture.

“My grandma grew up on a farm, so she has an understanding of plants that we are not really learning in the classroom. Often when the teaching assistant is unable to work with everyone, she will walk around and point things out to students,” Danielle said.

Carol said she grew up in the farming community of Algoma, Wisconsin. 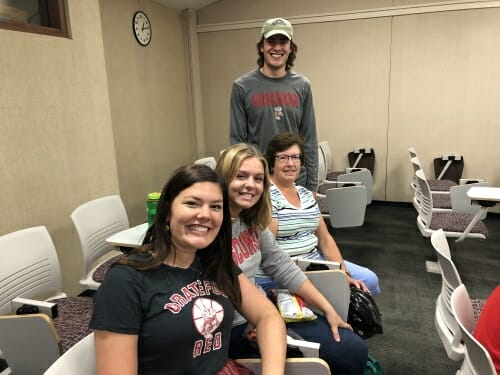 From the front, Danielle, Taylor, Carol and Darren Wendricks in the classroom. Contributed photo

“Gardening and farming was something we did as a family, alongside my four sisters and one brother. It was a family affair. I also participated in 4-H, and did projects in gardening. I learned from my parents on how to take care of the land, and I assume they learned from their parents. It’s so special to be able to learn more about horticulture and plants alongside my three eldest grandchildren,” Carol said.

Nelson also had some farming experience prior to his auditing the course.

“I grew up in the town of Forestville which has a population of 400 people, and I helped my buddies with harvesting farm crops,” Nelson said.

Taylor, Danielle and Darren appreciate the opportunity to see their grandparents every week. For their part, Carol and Nelson are excited to share their first college experiences with their grandchildren. Already a close family, it’s a wonderful opportunity to become even closer.

“On the first day of class I had a friend with me and I introduced her to everyone, and she said, ‘This is exactly what I would expect from your family’,” Taylor said.