For decades, the Wisconsin Alumni Research Foundation has helped UW–Madison inventors transform their ideas into reality, whether it’s a solar cooker, a self-tying shoelace device or even the DNA of the bubonic plague.

Now WARF is displaying the visual beauty — and wide variety — of all those ideas.

From 5 to 7 p.m. on Sept. 30, WARF will hold a reception to launch an exhibition of patent drawings dating as far back as 1928 in the Union South art gallery. The Artistry of Innovation: Patent Drawings Through Time aims to showcase scientific discovery with an artistic spin.

This is the sketch for a 1959 patent for a vacuum pump, from Raymond G. Herb. Ion pumps were invented in the middle of the 20th century. Free of oil or moving parts, the technology would help make new, high precision research tools possible such as the scanning probe microscope. This design worked on a small scale and was capable of producing an impressively high vacuum.

“We designed it to be an immersive experience so that you don’t need to be a scientist to be introduced to 88 years of genius on the UW–Madison campus,” says Sally Younger, a WARF technical writer who’s played a pivotal role in the curation of the exhibit.

The reception is free and open to the public. The opening reception will also feature remarks from Michael Falk, WARF’s general counsel.

The exhibit, which will run through Nov. 14, was done in partnership with the Wisconsin Union Directorate art committee. It features 26 different patent drawings spanning 88 years, a 3-D prototype and other curated materials.

WUD art is a student-run committee that manages all aspects of exhibitions, from artist selection and installation to marketing efforts. It also programs shows in the Wisconsin Union’s two galleries: the Class of 1925 Gallery in Memorial Union and Gallery 1308 in Union South.

WARF has a collection of more than 1,700 active patents and perhaps hundreds more that have gone “off-patent.”

“The staff at WARF are highly proactive,” says Helen Blackwell, a UW professor of chemistry and featured inventor. “They are aggressively trying to market my patents to many different business sectors.”

WARF narrowed it down to 75-100 patent drawing finalists and posted them on the walls of its office. From there, the whole staff voted to narrow it down to the most engaging and stimulating drawings. 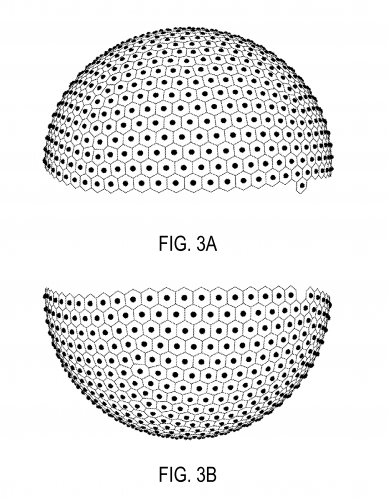 This is a 2016 sketch from inventor Cheng Guan Koay for a system and method for determining k-space views and diffusion weighting directions using centroidal voronoi tessellations.
The figure depicts a new solution to the mathematical problem of distributing a set of points uniformly across the surface of a sphere. The problem is of great importance to modern biomedical imaging, Courtesy of WARF

“Technology really defines our lives…. it’s kind of an interesting experience to step back and ask ourselves ‘how do you display genius and put it on a wall?’ instead of taking for granted these phenomenal technologies we use every day,” says Younger.

Beyond the functional purpose of the drawings, many of them are visually stunning.

“There’s no quiz at the end, I don’t want anyone to feel intimidated by this. Patent drawings are made to be understood,” says Younger.

WARF was founded in 1925 as a nonprofit to not only manage patents, but also oversee licensing, commercialization and university research. Its investment portfolio of $2.6 billion allows ongoing discovery.

The inventions whose drawings are featured in the exhibit include:

Braille Watch, 2013: Designed to help the seeing-impaired tell time by touch, this is a top view of a four-part disk and pin assembly arranged to indicate the Braille number 0916 and PM.

Plasmid DNA from Yersinia Pestis, 2004: The bubonic plague (also known as the Black Death) has claimed the lives of millions of people. It is caused by the bacterium Yersinia pestis, which is transmitted to humans from rodents via flea bites. Occasional outbreaks still occur today, particularly in villages and rural areas in developing countries. A team of multidisciplinary researchers determined the complete DNA sequence of three plasmids from the bacterium. This information could help develop tests and tools to combat the disease. 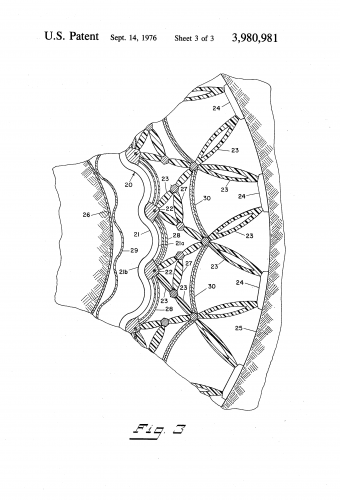 This is a 1976 drawing of a support structure for a rippled superconducting magnet. In electric generating stations, excess energy produced during off-peak hours can be stored in superconducting magnets and later returned to the power system during periods of high loads.
In the mid 1970’s a trio of UW inventors — Roger Boom, Harold Peterson and Warren Young — created an electrical magnet for storing large amounts of energy at much less cost than magnets employing conventional support structures.

Solar Cooker, 1957: UW–Madison was a pioneer of solar energy research in the 1950s. The Solar Energy Lab created this simple device for cooking in the developing world.

Method for Ripening Cheese, 1959: Cheese passes through a series of complex physical and chemical changes as it ages, which posed costly storage problems for industry at midcentury. Researchers discovered that subjecting curd to ultrasonic sound waves accelerated the ripening process. They envisioned a stylish apparatus that could shoot 0.05 watt hours of energy per pound of curd.

Shoelace Tying Device, 2010: Individuals stricken with birth defects, amputations, strokes and arthritis can find shoelace tying difficult if not impossible. This drawing illustrates a lightweight, portable device that allows a person with limited or no use of one hand to securely tie his or her footwear.