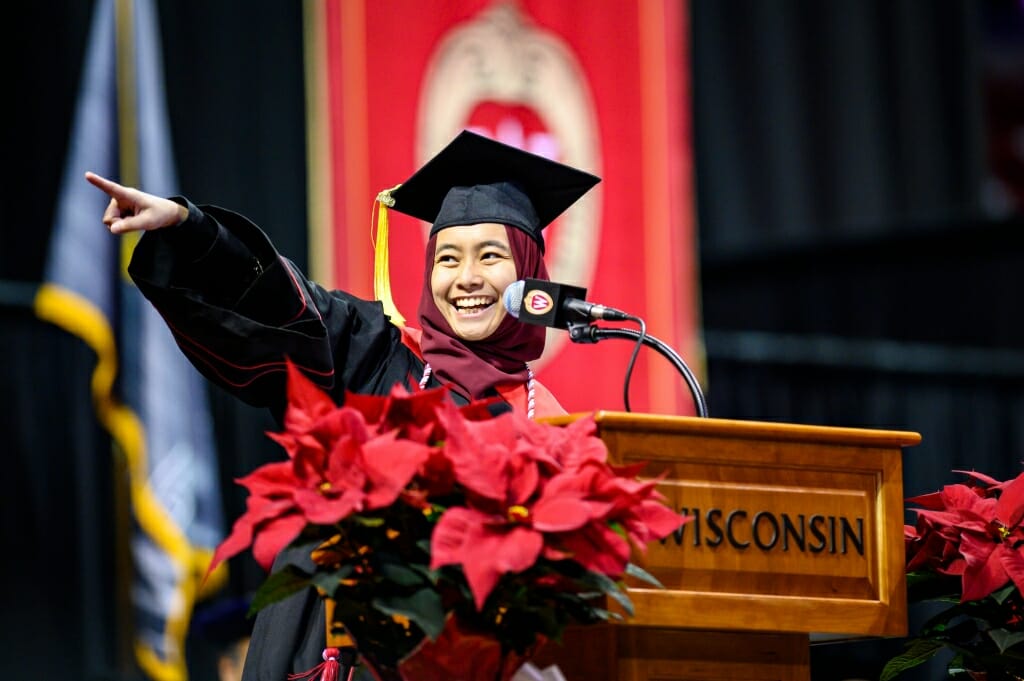 UW–Madison graduate and student speaker Lisa Kamal points to an audience member during her speech at the winter commencement ceremony Dec. 15, 2019, at the Kohl Center. Videos of her speech have been viewed more than 3.5 million times. Looking back, Lisa calls the experience life-changing. “It made me realize how much of an impact we can make no matter how small we feel,” she says. Photo: Bryce Richter

Flying back to Malaysia from the United States recently, Lisa Kamal began chatting with the passenger next to her. They shared travel itineraries, and Lisa mentioned that she’d just graduated from college in Wisconsin.

The reference to Wisconsin piqued her seatmate’s curiosity.

“Did you know the girl who gave the speech at that graduation ceremony?” he asked.

“That was me!” Lisa replied.

As the student speaker at UW–Madison’s winter commencement, Lisa (who uses her first name on second reference) has made an impact far beyond the 7,379 people who heard her at the Kohl Center Dec. 15.

Videos of Lisa’s speech have been viewed more than 3.5 million times on various social media platforms. Many of the views have come from her home country of Malaysia, where the speech’s impact has been particularly pronounced. Malaysia’s social news network included Lisa on its year-end list of “16 Times Everyday Malaysians Made Us Proud With Their Achievements in 2019.”

Don Stanley, a UW–Madison faculty associate and an expert on social media, says the reach of Lisa’s video is unusual even by today’s viral standards.

Lisa, a standout geology major, opened her commencement speech by singing a few lines from the Broadway hit “Hamilton.” She went on to explain that the cast recording had become a coping mechanism for her during some dark times.

“My second year in college, I suffered burnout to the point of losing motivation to finish this degree,” she told her fellow graduates. “I’d overwhelmed myself past the breaking point, kept chasing things that would look good on my résumé. But I stopped feeling passion for anything I did or learned, and the truth was, all I wanted to do was sleep, all the time. I was so desperate to find a spark of enthusiasm — the same one we all overflowed with at the beginning — only to feel so helpless.”

Latching onto the empowering lyrics of “Hamilton” helped, she said, as did the support of friends, faculty and staff members. She also sought counseling through University Health Services, a step she’s been open about because she hopes to reduce the stigma around seeking mental health services.

Her speech included many uplifting moments.

“Friends, look at where you are, look at where you started,” she said. “You made it here to the last act. You did it. Day after day, you made the choice to rise up and give yourself another chance to start over every single morning. And for me, I sang like my life was a Tony Award-winning Broadway musical.”

Lin-Manuel Miranda, the creator and star of “Hamilton,” was among those who reached out to Lisa, thanking her on Twitter for her inspiring story.

Stanley, who has been teaching on campus since 2000, says students today crave authenticity and can easily detect phoniness. They seem more willing to acknowledge their own challenges, and they value that honesty in others, especially when it comes to mental health issues, he says. He noticed this in the comments that people posted on Lisa’s video.

“Her humanness is what made her speech so relatable,” Stanley says. “She kept it light, but she didn’t shy away from talking about her struggles. People expect a commencement speaker to have life figured out, so it was very brave of her to do that. Clearly, it was a voice people wanted to hear.”

The student speaker for winter commencement is chosen by the senior class officers. Lauren Sorensen, president of the senior class, says Lisa’s speech stood out during the audition process for its honesty and vulnerability.

“It wasn’t a list of accomplishments or some choreographed thing about how great college was every day,” Sorensen says. “She admitted that she struggled at times, and that’s what the college experience is like for a lot of students. She was real, and her speech was courageous.”

Lisa, now back in Malaysia, says the reaction to her speech still seems unreal.

“During commencement day, I felt I did the job well enough and that it would be a good memory to cherish,” she says. “I did not expect it to gain so much attention from people beyond the ceremony. The next morning when I woke up, it was nighttime in Malaysia and my phone was blowing up with Twitter notifications spreading the video around. I guess in some ways, this was my Wisconsin Experience, reaching those beyond the university.”

Many students, especially fellow Malaysian students, have said they can relate to her experiences, Lisa says.

“It is such a common struggle, but it is also one that makes you feel very alone,” she says. “A lot of people said they shed tears watching it. It was really heartwarming knowing we all heard each other.”

Being a minority in the U.S., Lisa says the speech also was an important reminder that representation matters.

“I realized that I carried that important message of ‘If she can do it, I could, too’ to young Malaysians and students. This was the same message that the representation in ‘Hamilton’ carried, and I was happy to forward it along.”