UW’s Elizabeth McCoy was a pioneer of 20th century microbiology 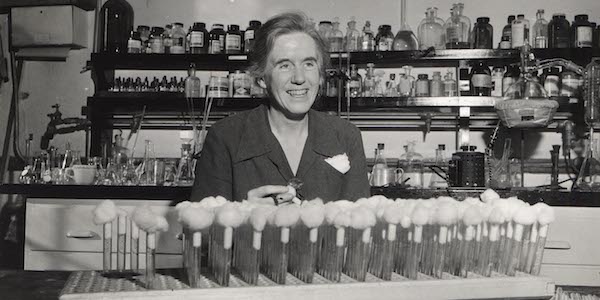 Elizabeth McCoy rarely received the accolades that her male colleagues did. Contemporary news stories about her work slighted her for her gender but, by all accounts, she felt welcome at UW–Madison and respected by her peers. UW Archives

When Elizabeth McCoy was about to graduate from the University of Wisconsin in 1925, she faced a choice: accept an offer to join the U.S. Department of Agriculture’s home economics division, or stay at the UW and study with future university president E.B. Fred.

She chose graduate work with Fred, and the world gained a pioneering microbiologist who would support America’s efforts in World War II, discover antibiotics and train scores of students who followed in her footsteps.

From early on, McCoy was interested in applications of bacteriology. Her graduate work focused on bacteria that can make acetone and butanol, useful chemicals for producing synthetic rubber and other materials. In 1934, she also worked with Fred and College of Agriculture (now Agricultural and Life Sciences) Dean Ira Baldwin to publish a mighty tome, 343 pages long, organizing all existing knowledge of nitrogen fixation, a partnership with bacteria that provides useful nitrogen to plants.

During the Second World War, McCoy was instrumental in the UW’s efforts to expand penicillin production. She identified a key mutant of penicillium mold that produced large amounts of the drug. Descendants of that strain continue to produce penicillin around the world today. McCoy went on to discover the antibiotic oligomycin, which, while toxic, formed the basis for research into metabolism and potential cancer treatments.

As a woman in a field dominated by men, McCoy rarely received the accolades that her male colleagues did, despite achieving full professorship in 1942. Surviving news reports of her work slight her for her gender. But by all accounts, she felt welcome at the university and respected by her peers.

“She just had an amazingly broad spread of information in all kinds of areas,” recalls Bob Burris, a professor of biochemistry at UW–Madison, in an oral history from university archives. “She was a bacteriologist’s bacteriologist.”

During her career, McCoy trained a staggering total of 47 PhD and 110 master’s students, many of whom went on to distinguished careers of their own.

Read more about McCoy’s life and work in this story from the American Society for Microbiology, asm.org/Articles/2020/July/Elizabeth-McCoy-A-Hidden-Figure-of-Industrial-Bact, and in On Wisconsin Magazine, onwisconsin.uwalumni.com/online-extra/on-alumnae-elizabeth-mccoy/.