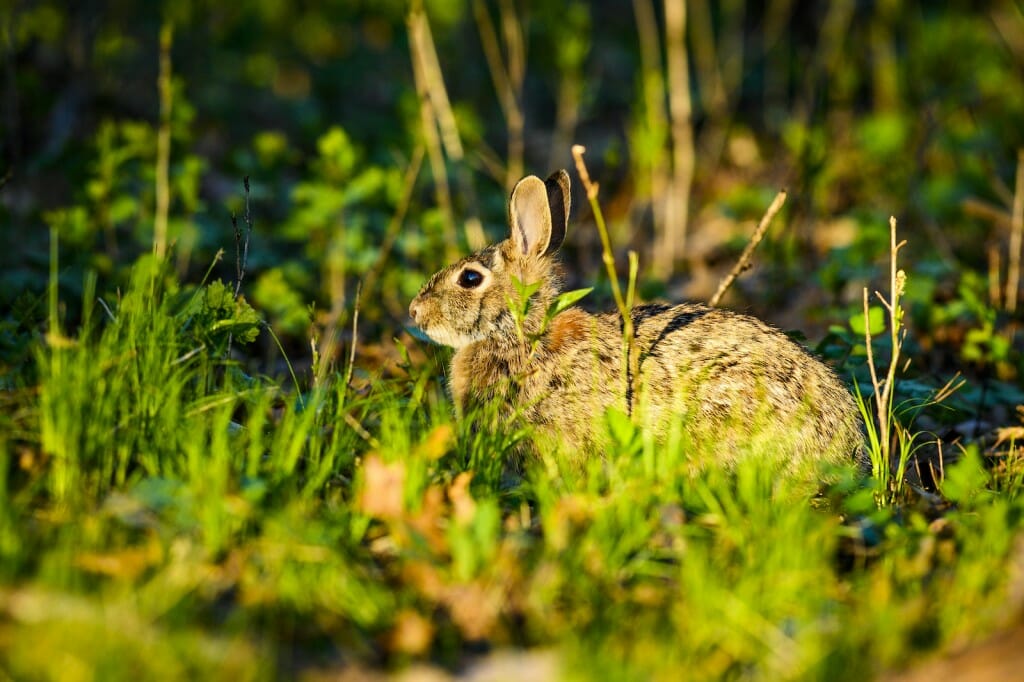 A rabbit listens between nibbles in the Grady Kettle Hole Forest at the UW–Madison Arboretum. Photo: Bryce Richter

Researchers and clinicians are sounding the alarm as the fatal rabbit hemorrhagic disease, RHDV2, spreads across the U.S. In response, the UW Veterinary Care Special Species Health Service at the University of Wisconsin School of Veterinary Medicine has begun offering an emergency-authorized vaccine against the disease for rabbits.

The clinic is one of about a dozen animal hospitals in the state to offer the vaccine and part of a growing effort nationally to encourage rabbit owners to seek vaccination. UW Veterinary Care offers the RHDV2 vaccine on Fridays every three weeks through the Special Species Health Service. Any rabbit patients in Wisconsin are welcome; owners do not need to be previously established clients with UW Veterinary Care to make an appointment.

RHDV2 is a highly contagious foreign animal disease that likely originated in Europe. It affects both domestic and wild rabbits but is not spreadable to other species or humans.

The first strain of rabbit hemorrhagic disease was discovered around 2010. Since then, it has traveled to North America and mutated into the form of the virus that is now wreaking havoc on U.S. wild rabbit populations, primarily in the West. The U.S. Department of Agriculture expedited the vaccine distribution process, granting emergency authorization in September 2021 to tackle the problem and limit the disease’s spread to commercially raised and domestic rabbits.

Among the most popular pets in America, rabbits rank third behind dogs and cats, with an estimated 3 million rabbits kept as pets in U.S. homes.

Kurt Sladky, a veterinarian and clinical professor of zoological medicine and special species health at the UW School of Veterinary Medicine, believes the virus is likely in Wisconsin despite an absence of detected cases.

“Some wild rabbits, if found dead and suspected of disease, are submitted to laboratories equipped to make the diagnosis, such as the National Wildlife Health Center here in Madison,” Sladky says. “But there’s no easy way to find and track how many have died in the wild.”

Sladky describes the disease as devastating. Once rabbits have contracted the virus, they typically bleed to death. With the currently circulating strains of the virus, veterinarians and public health officials expect the mortality rate to be extremely high — killing between 70 to 100 percent of infected rabbits.

The virus spreads easily through contact with body secretions such as saliva, urine and blood. It can live up to a month on surfaces like clothing or blades of grass, increasing its transmissibility.

“Your rabbit could become infected through urine, feces, blood … even a fly could land on a carcass with the virus and transmit it to another rabbit if the fly’s feet make direct contact with the nose of another rabbit,” Sladky says. “It’s so easily transmissible rabbit to rabbit.”

Pet rabbits are becoming vulnerable, Sladky warns, because of the virus’s numerous outbreaks and staying power. The disease’s global spread is believed to have occurred through routes like rabbit shows and meat production chains. For this reason, UW Veterinary Care’s Special Species clinicians requested access to the vaccine as quickly as possible for their patients. In 2021, the hospital saw nearly 800 rabbit patient visits.

The USDA and Wisconsin Department of Agriculture, Trade and Consumer Protectoin collaborated to authorize a two-dose series of shots produced by Medgene Labs, a South Dakota company. The vaccine is similar to one successfully developed in Europe. Studies show the U.S.-produced vaccine is highly effective. It consists of an initial dose, a booster three to four weeks later and a yearly booster.

In addition to the vaccine, Sladky recommends other steps to protect pet rabbits. Though the weather is warming and outdoor exercise might be ideal, pet rabbits should refrain from going outside — or at least until they are fully protected by the RHDV2 vaccine. In addition, rabbit owners should purchase hay, a core component of a rabbit’s diet, from known reputable sources. Ultimately, preventing access to other rabbits, especially wild rabbits, remains key.

“We’re trying to educate clients that an important infectious disease of rabbits is spreading from state to state,” Sladky says. “You should think about the ways your pet rabbit could become exposed and the potential consequences.”

For more information on the rabbit vaccine clinics, call UW Veterinary Care at 608-263-7600.