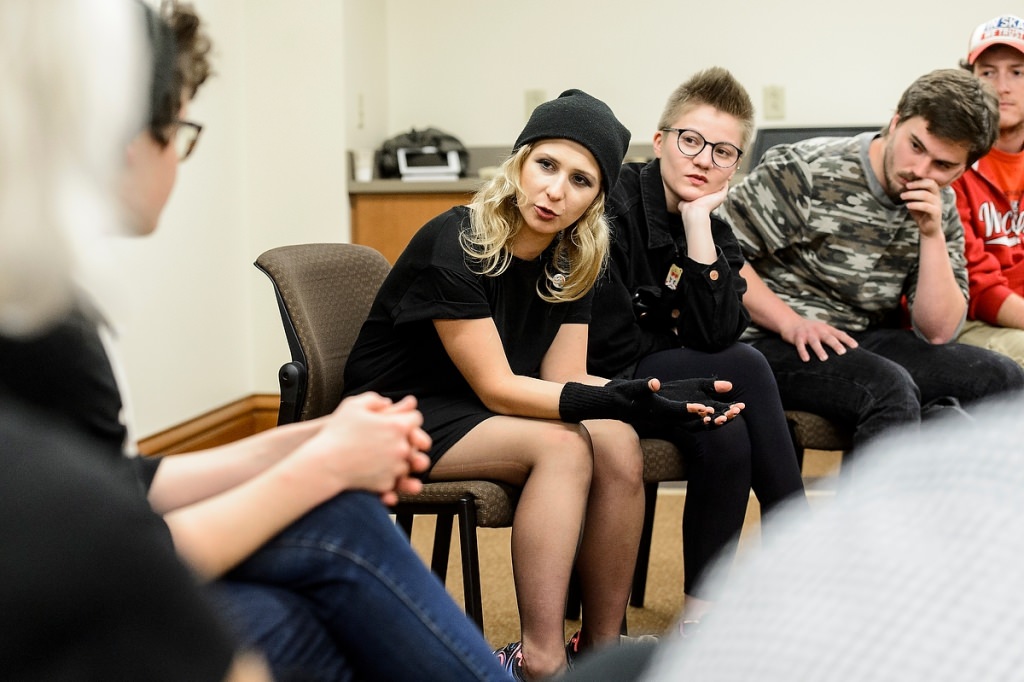 Maria Alyokhina (left) and Sasha Bogina (right), members of the Russian feminist punk group Pussy Riot, speak in Russian with members of the UW–Madison Russian Flagship Program inside the Memorial Union’s Council Room. The discussion followed a larger public event that was open to the public in the Union’s Shannon Hall. Photo: Bryce Richter

Jerry Anders, a senior majoring in computer science, has been looking forward to a chance to meet Pussy Riot, the Russian feminist punk group, for a while now.

“It’s exciting to get to meet international celebrities. I was just thinking about that earlier today,” Anders says. “When I studied abroad, I was actually at the Church in Moscow where they filmed one of the clips, so I knew going into the church, ‘Oh, wow, this is where that happened.’ It’s really exciting.”

Pussy Riot has gained international recognition for its provocative activist guerilla art and strong criticism of Russian president Vladimir Putin. In 2012, following a political protest performance in Moscow’s Cathedral of Christ the Savior, three members of the group were arrested for “hooliganism.” Two of them were sentenced and served two years in a Russian prison for the performance.

On Thursday, Nov. 17, one of the original members of Pussy Riot, Maria Alyokhina, with a new member of the group, journalist Sasha Bogina, gave a public conversation and Q&A in the Wisconsin Union Theater about their activism and current work focused on prison reform, as well as the establishment of their own news media site, Mediazona. 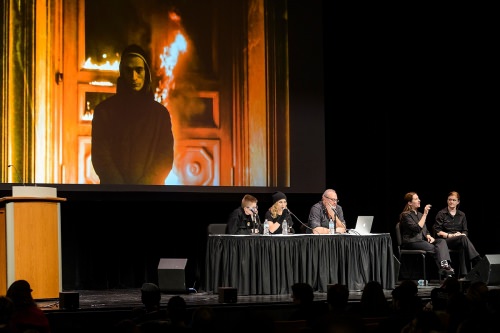 Following the public event, 15 UW–Madison students of Russian met with the group for a Russian-language discussion, where they asked questions about feminism in the U.S. and Russia, the recent U.S. presidential elections, and the group’s impressions of the U.S. during their current tour.

“It was really, really exciting to meet them. They seemed really knowledgeable about protesting, and Wisconsin, specifically, and our history of protest culture here, which was impressive,” says Samantha Eckmann, a junior majoring in Political Science.

Sam Frerichs, a senior majoring in Russian, thought the conversation was a great complement to his current studies. “I have a class right now that’s on Russian politics, and we read a book about Pussy Riot, so I actually know a bit more in depth about the trial and what they did to prepare for the actual events in the church… It was really cool to read about and it was even cooler to ask them questions. I asked them why they decided to perform in that specific cathedral and why they thought that was an appropriate place.”

At one point, Alyokhina responded to a student with her own question, “What are you studying?” The student, Alexandra Steiner, a senior, answered, “Russian and International Studies. I’d like to become a diplomat.”

Alyokhina responded that she could tell. “That was a very diplomatic question you just asked!”

With support from the Wisconsin Union Directorate, the Russian-language discussion was organized by the UW–Madison Russian Flagship, a program for undergraduate students of any major to reach a professional level of competence in Russian by graduation.

The Russian Flagship Program frequently organizes conversations with Russian-speaking visitors from various academic and professional backgrounds. Last year, for example, students met with a group of business professionals and MBA students from the National Research University Higher School of Economics in Moscow; with an actor, director, and graduate of the Moscow Art Theater School; and with a group of high school teachers and students from Irkutsk, Russia, visiting Wisconsin as part of an exchange project focused on two of the world’s largest freshwater lakes, Lake Superior and Lake Baikal.

Yasha Hoffman, a junior majoring in music and Russian, thought the conversation was a great chance to engage with global events. “I think this event is important, because it’s different than just learning Russian in the classroom setting. It’s a really great way to use your knowledge and be involved with issues. I think it helps us realize why Russian is a critical language and to understand the geopolitical struggles that we’re all facing. It’s a chance to engage with all of that face to face.”

The event was presented by the Wisconsin Union Directorate (WUD) Performing Arts and Distinguished Lectures Committees and co-sponsored by CREECA.  Support provided by the Anonymous Fund and Wisconsin Union Theater Endowment Fund.

The Russian Flagship Program is a collaborative initiative of the Department of German, Nordic, and Slavic and the Language Institute, with the Center for Russia, East Europe, and Central Asia (CREECA) and the Doctoral Program in Second Language Acquisition, funded by The Language Flagship, a public/private partnership sponsored by the National Security Education Program (NSEP).