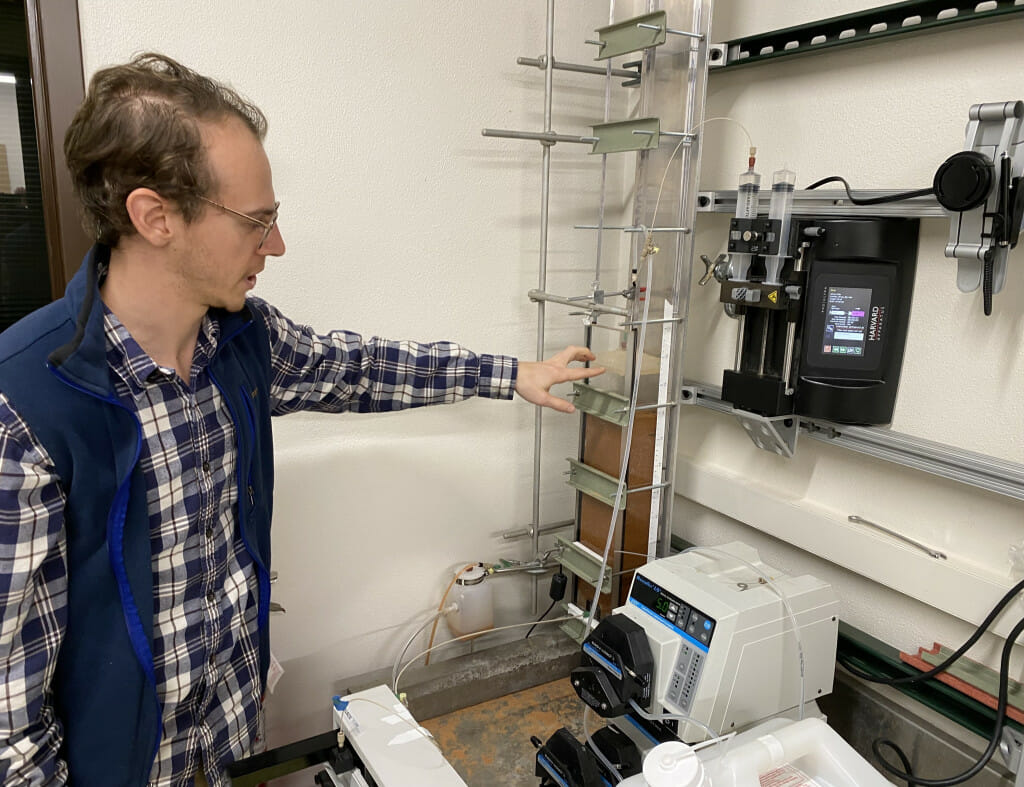 Will Gnesda demonstrates a PFAS flow lab experiment. Gnesda is graduate student in the UW–Madison Department of Geosciences and lead author of a new study modeling PFAS flow through the ground. The experiment is designed to build on the modeling study. Photo by Will Cushman

As a growing number of communities are forced to confront PFAS contamination in their groundwater, a key hurdle in addressing this harmful group of chemicals lies in unraveling how they move through a region of the environment called the unsaturated zone — a jumble of soil, rock and water sandwiched between the ground’s surface and the water table below.

A new study by University of Wisconsin­–Madison researchers offers a simplified new way of understanding PFAS movement through this zone.

PFAS is an abbreviation for perfluoroalkyl and polyfluoroalkyl substances. The synthetic chemicals have been used for decades in products ranging from nonstick cookware to firefighting foams. Some PFAS chemicals are associated with health risks and can persist in the environment indefinitely. Modeling their flow through the unsaturated zone — also known as the vadose zone — is important because the chemicals can linger there for years or decades, all the while slowly leaching into aquifers many communities use to provide drinking water.

Unfortunately for those tasked with this job, the complexity of the unsaturated zone and the molecular structure of the PFAS chemicals themselves make this crucial work a considerable challenge.

“The unsaturated zone is really complex because you have air, you have grains and you have water all moving dynamically all the time,” says Will Gnesda, a graduate student in the UW–Madison Department of Geoscience and the study’s lead author.

“It’s always been a big issue for all types of contaminants, understanding how the unsaturated zone works,” Gnesda says. “But PFAS add another layer of complexity.”

That’s in large part because PFAS molecules are attracted to the boundary between air and water.

“The unsaturated zone is full of those boundaries,” says Gnesda.

For these reasons, modeling the movement of PFAS through the unsaturated zone has traditionally required a lot of guesswork and immense computational power. Gnesda, who works in the lab of geoscience professor Christopher Zahasky, is striving to improve — and simplify — this modeling work.

Through a series of lab observations and calculations, Gnesda and his colleagues have produced a simplified framework that holds promise for reducing the computing power and time required to model PFAS movement through the ground. The framework can be applied to specific sites — an important factor for making it useful to utilities and environmental consultants attempting to predict how PFAS contamination may affect local reservoirs in geologically unique settings.

The work was recently published in the journal Environmental Science & Technology.

The researchers applied their modeling framework to a real-world site near Rhinelander, a city of about 8,000 in Wisconsin’s Northwoods where two municipal wells were found to be contaminated with PFAS in 2019. The site’s geology has been extensively studied, providing the team with useful data for testing the modeling framework.

They found that several factors have a major influence on where and how long harmful PFAS chemicals stay locked in the ground before flowing below the water table. These factors include the amount and location of organic carbon held in a site’s rocks, the amount of gravelly sand and the porosity of soils and rocks.

While the research points toward a more accessible approach for modeling PFAS flow in the ground, more analyses need to happen to refine and validate the framework. That is the focus of a new collaborative project led by Zahasky and funded by the National Science Foundation. Work on this project is underway as Gnesda and his colleagues attempt to track PFAS molecules as they flow through a simulated unsaturated zone and aquifer in a lab back on the UW–Madison campus.

“We’re going to see how well our theory connects to the lab,” says Gnesda, who expects the experiments to further refine the modeling framework so they can ultimately be applied to more real-world scenarios.