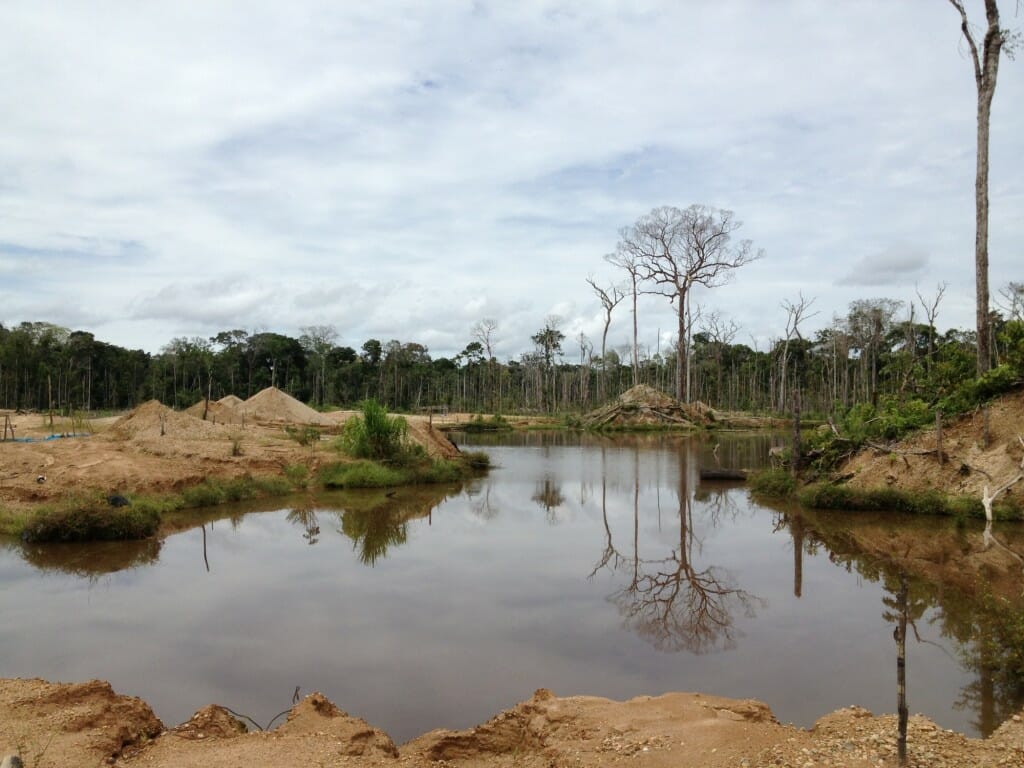 Most gold mines in the Peruvian Amazon are unregulated, small-scale operations, leaving governments without ways to protect the surrounding environment or track how much forest is lost to mining. Courtesy of Lisa Naughton

If you’re wearing gold jewelry right now, there’s a good chance it came from an illegal mining operation in the tropics and surfaced only after some rainforest was sacrificed, according to a team of University of Wisconsin–Madison researchers and alumni who studied regulatory efforts to curb some of these environmentally damaging activities in the Amazon.

The researchers, including UW–Madison geography Professor Lisa Naughton, investigated mining-related deforestation in a biodiverse and ecologically sensitive area of the Peruvian Amazon to see whether formalizing and legalizing these mining operations might curb some of their negative effects.

Their study, published June 2 in the journal Environmental Research Letters, was co-authored by a group including UW–Madison alumnae Nora Álvarez-Berríos, now studying land-use and climate impacts at the International Institute of Tropical Forestry, and Jessica L’Roe, now a geography professor at Middlebury College.

The team focused on an area around the Tambopata National Reserve in Peru from 2001 to 2014. During this time period, Naughton says, demand for gold rose, roads penetrated the region and mining surged. In turn, mining-related deforestation rose by almost 100,000 acres over their study period.

“Because the gold is in the sediment scattered under the forest floor, to extract the gold, you have to remove the forest and dig,” Álvarez-Berríos says. “You have to cut a lot of the forest and excavate sensitive waterways.”

While these mining operations are often called “artisanal” or “small-scale,” in aggregate they are very destructive. In many countries they operate outside the law, and millions of people are involved across the tropics. Álvarez-Berríos says the typical first step to reducing the environmental impact of artisanal mining is bringing it under governmental oversight, formalizing the activity. That way, local agencies can manage the impacts and protect both ecologically sensitive areas and the economic well-being of poor mine workers.

“Peruvian authorities, like authorities in other gold-rush sites, have given up on trying to stop gold mining. They’re trying to confine it and contain it,” L’Roe says. “Most of the studies about formalization are mainly about trying to help the poor, or make it more fair for the poor. Seldom, almost never, as far as we can tell, have these formalization projects been assessed for their environmental impact. So that’s what we were looking at.”

While these mining operations are often called “artisanal” or “small-scale,” in aggregate they are very destructive.

During their study period, local agencies issued provisional titles to miners to conduct their operations safely. After receiving a provisional title, miners would, in theory, undergo a series of environmental impact and compliance assessments before they started work.

But, as L’Roe says they found, the regulation process took a long time. Many miners simply took their provisional title as a green light to start mining, and never went through with the environmental impact assessments. Over their study period, no mining operations made it through the full compliance process, and as such they found little evidence for improved environmental outcomes in formalized mining areas.

To assess environmental outcomes, the team used satellite imagery analysis to see how much of the forest had been cut down, as compared to areas without formalized mining regulations.

Naughton says while formalizing mining has the potential to decrease environmental damage, it needs enforcement and regulations that match the local context. Formalization without environmental impact assessment or enforcement could just encourage more damaging and dangerous mining, or the expansion of these operations under the pretense that what they’re doing is legal.

But gold rushes are exactly what they sound like, Naughton says: rushed. They’re fast, and slow formalization processes with many steps and provisions and impact assessments often cannot keep up with the pace of extraction.

“To sort out in a fair way who owns what land, with what rights, that is a slow process,” Naughton says. “This gold rush is explosive. By the time you have well-regulated and transparent public land and property rights, the forest will be gone.”

The team plans to go back to Tambopata to present its results to local stakeholders. Many members of the community are already aware of the problems with mining formalization but have not had a chance to systematically study the environmental consequences. The three co-authors hope their study will set a precedent for monitoring formalization interventions in Tambopata and other tropical sites losing forest to mining. They are already sharing results and methods with colleagues concerned about gold mining impacts in Colombia, Brazil and Bolivia.

“We’ll go back to our study site and share the results — but in a humble way because folks there know that it hasn’t worked well, and they know the problems,” says Álvarez-Berríos. “So, yes, it’s important to share it with that group of stakeholders and experts, but maybe even more important is to share the results and our methods and design for studying this problem with folks working in the many, many other areas where there’s uncontrolled small-scale gold mining and where formalization efforts are being launched with best intentions.”