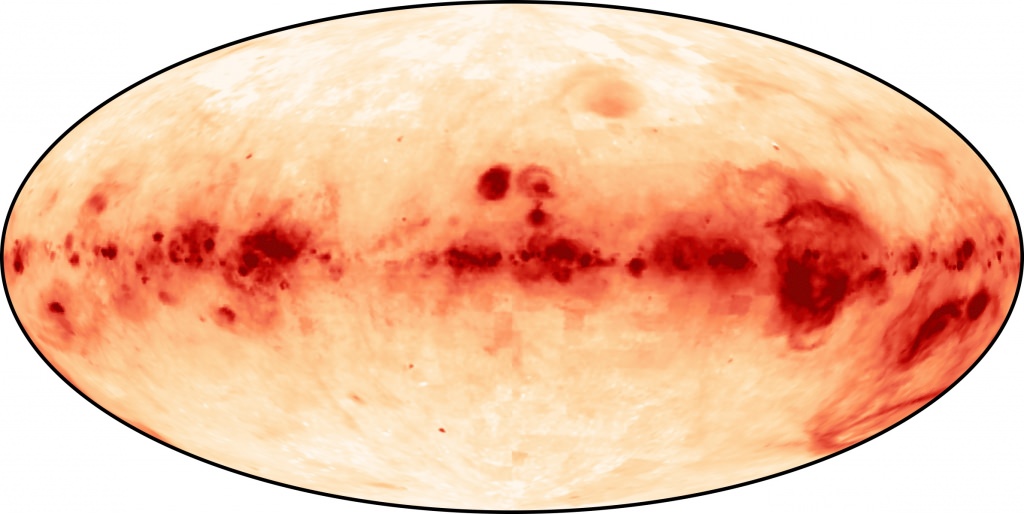 A survey image of ionized hydrogen gas in the Milky Way. The gas, shown in red, is recognized as a distinct feature of the galaxy — the Reynolds Layer — named after former UW–Madison astrophysicist Ron Reynolds, who discovered it. WHAM Collaboration, UW–Madison, Space Science Institute & National Science Foundation

Like a lot of pioneering science, the Wisconsin H-Alpha Mapper (WHAM) got its start as the shoestring project of a curious young researcher.

Sawing a hole in the ceiling of an office at the University of Wisconsin–Madison’s Physical Sciences Laboratory in the late 1970s, astrophysicist Ron Reynolds pointed a specially built spectrometer skyward for the first time and discovered a previously unknown feature of the Milky Way.

Everywhere he looked with his novel telescope, Reynolds observed the faint red glow of ionized hydrogen gas. It was the first hard evidence that vast clouds of ionized hydrogen — hydrogen gas atoms stripped of electrons — permeate the space between the stars. “No one expected to see ionized hydrogen out in the middle of nowhere,” he said in a 2004 interview. “It’s all over the sky, but it is brightest in the plane of the galaxy.” 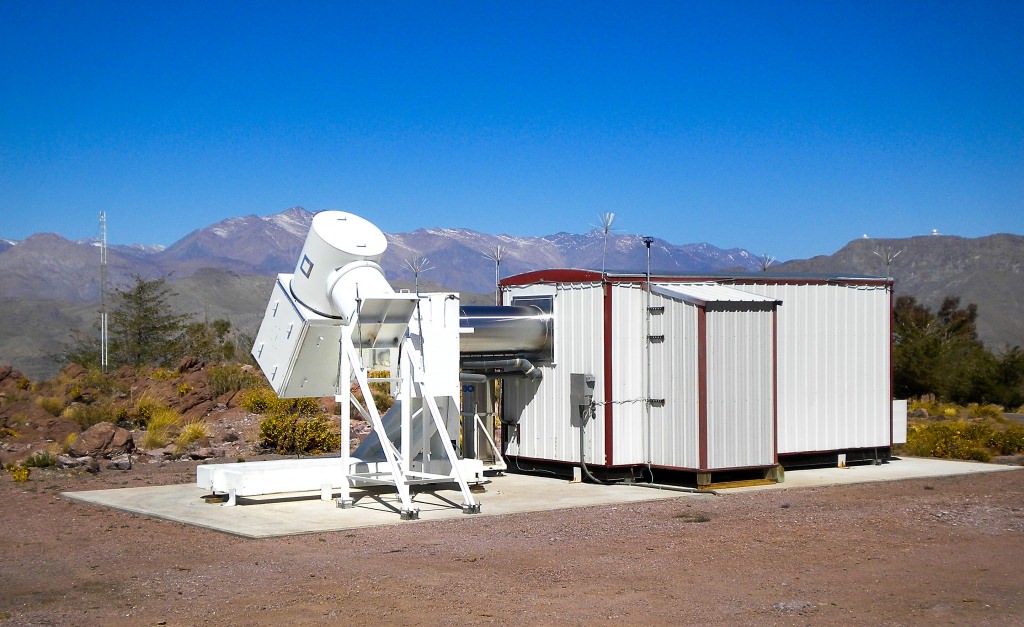 Wisconsin H-Alpha Mapper (WHAM) at the Cerro Tololo Inter-American Observatory in Chile. WHAM has been an astronomical workhorse, mapping a key ingredient of the Milky Way’s interstellar soup of dust and gas for two decades — first atop Kitt Peak, Arizona, and for about the last decade in the Andes mountains. Photo: L.M. Haffner

Building on those first efforts to tease out a new and mostly hidden feature of our galaxy, Reynolds and his colleagues, including Matt Haffner, a senior scientist in UW–Madison’s astronomy department, developed WHAM, a spectrometer capable of detecting the faint, diffuse light emanating from the space between the stars. The instrument, supported by the National Science Foundation and operated by the Space Science Institute in Boulder, Colorado, has been in almost continuous operation for the past 20 years. It was first atop Kitt Peak in Arizona and then relocated to Cerro Tololo in Chile, where it has been observing the Southern Hemisphere sky for about the past decade.

This past month, Haffner, who assumed direction of WHAM upon Reynolds’ retirement in 2005, and his colleagues released the deepest, most comprehensive survey to date of the ionized hydrogen that permeates the Milky Way. Now known to astrophysicists as the “Reynolds Layer” after the UW–Madison scientist who discovered it, the feature mapped by WHAM shows a massive amount of ionized hydrogen — a structure 75,000 light years in diameter and 6,000 light years thick — that both envelops the plane of the galaxy and rotates in step with it.

“It’s kind of like a galactic atmosphere,” says Haffner. “We’re tracing the same kind of emission in the visible part of the spectrum that gives rise to bright nebulae. But over much of the galaxy, it’s just very, very faint.”

Ionized hydrogen is one ingredient in the soup of elements that make up what astronomers call the interstellar medium, the patchy mix of dust and gas that exists between the stars. The materials found there are part of the big story of galactic life and death, says Haffner, explaining that the clouds of materials found in interstellar space come from dead and dying stars and ultimately will be recycled into new stars and planets.

The composition and dynamics of the interstellar medium, he says, can reveal how a galaxy evolves over time.

“Our galaxy is middle-aged,” Haffner says. Middle age for a galaxy means it is not going through the dramatic changes typically experienced by older or younger galaxies. “In that kind of steady state, how does everything work?”

A critical insight derived from WHAM is that some stars may be bigger actors than previously believed, exerting their influence at greater distances. Ionizing hydrogen or any other element requires energy, and stars are known to ionize atoms in their immediate neighborhoods. 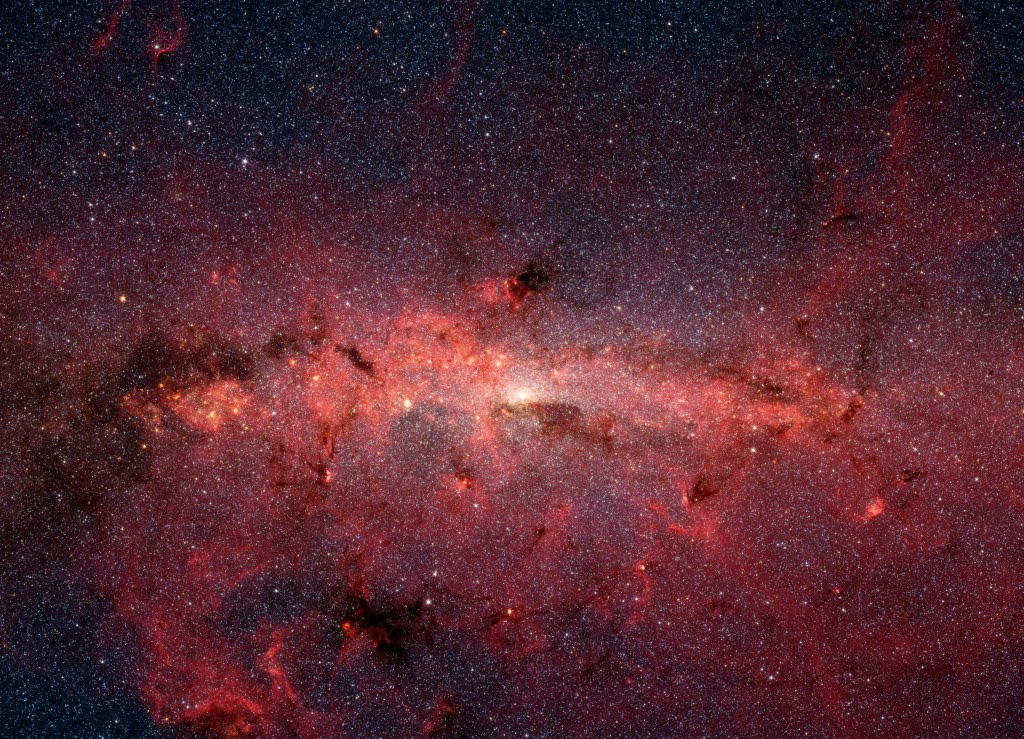 One reason WHAM observes so much ionized hydrogen in the plane of the galaxy is that lots of hot stars reside there. What puzzled astrophysicists, Haffner says, is how clouds of ionized hydrogen can occur light years above the plane.

“For us to see this emission everywhere, the gas has to be actively ionized,” he says. “What are the sources of energy that keep it going?”

What Haffner and other scientists think is happening is that what are known as O-type stars — very large, bright and relatively short-lived stars ranging in size from 15 to 90 times the mass of the sun and born deep in the plane of the galaxy — are somehow able to ionize gas across the galaxy, far from the stellar nurseries in its plane. Evidence for this idea was supplied by WHAM data, which in 2003 toppled the notion that ionized hydrogen in the galaxy occurred only in what are known as Strömgren Spheres, nebulae in the immediate vicinity of O-type stars.

WHAM may one day provide enough data to unravel the mystery of how hydrogen in interstellar deserts can be ionized, far from the stars astronomers think are responsible. It continues its survey of the galaxy on every clear, moonless night, stepping and gathering data in 30-second exposures across wide quadrants of sky.

More recently, Haffner and his colleagues have been gathering data from the Magellanic Clouds, two smaller neighboring galaxies visible from the Southern Hemisphere. Having data from galaxies beyond the Milky Way, he says, may well provide insight into the puzzles of our own galaxy.