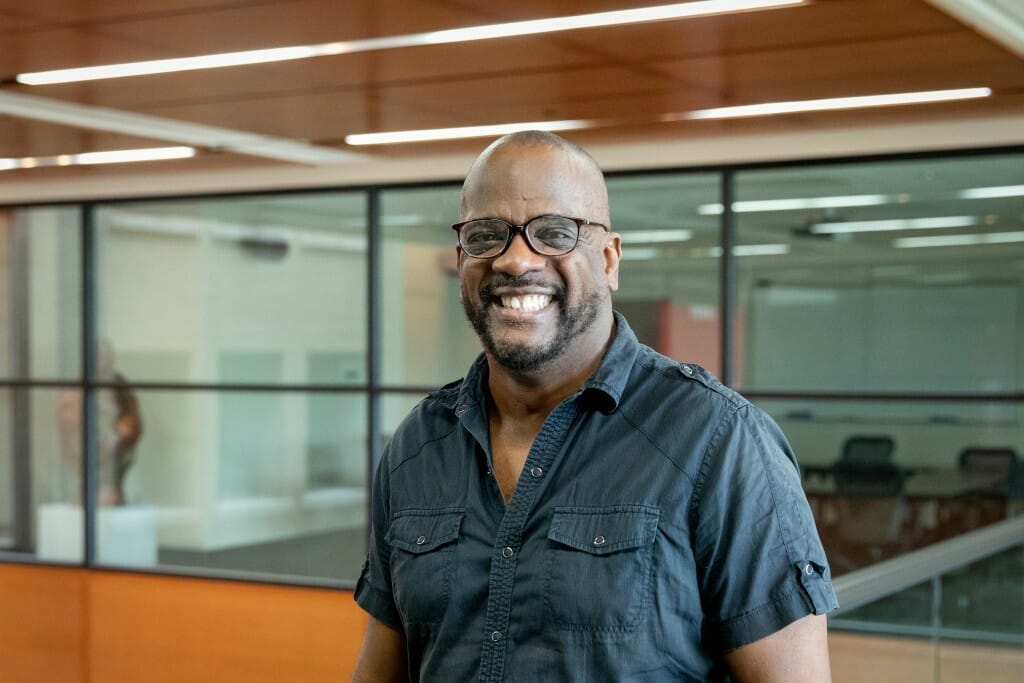 “The investiture as a Fellow of the College of Fellows of the American Theatre is a realization of my life’s goal,” says Baron Kelly, who holds a joint appointment as a professor with both the School of Education’s Department of Theatre and Drama, and the Division of Continuing Studies’ Department of Liberal Arts and Applied Studies, where he works with the Odyssey Project.

UW–Madison’s Baron Kelly is joining the prestigious College of Fellows of the American Theatre in the honorary society’s next incoming class.

Membership in the College is conferred on individuals of acknowledged national stature who have distinguished themselves during their careers for notable dedication, exceptional service, and outstanding achievement.

“I am very honored and overcome with emotion about my being given this honor,” says Kelly. “The investiture as a Fellow of the College of Fellows of the American Theatre is a realization of my life’s goal.  I am thrilled to be elected and join a class with so many incredible artists and educators. As a practitioner/scholar, I know the unparalleled scholarly and creative output of so many great artists, educators, and committed spirits who are comprised of the Fellows.” 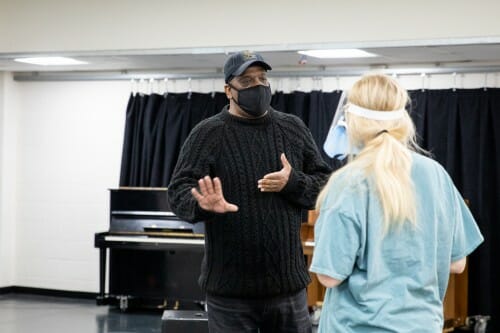 In a recent class, Kelly gave all four of his students face shield masks so that faces/expressions can be seen while acting out scenes.

Kelly arrived on campus as a faculty member prior to the start of the 2020 fall semester. He holds a joint appointment as a professor with both the School of Education’s Department of Theatre and Drama, and the Division of Continuing Studies’ Department of Liberal Arts and Applied Studies, where he works with the Odyssey Project. Prior to his current position, Kelly was serving as head of graduate acting and director of graduate studies at the University of Louisville.

Founded in 1965, The College of Fellows is an honorary society of outstanding theater educators and professional theater practitioners. Its membership includes: Pulitzer Prize- winning playwrights; Tony Award-winning actors, directors, and designers; artistic directors of Tony Award-winning theaters; administrators and artists from major regional theaters; academic administrators of distinguished theater programs; and eminent scholars of both the theory and practice of theater.

Kelly, one of seven new fellows to be invested in 2022, is recognized for his outstanding contributions in the field acting, teaching, and scholarship — with an emphasis on his international achievements. He will be formally recognized during a ceremony at the John F. Kennedy Center for the Performing Arts in Washington, D.C., in April 2022. At that time he will be presented with a medal and a citation summarizing his contributions to the American theater.

Not only is Kelly a faculty member at UW–Madison, but he is an alumnus who earned his PhD in theater research from the Department of Theatre and Drama in 2003. Since that time, he has spent the past 18 years returning to Madison to teach with the Odyssey Project, which offers low-income adults an introduction to college-level classes in the humanities. He also has a diploma from London’s Royal Academy of Dramatic Art, and a master of fine arts in acting from California State University, Long Beach.

Kelly says he got interested in this field as a young child who loved watching old movies on television and reading books on actors from Hollywood’s golden era to understand their journeys in the business.

He has gone on to become a four-time Fulbright Scholar and a member of the National Theatre Conference. Kelly has traveled extensively as a cultural specialist for the United States Bureau of Education and Cultural Affairs, teaching and lecturing on the theater in Africa, Europe, and Asia. His teaching of acting has led him to teaching and lecturing residencies in more than a dozen countries on five continents and in 20 American states. He has been a fellow at Harvard University’s W.E.B. Du Bois Institute for African American Research.

Film and television work include: “A Day Without a Mexican”; “Bird”; “Adventures of the Galaxy Rangers”; “As The World Turns”; “Loving”; “Frazier”; “Law and Order”; “The Innocent”; and “Majority Rule.”

Kelly’s work has been published in Theatre Journal; American Theatre; Routledge; African American National Biography; Stage Directors and Choreographers Journal; Slovo i Chas; Journal of Ukrainian Institute of Education and Science; Cambridge Scholars Publishing; Peter Lang Publishers; and the Journal of the institute of African Studies, among others.

His 2015 book, “An Actor’s Task: Engaging the Senses,” is available from Hackett Publishing Company.

The College of Fellows meets each year to induct new members, conduct board and business meetings, and honor select young people in various theatrical fields.