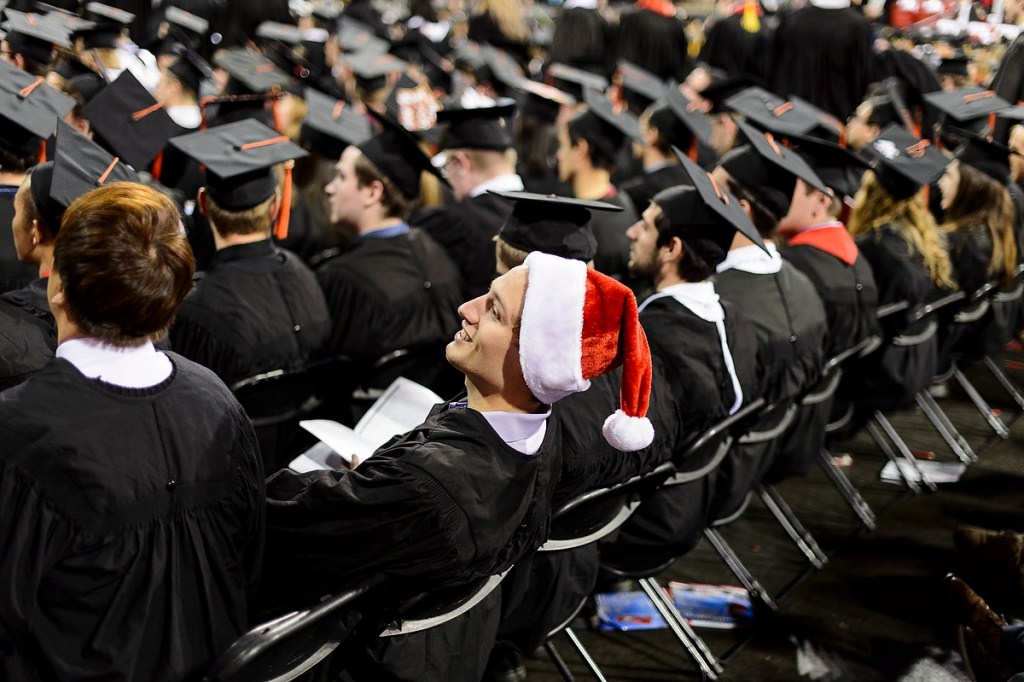 More than 1,000 students will take part in the University of Wisconsin–Madison’s winter commencement ceremony at 10 a.m. Sunday, Dec. 18, at the Kohl Center.

Those planning to attend are encouraged to allow extra time for travel as a winter storm is expected to bring snow and frigid temperatures beginning Friday through Sunday. View the latest forecast at www.weather.gov.

The university will have extra crews working on clearing nearby sidewalks, along with plowing for nearby city streets and parking lots. The approximately two-hour ceremony will be held as scheduled, regardless of weather. In the event of a severe weather situation, students would be notified of any chances in the ceremony through a WiscAlert.

Prohibited items include bags or backpacks larger than 8.5 by 11 inches, food, beverages, containers, strollers, baby carrier seats, laser pointers, noisemakers, weapons, selfie sticks, tripods, inflatables and any items deemed dangerous or inappropriate. All items and spectators are subject to search. Storage facilities are not available for checking prohibited items. Items left at gates will be disposed of accordingly.

For those unable to attend, the ceremonies will stream live at http://commencement.wisc.edu.

Keynote speaker Capt. James A. Lovell, Jr. will deliver the charge to the graduates at the ceremony and also receive an honorary degree. Lovell is one of only 24 people to go to the moon and back. He was on two Gemini and two Apollo missions between 1965 and 1970.

His book, “Lost Moon: the Perilous Voyage of Apollo 13,” was the basis of the Academy Award-winning movie, “Apollo 13,” in which he was portrayed by Tom Hanks. Lovell graduated from Juneau High School in Milwaukee and attended UW–Madison for two years, participating in the university’s Naval Reserve Officers’ Training Corps before he was accepted to the United States Naval Academy, where he graduated with a bachelor of science degree in 1952.

Other speakers include Chancellor Rebecca M. Blank, Provost Sarah C. Mangelsdorf, Board of Regents President Regina M. Millner, Martinez White, a 2010 graduate of UW–Madison and a member of the Wisconsin Alumni Association’s President’s Advisory Council, and student keynote speaker Terrence Thurk, who will graduate with a major in mechanical engineering.

For the first time ever, the student keynote speaker was chosen via an audio or video submission. On campus, Thurk was a core leader in Students Today Leaders Forever (STLF), where he led more than 120 Badgers to serve in communities across America. He’s a strong believer in the Wisconsin Idea. “UW-Madison has transformed from a self-conscious and socially award freshman boy to a confident young man who is not only ready, but excited to tackle the challenges that lie ahead,” Thurk says. Read more.

Farming in his blood: Ryan Seffinga grew up next to a John Deere dealership in Durand, Wis., and he’s remained focused on farming. He even spent a summer on an ATV collecting agricultural data in farm fields. The biological systems engineering major in the College of Agriculture and Life Sciences is excited about the future of agriculture. “I now know that the agricultural industry is investing more money into the precision side of things. By remaining in this part of the industry, I can expect tremendous opportunities to present themselves, especially in new product development,” says Seffinga. Read more

An invention that bags a nuisance: Matthew Hamilton of Woodbury, Minn., came to UW–Madison with a problem he wanted to solve. “The common buckthorn, one of the most troublesome invasive trees in the Midwest, forms a dense thicket that crowds out native plants. Cut to the ground, it springs back, Hydra-like, with up to a dozen eager offshoots that form an equally appalling forest monoculture.” Hamilton is majoring in mechanical engineering and as an undergraduate he created the Buckthorn Baggie, which when placed on the stump and left for a year will kill the plant. Read more

Ensuring educational opportunity: Marla Delgado-Guerrero of Omro, Wis., who is getting her Ph.D. in counseling psychology, has made an impact here on campus and hopes to continue to make a difference in years to come. Her research examines psychological, social, and cultural factors that influence academic persistence for marginalized communities, particularly Latinas/os, in higher education. As an undergraduate, she helped to establish the first historically Latina-based sorority, Lambda Theta Alpha Latin Sorority, Inc. on campus. She now works as a staff psychologist and diversity coordinator at the Marquette University Counseling Center. Read more

Exploring development: Drew Hasley’s doctoral research in genetics focused on two main questions, “How do you go from a single cell to a fully functioning organism with, in the case of a human, trillions of cells?” and “How does development happen?” Hasley, of Grand Junction, Colo, also happens to be legally blind. He now hopes to find a position that includes formal or informal teaching and public outreach, as he wants to help improve biological education so that students can be successful in whatever field they choose. Read more